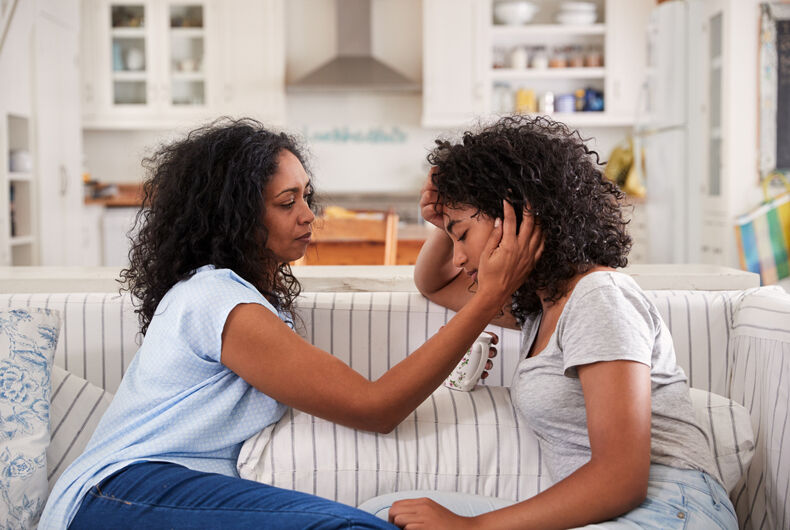 Today is World Suicide Prevention Day, a global day of awareness around suicide and promoting ways to prevent it.

Suicide remains a major concern, especially within the LGBTQ community. A 2019 study had this stark fact amongst its findings: young LGBTQ people are five times more likely to attempt suicide than straight people.

The Trevor Project has found that suicide remains the second leading cause of death among 10 to 24 year olds, with lesbian, gay, and bisexual youth contemplating suicide at nearly three times the rate of straight youth.

Among transgender people, a 2016 study in the Indian Journal of Psychological Medicine showed that the rate of attempted suicide is anywhere from 32% to 50% across all countries, largely due to stress factors around a lack of acceptance, harassment, and bullying.

Organizations like the World Health Organization (WHO) and Center for Disease Control & Prevention (CDC) are sharing resources to spread the word about actions that can largely prevent suicide.

According to WHO, more than 700,000 people commit suicide each year.

The CDC shared five actions steps created by the National Suicide Prevention Lifeline under the #BeThe1To campaign: being the one to ask, keep someone safe, be there for someone, help someone connect with others, and follow up with someone is often all that is needed to prevent suicide.

Today is #WorldSuicidePreventionDay. We can all take action to prevent suicide. #BeThe1To:
• Ask
• Keep Them Safe
• Be There
• Help Them Connect
• Follow up

LGBTQ community advocates, such as Rep. Marie Newman (D-IL) — who is a nominee for LGBTQ Nation‘s Hero Rebuilding America — shared what they’re doing to prevent as many LGBTQ youth and others from committing suicide.

Let's also look at how these rates change by demographic.

40% of LGBTQ+ youth have said they seriously considered suicide.

If you or a loved one are struggling with mental health and thoughts of suicide, help is available. Even if there isn't a student-focused hotline in your state, please call the national line at 1-800-273-8255.

We are here to help. #SuicidePreventionWeek

Other lawmakers have also chimed in to recognize the occasion. President Joe Biden issued a proclamation which seeks to “call upon all Americans, communities, organizations, and all levels of government to join me in creating hope through action and committing to preventing suicide across America.”

It’s #WorldSuicidePreventionDay and a reminder that sometimes just one conversation can save a life. Please know: there is always someone available for support.

There is no shame in asking for help. If you are struggling and in need of support and mental health resources, you can contact the National Suicide Prevention Lifeline 24/7 by calling 1-800-273-8255.

Remember: You are not alone. #WorldSuicidePreventionDay

Today is #WorldSuicidePreventionDay. Please remember that you are not alone. You can ALWAYS call 1-800-273-8255 and speak to someone immediately. pic.twitter.com/56IAPVawtH

On #WorldSuicidePreventionDay, we remember those we’ve lost and redouble our efforts to prevent suicide.

On this #WorldSuicidePreventionDay, @POTUS has called attention to the alarming rates of suicide nationwide, especially among LGBTQ+ people.

Biden pointed out that suicide was a top ten cause of death in the United States in 2019, and the second highest for all youth in America, noting the numbers are “even higher among LGBTQ+ and Native American youth.”

Biden explained how he signed a bill into law allocating close to $600 million dedicated to suicide prevention for veterans with mental health care and awareness. He also has proposed to fund mental health programs under the Department of Health and Human Services, such as the National Suicide Prevention Lifeline, with an expanded $180 million budget. $20 million in youth suicide prevention funding was included in the American Rescue Plan that passed this year as well.

Biden, like many others today, called for anyone considering suicide or dealing with suicidal ideation to contact someone and know that they can seek help. In addition to the currently available National Suicide Prevention Lifeline (by calling 1-800-273-TALK) and Crisis Text Line (by texting HOME to 741741), in 2022 there will be a national Mental Health Crisis Line that can be reached by contacting 9-8-8.

“By expanding the crisis line and investing in our Nation’s crisis care infrastructure, we have the opportunity to prevent suicides and save lives,” said the President.

In the meantime, there are also many places to reach out to if you or someone you know is suffering from self-harm or suicidal ideation, whether they are LGBTQ youth, outside of the United States, have access to firearms, and more.

During #WorldSuicidePreventionDay, remember you are not alone 💛 art by @gemmacorrell 🎨

Today needs you, tomorrow does, too.

If you or anyone you know need help, reach out.#WorldSuicidePreventionDay pic.twitter.com/3VaL6MSeUi

On #WorldSuicidePreventionDay, we’re highlighting policy solutions to the firearm suicide crisis, such as passing extreme risk and secure storage laws, creating public awareness about the risk posed by guns in the home, and providing resources to prevent suicide. pic.twitter.com/EVu3VYJGuw

If you need support, The New York City LGBT Center is here for you, no matter where you are. Give us a call at 212.620.7310 or visit https://t.co/72RY3ouRiX to learn more or find support.#WorldSuicidePreventionDay

If you or someone you know in the United States needs help, know that you’re not alone. You can call the National Suicide Prevention Lifeline at 1-800-273-8255.

If you or someone you know needs someone to talk to, know that the Trevor Project is here 24/7, and can be reached by phone at 1-866-488-7386 or text and chat at www.thetrevorproject.org/get-help-now.

Today is #WorldSuicidePreventionDay. Days like today can be triggering in and of themselves for people who are already haunted by ideation or loss. For those hurting, please be extra gentle with your heart today. For those seeking help, please use any resources I’ll link below.

Today is #WorldSuicidePreventionDay. This is the pic I took one year after I made a last minute decision to drive myself to the hospital for help instead of following through with the plan I had.

We can find our way through the darkness. I love you. So much. pic.twitter.com/FRolsM8wOL

Every 40 seconds, someone in the world dies of suicide. We all have the ability to create hope through action. Remind those in your community, and those you love, that they aren't alone. Reach out. Be kind. Take action. And give hope. #WorldSuicidePreventionDay

hey besties today is world suicide prevention day and if ur a young lgbtq kid and the internet feels like the only place u can be yourself, i just wanna remind u that there are actually places like that in real life and one day u will be in them. keep hangin on bff

A reminder: you never know what someone is going through.#WorldSuicidePreventionDay

TrevorLifeline, a suicide prevention counseling service for the LGBTQ community, can be reached at 866-488-7386. You can also chat with them online. @TrevorProject

Trans Lifeline provides trans peer support for our community that’s been divested from police since day one. It is run by & for trans people. 877-565-8860 @TransLifeline