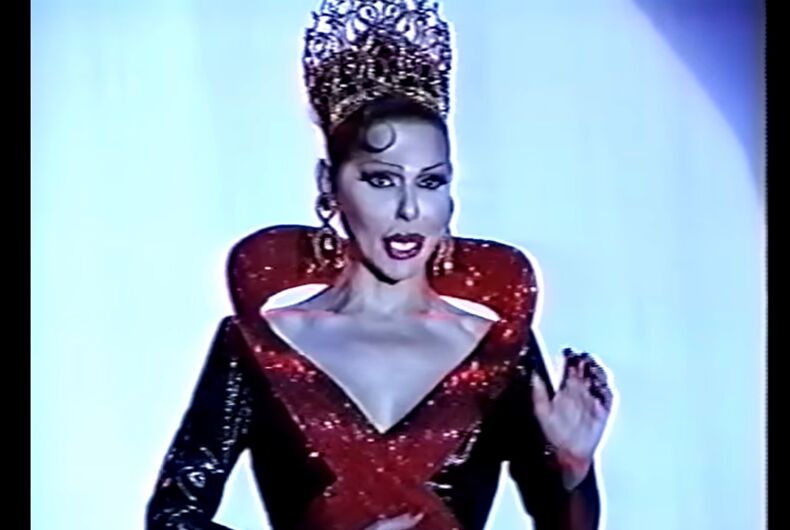 When overviewing the fight for LGBTQ rights in America over the last 50-plus years, the contributions of many Hispanic LGBTQ people are often not recognized. Some Hispanic LGBTQ people such as Sylvia Rivera are remembered in recounts of LGBTQ history, but there are many others you may not hear about often enough.

September 15 to October 15 marks Hispanic Heritage Month in the United States, segueing into LGBTQ History Month in October so there’s no better opportunity than now to learn about more trailblazers and icons.

Related: Take a moment to remember these out LGBTQ veterans you may not know

In a presidential proclamation declaring this year’s Hispanic Heritage Month, President Joe Biden wrote, “We recognize that Hispanic heritage is American heritage. We see it in every aspect of our national life: on our television and movie screens, in the music that moves our feet, and in the foods we enjoy.”

Similarly, Hispanic heritage is LGBTQ heritage. Many LGBTQ Hispanic people played a major part in gaining the rights we enjoy now, and while many of them continue to fight for our rights, we take this opportunity to recognize those that fought in America without enough recognition for years.

Conrado Morales, writing under the pen name Nicholas Dante, became globally acclaimed when he wrote the music to the musical A Chorus Line. His own experiences as a dancer trying to make it in New York City contributed to the storyline, specifically to the character of Paul.

A Chorus Line would go on to win a Pulitzer Prize for Drama, a Tony Award, and a Drama Desk Award after debuting in 1975. Much of its acclaim came following its touring revival in 1990.

Dane continued to write screenplays such as Fake Lady and Jolson Tonight, which weren’t produced in his lifetime. He passed away on May 21, 1991.

Antonio Lopez was born in Puerto Rico in 1943 and moved to New York at the age of seven. Growing up in the 1950s, Lopez studied fashion at the legendary Traphagen School of Fashion, followed by the Fashion Institute of Technology.

He became an illustrator for Women’s Wear Daily (WWD) Magazine and the New York Times in the 1960s. His work also appeared in Vogue, Elle, Harper’s Bazaar, and other influential magazines.

Contemporaries with the likes of Andy Warhol, Lopez moved to Paris with his collaborator and partner Juan Eugene Ramos, where he would come to meet and “discover” many friends and associates in the fashion world who would go on to success and fame, some becoming known as “Antonio’s Girls.” His associates included designer Karl Lagerfeld, actresses Jerry Hall, Jessica Lange, and models Grace Jones and Tina Chow.

After publishing the book Antonio’s Tales From the Thousand and One Nights, and beginning to curate his work into an exhibit known as 25 Years of Fashion, Lopez passed away in 1987 from AIDS-related complications.

Ray Navarro was an activist with ACT UP that founded the network Diva TV. Born in 1964 and originating from Simi Valley, California, Navarro went on to become an AIDS activist by 1988, and in 1989 he became a “camp superstar” when he dressed as Jesus Christ for a New York City protest of the Catholic Church.

Navarro was diagnosed with AIDS in January 1990 and died in November at the age of 26. A “self-portrait” series Equipped, photographed by Zoe Leonard and using mobility devices belonging to Navarro as he became disabled later in his life, became influential once displayed at museums across the country. His mother, Patricia, continued being an AIDS activist following his death.

Antonio Pagán was elected as one of the first out members of the New York City Council in 1991. He served from 1992 to 1997 representing much of the Lower East Side. Known for his conservative policies, he eventually became the commissioner of the Department of Employment under Mayor Rudy Giuliani.

He left politics after the Giuliani administration ended, retiring instead to go to culinary school. Pagán died in 2009 at the age of 50, but he was remembered as proud gay and Latino community advocate.

Dr. Antonia Pantoja is remembered most as the founder of the ASPIRA Association, a Latino youth and education association. She also founded Boricua College in New York, the National Puerto Rican Forum, and the Graduate School for Community Development at San Diego State University (SDSU).

ASPIRA pushed for education reform, including landmark agreements with the Department of Education in New York that cemented the need for bilingual education access for Spanish-speaking students. In 1996, Pantoja was the first Puerto Rican woman to receive the Presidential Medal of Honor.

Pantoja became partners with Dr. Wilhelmina Perry, and they retired to Puerto Rico in the 1980s — but returned to New York City and remained proudly “Nuyorican” before she passed away from cancer in 2002 at the age of 80.

A lot of what is known about lesbian and queer women’s history was documented or cataloged by Yolanda Retter. She was the founding archivist of the Lesbian Legacy Collection at the ONE Archives, the largest existing depository of LGBTQ information available. She also volunteered at the June Mazer Archives and was a founding member of Lesbianas LatinaAmericas.

Born in 1947 in Connecticut, Retter lived much of her life in El Salvador and Los Angeles. She earned multiple degrees with focuses on library studies, sociology, and social work. She would become a key writer of history with Lesbian News and editor of the Lambda Literary Award-winning book Queers in Space: Communities, Public Places, Sites of Resistance, published first in 1997, among many other publications.

Beyond LGBTQ history, she cataloged Hispanic history as the head of the Los Angeles Public Library Chicano Resource Collection for years. She also was the founding publisher of the Los Angeles Women’s Yellow Pages. She passed away in 2007.

Catiria Reyes was a trailblazing drag performer and trans woman who moved from Puerto Rico to New York by the time she was 19. She became a regular, and unforgettable, performer at the La Escuelita Club in Manhattan in the 1980s.

“I then thought I was dying of AIDS, but I now realize that I am not dying of AIDS. I am living with AIDS because you loved me,” she told the audience.

Reyes passed away on May 3, 1999. She was buried back in Puerto Rico but memorialized by drag performers across the country.

José Julio Sarria became known as a drag performer, but he also was a pioneer for LGBTQ politicians by becoming the first out politician to run for office in the United States when he ran for a city supervisor seat in San Francisco in 1961. He finished ninth out of 30 candidates for the five positions, garnering over 6,000 votes.

“From that day on,” Sarria said thereafter, “there’s never been a politician in San Francisco — not even a dog-catcher — that did not go and talk to the gay community.”

A regular performer at the famous Black Cat Café, Sarria founded multiple LGBTQ organizations, such as the International Imperial Court System (IICS) and the Society for Individual Rights (SIR). He has held multiple imperial titles in drag culture, most notably Her Royal Majesty, Empress of San Francisco, José I, The Widow Norton.

He appeared in the 1995 film To Wong Foo, Thanks for Everything, Julie Newmar as a judge, and the San Francisco’s Castro District named a part of Castro Street after him.

Bárbara “Soraya” Santiago Solla became a lightning rod for LGBTQ people (although she didn’t consider herself one) when she became the first person to petition the government in Puerto Rico to change the gender designation on her birth certificate in 1976.

Solla had left Puerto Rico as a child due to negative treatment due to her effeminate ways, which she later attributed to gender dysphoria. After getting gender-affirming care, however, she moved back after turning 28 and opened a hair salon.

Her ex-husband, Héctor Mejía Santana, was allowed to emigrate to Puerto Rico after the couple got married, becoming one of the first known spouses of someone who had legally transitioned to successfully emigrate to the island.

Romulo Yanes only died three months ago after an inspiring, trailblazing career as arguably the most successful photographer ever featured in Gourmet Magazine, the first publication in America dedicated to food and wine. While the magazine has ceased to publish today, its former publisher Conde Nast has continued to use its branding in future food and wine projects, building off the reputation and respect staffers such as Yanes gave it.

Between contributing to countless issues, dozens of other publications, and several books and films, Yanes’ work was seen by millions around the world and undoubtedly inspired several other food and wine photographers that have come along since. He worked on books for former First Ladies Hillary Clinton and Jacqueline Kennedy-Onassis.

Yanes passed away in June 2021. He was survived by his husband Robert Schaublin-Yanes.

Pedro Zamora arguably introduced more of America to LGBTQ people and the HIV/AIDS crisis for the first time than anyone else on non-scripted television in the 1990s. Zamora was born in Cuba and immigrated to the United States at the age of eight, growing up in Florida in the 1980s.

Zamora was out to his supportive father by 14. When he was 17, in 1989, he attempted to donate blood to the American Red Cross, but he was told his blood was ‘reactive,’ and he learned from an HIV test in November that he was positive.

Zamora became an activist and educator thereafter, traveling to speak at engagements across the country and testifying before Congress. He met his partner, Sean Sasser, at the 1993 Lesbian and Gay March on Washington.

Zamora decided to audition for an MTV reality series called The Real World, and he was selected for the show’s third season in San Francisco. He moved into a house with six other roommates in 1994, and while living there his illness developed into AIDS.

One of television’s earliest defining moments came when Zamora, with his health declining, decided to move out due to the homophobic treatment he received from roommate Puck Rainey. Unanimously, the other roommates all decided to vote for Rainey to move out instead so Zamora could stay. Later, Zamora had a commitment ceremony with Sasser at the home they were filming in, making it the first same-sex union aired on television.

By the time The Real World castmates moved out and the show began airing, Zamora, 22, had become even sicker. While his story inspired and educated an entire generation, he was close to succumbing to the illness. President Bill Clinton phoned him and thanked him for his work on September 3, 1994.

Clinton allowed Zamora’s brothers in Cuba to come to the United States, a precedent-breaking decision that allowed for other Cubans to come to America for years to come. Zamora passed away on November 13, 1994, the day after the final episode of The Real World: San Francisco aired.

The National AIDS Memorial created the Pedro Zamora Young Leaders Scholarship in his honor, and the movie Pedro (2008) memorializes his life.

Is Jen Psaki behind an “intimidation” campaign against a wacky Christian White House reporter?

School community rallies for lacrosse coach fired for being a lesbian