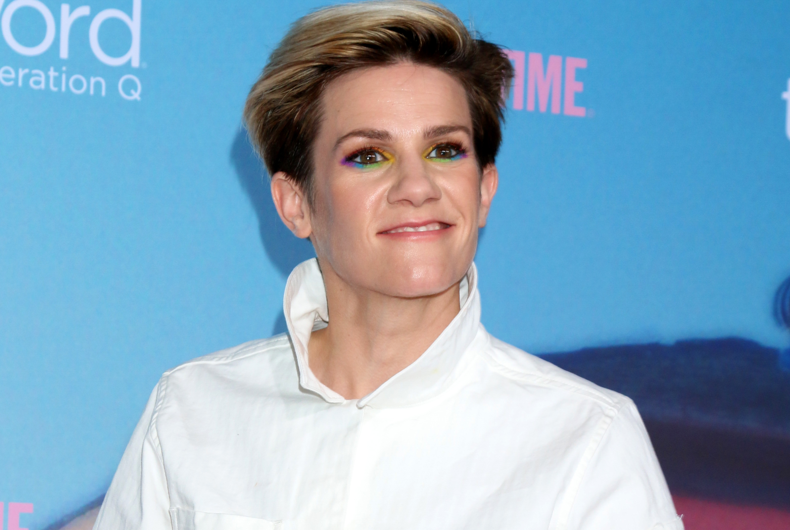 Comedian Cameron Esposito is among the thousands speaking up and speaking out against Benet Academy, a prestigious Catholic school outside of Chicago, because the school decided not to hire a woman they initially began hiring — because that woman has a wife.

Esposito, an alum of the Academy who graduated in 2000, said on Twitter, “Actively harming children in the name of faith is monstrous, [especially because] this coach could have been a positive role model for queer students who may not be able to safely be out. If u can’t hire the best person for the job, maybe u shouldn’t be a school.”

The woman who had her job rescinded is Amanda Kammes, although neither her nor Benet Academy has publicly confirmed that they refused to hire her. The Chicago Tribune received a veiled statement from a school spokesperson claiming, “Benet Academy respects the dignity of all human beings to follow their conscience and to live lives of their choosing.”

“Likewise, as a Catholic school, we employ individuals whose lives manifest the essential teachings of the Church,” the school stated, “in order to provide the education and faith formation of the young people entrusted to our care.”

On September 20, more than 40 people from the school community, mostly alumni but also parents and students, protested outside of the school’s campus. The day before — a Sunday — Head of School Stephen Marsh issued a statement claiming that wearing rainbow  colors “can be confusing and ambiguous” and suggesting that kids will look at them because they’re a “wonderful kaleidoscope of colors.”

The day of the protest, the Benet Academy community — a school of about 1,500 students — delivered a petition with a reported 2,200 signatures objecting to the Academy’s decision and stating, “We are ashamed of your narrow interpretation of Christian morality.”

Signs were carried shaming the school for their decision and one read, “What would Sheila do?” which included a photo of Sheila Jacklich, the grandmother of one of the chief protestors, Tim Jacklich. Sheila was a longtime teacher and dean at the school before passing away in 2011.

A rainbow showed up in the sky in support of the protest.

Coincidence? Nature provides background for LGBTQ support demonstration outside Benet Academy. Parents say the school discriminated against a female lacrosse coach after she listed her wife as her emergency contact on work papers. @fox32news pic.twitter.com/897GdvDkJT

“We write to express our dismay and anger at the news that Benet Academy recently declined employment to an otherwise qualified candidate on the basis of her marriage to another woman,” the petition reads. “By rejecting a talented potential staff member on the basis of whom she loves, you have utterly failed to uphold the principles of dignity and charity that you purport to practice as Christian institution.”

According to a current assistant coach at Benet, Kammes had a distinguished resume that included two championships in the state of Pennsylvania at previous jobs.

“The girls look up to her. She would just be an outstanding person to be a high school coach here,” assistant Colleen Savell said to the Tribune.

Kammes, an alum of Benet, was reportedly hired and started preparing to coach through the year. All was going good with her onboarding process for the position, until she listed her wife as an emergency contact with the school.

17 year-old senior Brenna Davidson called it “honestly devastating.” Hoping for at least an apology and acknowledgement from the school of their exclusion, Davidson said, “The way they handled this, they’re not setting a good example for the student body.”

While much of the Benet Academy community is dismayed, this has not surprised them, chief among them being Esposito, who says the school has long refused to be a safe space for LGBTQ students and others in the community.

Esposito, the genderfluid host of the Queery podcast and co-creator and co-star of the sitcom Take My Wife with their former partner RB Butcher, took to Twitter to take the school to task — and that’s not all, either.

“Oh my good lord,” Esposito wrote. “My high school, Benet Academy in Lisle, IL denied employment to a coach bc she listed her wife on her application… She is highly qualified… Students & alums are protesting.”

“A student organized bid to wear rainbow colors to school was met with a letter from the head of school that said rainbows are too complex for young adults to understand & encourage a ‘lifestyle’ the Church ‘in her wisdom, does not & cannot condone,” they continued.

“The damage this does to queer students who DEFINITELY attend Benet right now will be lifelong — trust me,” Esposito warned. “To be taught god hates you… By the places that teaches you math… Is too much for anyone to handle.”

“Anyway, I called the head of school and left a message,” the 2000 alum shared. “I’m not expecting policy change but he should hear from an adult who was done harm there.”

“I will keep calling.”

My high school, Benet Academy in Lisle, IL denied employment to a coach bc she listed her wife on her application

She is highly qualified

The damage this does to queer students who DEFINITELY attend Benet right now will be lifelong — trust me.

To be taught god hates you

By the places that teaches you math

Is too much for anyone to handle

Actively harming children in the name of faith is monstrous, esp bc this coach could have been a positive role model for queer students who may not be able to safely be out.

If u can’t hire the best person for the job, maybe u shouldn’t be a school.

Anyway, I called the head of school and left a message. I’m not expecting policy change but he should hear from an adult who was done harm there.

I will keep calling.

Students: pls can we have sex ed
Schools: we will protect u from 🌈

Esposito also spoke to the Tribune, telling the newspaper that “It’s really damaging for your school — the same place you learn facts like mathematics — to tell you that there’s something wrong with who you are.”

But the comedian does find the support from the school community “amazing” and they wish they had it when they were there.

“I didn’t have the life experience to fight for myself, and I love that students are getting the chance now to fight for themselves and for others,” they said.

Illinois has non-discrimination laws in place, but because the school observes a religion, they can claim the reason they chose not to hire her was due to religious freedom, even though the lacrosse coach position is ostensibly secular.

The school board of directors reportedly met yesterday amidst the protest and will issue a public statement today.

It is a Catholic school, which means this can happen and still shouldn’t.

It’s not surprise. It’s being an adult with a small platform and openly saying this is sad and awful.