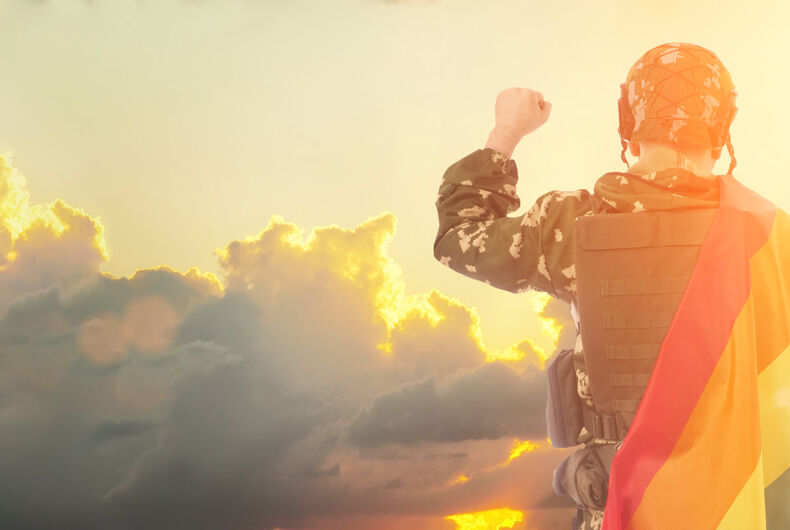 This Memorial Day, Americans all over will be remembering and recognizing the sacrifice that military veterans have made over the last 250 years.

Unfortunately, due to years and years of anti-LGBTQ discrimination and laws banning people from openly serving, there’s not many ways to recognize or highlight specifically gay, trans, or queer servicemembers — although we know that many of them existed, from as early as the American Revolutionary War to as recently as the War in Iraq & Afghanistan. It was only this year that the recent ban on trans people serving in the military was lifted, thanks to President Joe Biden (D).

Related: The Army found out this colonel was a lesbian. The woman that oversaw her discharge was, too.

Still, we managed to find seven people who served in the military and were out throughout their life, many after serving, but some during. These seven did not lose their lives in military action, but sacrificed their lives in other ways, and we recognize them in lieu of the hundreds or thousands of servicemembers who did die while serving but we all aren’t able to name.

Their willingness to protect a country that has, at most times, not been out to protect them made it possible for many to be proudly out and serve in the military today — despite the people who try to stand in the way of that progress today, such as the last presidential administration.

Capt. Antonio Davon Brown was in the United States Army Reserves, and served an 11-month tour in Kuwait from 2010 to 2011. Brown lost his life as one of the 49 victims of the Pulse Nightclub Massacre on the night of June 12, 2016. He was 30 years old.

Brown was a 2008 graduate of Florida A&M University and studied criminal justice there. He was working as a human resources officer for the Army at the time of his death, and had earned a Meritorious Service medal.

Friends described him as “someone who would call you at night to tell you that your favorite food was on sale at the supermarket,” according to the Orlando Sentinel. Born and raised in Orlando, he is buried in Brevard County, Florida.

Since his death, his mother Rosetta Evans fought to prevent the release of audio tapes that captured the night of Brown’s death, and has refused to listen to them. “The cries and screaming of death is not a sound to be played over and over,” she wrote to the city of Orlando.

On the two-month anniversary of the #Orlando tragedy, we remember Antonio Davon Brown. #StoptheHate @Caitlyn_Jenner pic.twitter.com/1rLFK3u6g9

Stewart McKinney was a Republican Congressman representing the state of Connecticut at the time of his death. Prior to that, he served in the United States Air Force from 1951 to 1955 and was ranked as a sergeant.

Chronographically, McKinney would become the first known LGBTQ person to serve in Congress when he was elected in 1971, but he would not be outed until after his death from AIDS in 1987. It’s believed he contracted HIV from a heart operation in 1979.

While he was married and had five children, his lover Arnold Denson and his friends confirmed at the time of his death that he was bisexual, and his obituary reflects that.

The ambiguity of McKinney’s sexuality was a key reason that Barney Frank, the first gay Congressmember to come out on his own, chose to come out in 1987. He wanted to avoid the “unfortunate debate about ‘Was he or wasn’t he? Didn’t he or did he?'” around McKinney.

“I said to myself, I don’t want that to happen to me,” Frank said.

This is a picture of me and my father, Congressman Stewart McKinney from 1970. He served in Congress from 1971 until his passing in 1987. He served 2 terms with your dad. I think about him every day. 1/2 #deaddadsclub pic.twitter.com/tUDAlm4S60

Jon Hinson was another member of Congress, just entering his second term as a Representative from Mississippi in February 1981 when he was arrested for oral sodomy, still a crime at the time. Hinson, married to his wife Cynthia at the time, was arrested by Capitol Police after being caught with an employee of the Library of Congress in the bathroom in the Longworth House Office Building.

His charge carried a punishment of up to 10 years, but prosecutors agreed to reduce the severity of his charges and he was never imprisoned. Still, he had to serve a year on probation and receive medical treatment as part of his plea deal. He resigned in April 1981, came out, and famously never returned to Mississippi.

A reservist in the United States Marine Corps prior to his election to Congress, Hinson relocated to Virginia and fought against the military ban on gay people. He also was a founding member of the Fairfax Lesbian and Gay Citizens Association.

Hinson died in 1995 at the age of 53 from AIDS-related respiratory failure.

Harris Wofford, among his many other accomplishments, is the only known LGBTQ man to serve in the United States Senate. The Democrat from Pennsylvania served only four years in the chamber after winning a special election. He lost re-election to one Rick Santorum in 1994.

Wofford contributed to American society more outside of Capitol Hill. He fought in World War II as a member of the Army Air Forces. Then he became an activist and supported the civil rights movement, first as the first white student at Howard University Law School and a subsequent legal assistant to the United States Commission on Civil Rights, and then as a staff member of the Kennedy campaign and administration.

He convinced Kennedy to call Corretta Scott King after Dr. Martin Luther King Jr. had been arrested and sentenced to prison labor on a traffic infraction. That led to Dr. King’s father endorsing Kennedy, which led to several crucial votes for Kennedy in the tight 1960 election.

Wofford had been married to his wife, Clare, who died in 1996. Two decades later at age 90, he came out publicly and announced he was marrying his second “best friend,” Matthew Charlton, in 2016. Wofford passed away on January 21, 2019.

Frank Kameny had served in the Army after being drafted, and served in World War II. After the war, he would be on the board of the United States Army Selective Service, responsible for drafting citizens, for 20 years. He graduated from Queens College and then Harvard University with a doctorate in astronomy.

While working as an astronomer for the Army Map Service in 1957, Kameny was fired for his sexuality. He took the Army to court and fought back against the government’s anti-gay rules. He was the first gay person ever to appeal their firing to the United States Supreme Court, and wrote his own legal briefs after his attorneys gave up on the case.

His case ultimately failed, but set the path for the legal battles for LGBTQ rights that would become fruitful in the decades to come. Afterwards, Kameny dedicated himself to LGBTQ activism.

He famously remarked, “I have resented for over 60 years that I had to lie to fight for my country during World War II.”

Kameny passed in 2011 at age 86, on National Coming Out Day. His story is most recently chronicled in the book The Deviant’s War: The Homosexual vs. the United States of America by Eric Cervini.

Baron von Steuben was widely known as a gay man, but also a genius military strategist, when Benjamin Franklin sought his expertise at the start of the American Revolutionary War.

The “Lieutenant General,” as he was mistakenly designated by Franklin in a letter to George Washignton, was facing prosecution and ostracization in Prussia when he was bought in to shape the newly-formed Continental Army. Franklin knew of the rumors around von Steuben’s sexuality and “affections” for younger men, but felt his service was needed anyway and bought him to America.

He whipped the rag-tag army of the colonies into a professional fighting force, able to take on the most powerful superpower of the time, England. Some of his accomplishments include instituting a “model company” for training, establishing sanitary standards and organization for the camp and training soldiers in drills and tactics such as bayonet fighting and musket loading.

Washington rewarded von Steuben with a house at Valley Forge, which he shared with his aide-de-camps Capt. William North and Gen. Benjamin Walker. Walker lived with him through the remainder of his life, and von Steuben, who neither married nor denied any of the allegations of homosexuality, left his estate to North and Walker. Leaving the military as a Major General, von Steuben died in 1794.

It’s hard to question von Steuben’s importance — especially as Washington’s last official act as commander-in-chief of the Continental Army was to write a letter to the baron. He has been recognized in the current day as “the gay man who saved the American Revolution.”

The Navy started construction on the ship in December 2019. It is the first of six ships that will be in the John Lewis fleet class, led by the USNS John Lewis, named after the civil rights leader of the same name.

In time for Harvey Milk Day, the Navy reported that the USNS Harvey Milk is more than halfway completed.