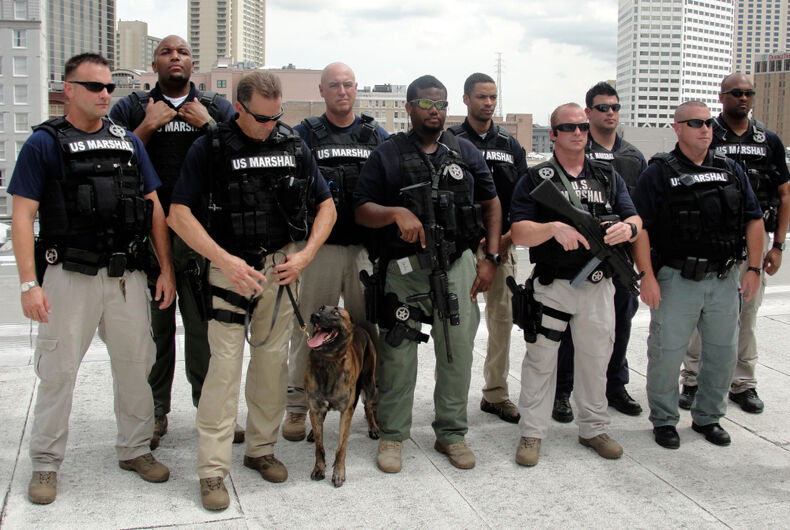 A U.S. Marshal is saying that he’s being fired just 70 days before retirement because he stood up for a lesbian woman who was facing horrific harassment at work – including male officers peeing in the cookie jar on her desk.

“To have this exposed, that you had U.S. Marshals and local police officers sexually harassing, assaulting, bullying, degrading and mocking a female U.S. Marshal who is a lesbian, that’s a nice big black eye against the government,” Supervisory Deputy U.S. Marshal Bobby Ledogar told The Daily Beast.

Related: A lesbian firefighter faced disgusting harassment at work. She won her lawsuit.

“And it’s going to come out that one supervisor defended her, and the investigation of the female’s initial complaints was done by the same people she did a complaint against? You didn’t even let internal affairs do it? You investigate yourself? We’ve all seen a history of how that works out.”

In 2015, Deputy U.S. Marshal Dawn Mahoney went to Ledogar for help. He was her supervisor and she was facing relentless harassment at the workplace, she said.

Mahoney, an Army vet, compared her office culture at the New York/New Jersey Regional Fugitive Task Force to the movie Animal House, but with guns.

She said someone urinated in a cookie jar on her desk, that a colleague grabbed her by the waist and said, “Look at you, you sexy bitch, and even more serious events that put her life in jeopardy while in the field.

Mahoney was already filing a complaint with the U.S. Marshals Service Office of Equal Employment Opportunity, saying that the “premeditated” harassment was intended to make her feel unsafe and was because of both her gender and sexual orientation.

She believes that part of the issue is that she was picked for the Fugitive Task Force, an elite position for U.S. Marshals.

“There were so many male deputies that desperately wanted that opportunity,” she wrote in a letter of support for Ledogar, explaining that he picked her for the open position over the men who also wanted it.

He “could have given it to any one of them. Instead, he chose me, a female and a lesbian.”

Mahoney then became a team leader on the task force in 2014, and that’s when the harassment came into full force. Members of the task force openly disrespected her so much that she eventually resigned from the leadership position, but stayed on as a member.

Some officers continued to harass her, and she said that the same ones would also “interrogate all the young male interns about their sex lives” in order to find out if they’re gay and make insulting comments about women’s bodies, including female interns.

“It was a free-for-all of abuse,” she said, and their supervisors would often laugh at the harassment.

Ledogar listened to her and tried to help. He believed her when she said that the bullying made her feel unsafe and that it was happening in the field, which could put civilians in danger.

So he reported the incident up the chain of command and tried to get an internal investigation started.

And that’s when he says he started facing retaliation.

Four separate internal investigations were started against Ledogar, which his lawyers are calling “fishing expeditions,” over the next four years. One of them accused him of making racist comments at work, and he said that complaint was lodged by one of the officers harassing Mahoney as a way to get back at him for supporting her.

One of the investigations against Ledogar resulted in his termination, less than three months before he was scheduled to retire. While he got letters of support from 166 colleagues and managers and has worked for the U.S. Marshals for over two decades, the accusations of conduct unbecoming a Supervisory Deputy U.S. Marshal, lack of candor, misuse of position, and misuse of government property-IT device stuck.

He filed an appeal with the federal Merit Systems Protection Board, saying he was wrongfully terminated. He’s trying to keep his retirement but also erase the stain on his record. He filed a complaint with the Equal Employment Opportunity Commission for retaliation as well.

“This is a classic example of retaliation for protected activities,” his lawyer said. “Not only did headquarters in Washington punish Bobby for standing up for a fellow employee who clearly was being harassed and discriminated against based on her gender and sexual orientation, but it sent a clear message to other Marshal Service employees that they could expect the same treatment if they, too, rocked the boat and took actions that could embarrass headquarters.”

“What is most difficult for me to accept personally is that his current persecution is solely based on his courageous actions of support in standing up for me, the original victim of bullying by those making retaliatory complaints against him,” Mahoney wrote in her letter of support for Ledogar.

Another investigation into her harassment complaints was started when she got help from Sen. Kirsten Gillibrand’s (D-NY) office, and it found that the previous investigation was compromised by a “conflict of interest.” Ledogar testified several times in the new investigation, which eventually led to Mahoney settling in 2019.

She lost her dream job on the task force and was transferred out for her safety. Most of the men who harassed her, on the other hand, are still there. One was fired in 2015 because he allegedly almost punched Ledogar after the two argued about his support for Mahoney.