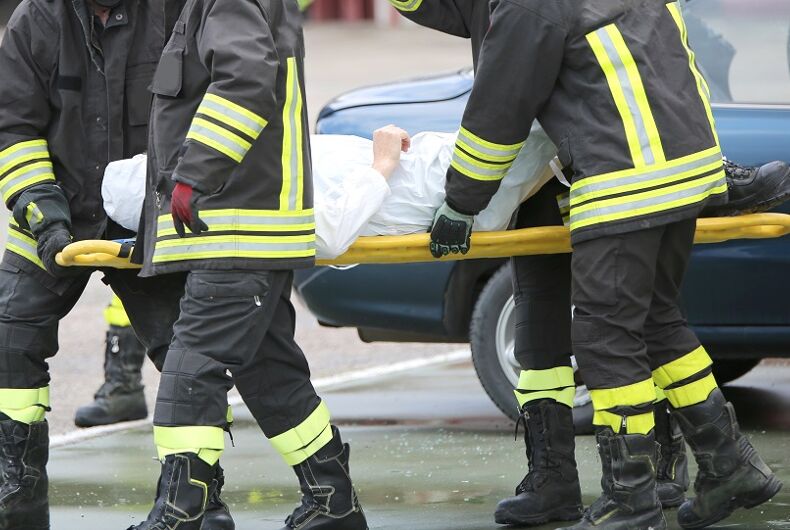 A federal appeals court sided with a lesbian firefighter who claimed that she was harassed and discriminated against for years.

The case involved Lori Franchina, who started working for the Providence Fire Department in 2002 and quickly rose to the rank of lieutenant. In 2006, she was harassed by one of her subordinates who wouldn’t stop making inappropriate comments, even when she told him multiple times to stop. He also walked in on her changing room wearing only his underwear, and refused to leave while she shouted at him.

When Franchina reported his insubordination, the other firefighters turned against her. One of them refused to cook for her at the station, and when he did, she said it would make her sick. She traded plates one day with another firefighter, and he got sick instead of her.

They started calling her names like “frangina” (rhyming with “vagina”), bitch, cunt, and lesbo. Her subordinates would make comments like “Who does that fucking bitch think she is?” when she would tell them to do something, and the fire department ignored her complaints.

And they didn’t limit themselves to verbal insults; they would leave written insults on a white board like “Frangina leads Team Lesbo to victory.”

The firefighters also refused to do their jobs when they were with her. Usually it was annoying things, like refusing to carry stretchers. The harassment sometimes put people’s lives at risk, like when a firefighter refused to put an oxygen mask on a woman because Franchina ordered him to.

Another firefighter refused to follow her order and drive a rescue vehicle with a car accident victim in it. The victim later died.

The harassment and insubordination continued for years. She was transferred to a different station and she filed complaints that were ignored.

But one incident made her leave her job. Franchina and other firefighters responded to a suicide attempt by a man who shot himself in the head. She tried to get her subordinates to help her put the man in a stretcher. They repeatedly refused, so she had to get a police officer on the scene to help her. Once in the rescue vehicle, a firefighter performed CPR. Afterwards, he looked at Franchina and took off his gloves in a way that splattered blood and brains all over her.

She reported the incident to the fire chief, who didn’t listen. But the city’s Equal Employment Opportunity Officer investigated and found “ample merit” to her claim.

She took six months leave and, when she got back, was pushed and spit. She got a restraining order against one of the more aggressive harassers, but her superiors didn’t respect it and scheduled her to work with him anyway.

Franchina got placed on “Injured On Duty” status and moved to a desk job, but the harassment continued, and she finally stopped going to work.

In 2013 she was diagnosed with “severe post traumatic stress” from the harassment, a permanent disability that prevented her from working with the fire department ever again.

She sued the city of Providence under Title VII and numerous other women who worked at the fire department testified about pervasive harassment and discrimination against them. Since Title VII bans sex discrimination, Franchina’s argument was that she was discriminated against because she was part of a sub-group of women.

In 2016, she won her trial. The city appealed, though, effectively arguing that she was discriminated against because she’s a lesbian, not because she’s a woman. They said she had to prove that gay men weren’t harassed at the department to show that her discrimination was based on sex.

Judge O. Rogerie Thompson, writing for the 1st Circuit Court of Appeals, responded, “Such a standard would permit employers to discriminate free from Title VII recourse so long as they do not employ any subclass member of the opposite gender. But, of course, that cannot be.”

“The City of Providence remains committed to maintaining a workplace that is free from harassment and discrimination,” said a spokesperson for Providence Mayor Jorge Elorza. “The City takes any complaint seriously and investigates each matter. With regard to the case at hand, the City will not be appealing the recent ruling.”

LGBTQ organizations hailed the ruling. “The ruling clarifies in the First Circuit that the existence of sexual orientation discrimination does not negate a sex discrimination claim under Title VII,” GLAD said in a statement.

Franchina has not commented on the ruling.

This Mormon gay man got famous for marrying a woman. Now they’re getting divorced.