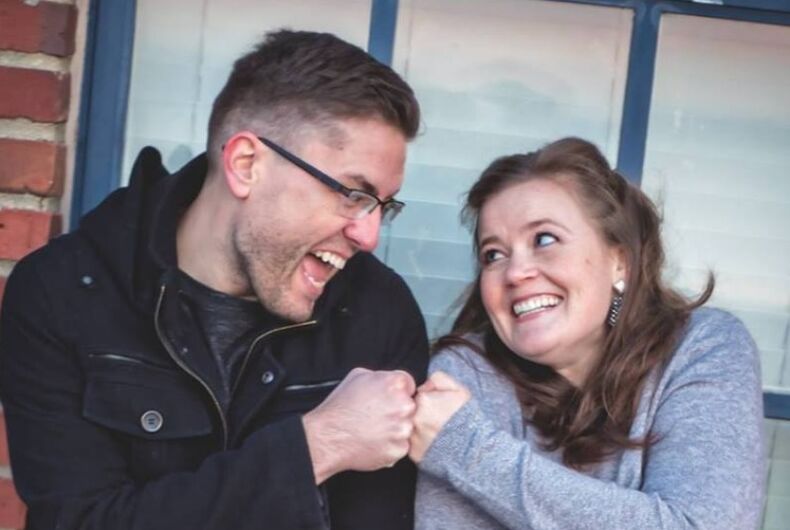 In 2012, Lolly and Josh Weed came out after ten years of marriage: he’s gay, she’s straight. They said their marriage “works very well” and that they’re “incredibly happy.”

And now they’re getting divorced.

Their original coming out blog post went viral and the Weeds were interviewed all over the world. The Mormon couple even got some fans on the right who visited their blog regularly.

They were showing that people can be gay on the inside and choose not to act on it; homophobes love that idea. They love it so much that it’s the stance of the Mormon and Catholic churches.

But they weren’t as happy with their lives as they were telling the outside world. For Josh, the idea that he would spend the rest of his life never loving anyone romantically was leading him to consider suicide. Lolly’s self-esteem was hurt by how Josh was never really attracted to her, and she worried about how their marriage would affect their four daughters.

Things started to change as Josh learned to accept his sexuality and to reject what the Mormon church taught him as he was growing up. Because they had some fame in certain circles, they started to meet other LGBTQ people.

“Could it be that my sexual orientation wasn’t a mistake?” Josh asked himself, after a straight friend told him that he didn’t just have to “tolerate” his sexuality. “That it was part of the diversity and variety that brings nuance to our planet and to humanity? And that God meant it to be that way?”

Later, a lesbian, Mormon friend told Josh that she too was thinking about suicide, and he thought about how much he dreaded living the rest of his life… things started to come together.

Lolly and Josh decided to do “the thing God was asking us to do”: separate.

They offered a lot of apologies. First to gay Mormons, who might have gotten the idea to do what they did or to stay with someone they weren’t attracted to because of their story.

They also apologized to LGBTQ people who have been hurt because their story was used to fuel homophobia.

“One person wrote — and I’ll never get the horror of this out of my head for the rest of my life — saying that he went to see his family for Thanksgiving during his second year of college, where he was an out gay man who openly had a boyfriend,” Josh wrote. “When he got home, his father pulled up our story on the computer and then physically assaulted him, beating him as he had often done during his childhood, saying ‘if this guy could avoid being a faggot, so could you!'”

Last, Josh apologized to out LGBTQ people for thinking he was better than us because he could pretend to be straight.

The couple still plans to live on the same 160-acre property, adding new partners who come into their lives, because they share “a love that was similar to the love of a brother to a sister.”

The punchline? Both Josh and Lolly are practicing marriage therapists.

A lesbian firefighter faced disgusting harassment at work. She won her lawsuit.