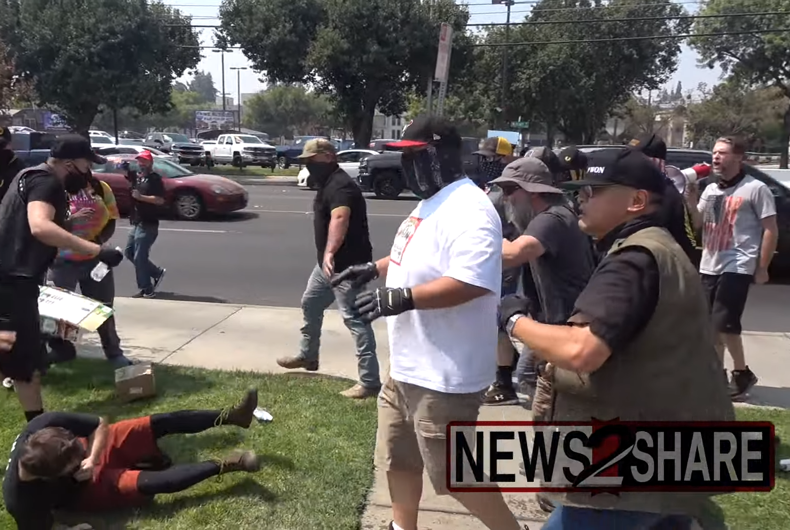 A “Straight Pride” rally hosted by the far-right hate group Proud Boys in Modesto, California ended in fistfights and the sting of bear spray over the weekend. Pro-LGBTQ activists combined with anti-fascist protestors to counter the militaristic group that rose to prominence under former president Donald Trump.

Members of the group have been arrested and charged with multiple hate crimes and several members have been charged for their roles in the insurrection at the Capitol building. Trump infamously told the group to “stand back and stand by” instead of denouncing them during the presidential campaign.

Pro-LGBTQ activists held a rally in a local park a few hours before the Proud Boys event started, but joined with anti-fascist activists to actively counterprotest the “straight pride” rally.

Reports say the militia group provoked the protestors, kicking off the brawl that closed down the street and ended in two arrests. This is the third time the group has held the event; the group uses the opportunity to hurl racist and anti-LGBTQ slurs at passersby and protestors while soaking up the local media and police attention.

The group has become the far-right’s “enforcers,” starting fights and attacking progressive activists across the nation.

Boston organizers Mark Sahady and Suzanne Ianni of Massachusetts were arrested by the FBI earlier this year in connection to the MAGA riot at the Capitol after they were outed by the group behind Straight Pride.

The FBI found out about the pair through social media posts from the organization “Super Happy Fun America,” which organized Straight Pride in Boston in 2019 and whose motto is “It’s Great to be Straight.” Sahady is the group’s vice president.