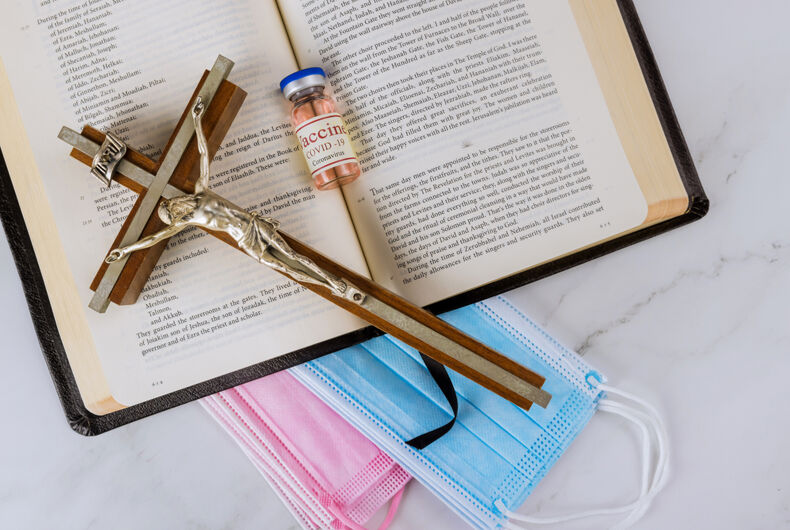 A pastor in New York City is attracting people to his church with the promise of religious exemption letters to COVID-19 vaccine mandates, spurring a chicken-and-egg debate on religious exemptions: which comes first, the desire to break a law or the “sincerely held religious belief” used to justify that desire?

Rev. Kevin McCall of Anointed by God Ministry said that 60% of his congregation has requested letters to exempt them from vaccine mandates and the New York Daily News says people are joining his church “in droves” to get a letter.

McCall says he has written up 90 such letters and has requests from 170 more people, mostly city workers as New York City has been increasing vaccine requirements for employees.

But McCall, who said he is not vaccinated, denies the allegation that he’s writing these letters for just anybody, even as he plans events throughout the city to get people to join his church and get an exemption letter.

“Anything that you put in your body that we deem unclean — whether it’s vaccines, bad food, liquor or drugs — those are unclean things,” he said, although he didn’t mention any other times this belief was important to the church’s faith before the COVID-19 vaccines started being mandated. “It has to be part of your belief. You join our membership. We’re not just giving them out willy-nilly.”

Mayor Bill de Blasio’s (D) office said that the letters won’t actually provide an exemption to vaccine requirements. Public school employees will be required to get their first shot of a vaccine by September 27, and the requirement doesn’t allow for religious exemptions.

McCall’s letter-writing “has no functionality and is nothing more than a publicity stunt to increase his memberships,” said a spokesperson for the mayor. “Vaccines save lives and misinformation causes more deaths. We don’t need more people dying. That’s not right.”

Employees who refuse to get vaccinated will be placed on unpaid leave, with or without a letter.

Throughout the pandemic, opponents of safety measures like vaccines and masks have demanded religious exemptions, even if they couldn’t articulate how their beliefs are violated by following safety rules.

People who refuse to hire, house, or serve LGBTQ people often claim that their religious beliefs require them to discriminate. Religious exemptions have become a key battleground in LGBTQ law and policy, with the right often treating religious beliefs as inviolable, no matter the consequences for LGBTQ people.

Years of using religious exemptions as a “get out of jail free card” in this context may have led people – like some in Rev. McCall’s congregation – to mistakenly believe that the government can never force anyone to do anything if they say it’s against their religious beliefs.