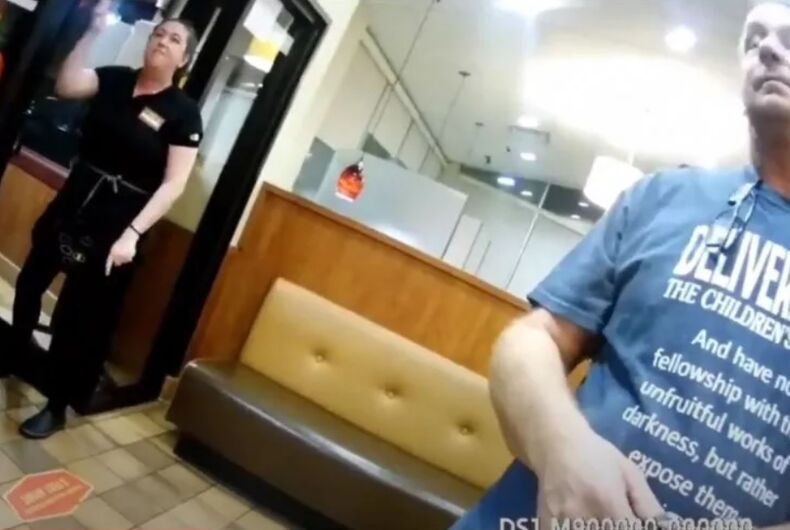 The employee has just had enough, while the customer argues that he can't wear a mask because of Jesus.Photo: Screenshot/YouTube

An employee at a Denny’s quit her job after two men claimed that, as Christians, they have a religious exemption to the state’s mask mandate.

“Roger, I’m not working for this shit anymore,” the server said in the video being shared on social media. “These guys won’t put their masks on, I’m sick of feeling like this.”

The video shows a frustrated worker at a Franklin Park, Illinois Denny’s location telling two customers to put on masks, but they refuse.

“We have a religious exemption,” says the man recording the video at the beginning. “We just don’t want to wear a mask.”

The other customer says he has a “religious belief, though,” and that’s when the server is just done. She walks over to a table to put down the menus she was holding while one of the men cites the Civil Rights Act of 1964.

“You know what? I quit. I fucking quit,” the server says. “What is wrong with you people?”

She’s at the door when she yells at her manager off-camera: “I’m not working for this shit anymore. These guys won’t put their masks on, I’m sick of feeling like this.”

“Why are you discriminating against us, ma’am?” one of the customers asks with a tone of smarmy self-satisfaction.

“I can’t do this anymore,” the server tells her manager. The manager then comes out to tell the customers, “The governor said, ‘No mask, no service.'” He explains that there is no religious exemption to mask-wearing, “No, not here.”

“OK, then you have lost our business.”

In a statement, Denny’s said that it is “aware of the situation” and that “the safety of our employees and guests is our top priority and we will always abide by all applicable regulations and guidelines to ensure that priority is met.”

In a move all-too familiar to LGBTQ people, the men in the video claimed that they have a religious exemption to following the law, a religious exemption that does not exist. The Civil Rights Act of 1964 “does not guarantee your entry into any particular business establishment,” according to the National Law Review, it just bans discrimination based on a number of categories, one of which is religion.

That is, a restaurant can’t put up a “No Christians allowed” sign, but they can require people of all religions to follow the same rules. Whether an individual, seemingly neutral rule is a form of illegal discrimination depends, in part, on the burden it places on a certain religion and whether a reasonable accommodation can be made for it.

Here, the burden is wearing a mask – something that Christianity doesn’t even object to! – and the accommodation would be to allow Christians to spread whatever diseases they want. It’s unlikely a federal court would side with the customers, which is why they were reduced to telling the Denny’s that they lost their business.

Mike Pompeo threw a Christmas party for State Department staff. No one showed up.