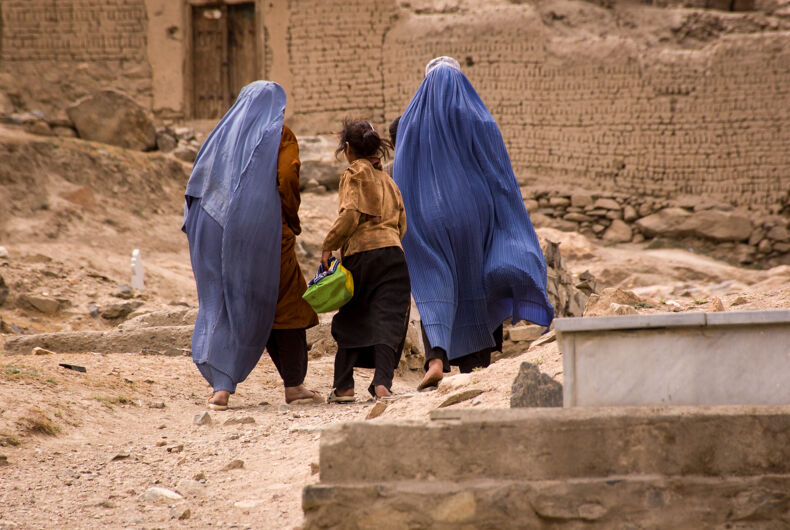 Two women and a girl walk through a graveyard in Kabul, AfghanistanPhoto: Shutterstock

A British charity that brings cats, dogs, and donkeys out of Afghanistan to England caused an uproar as British troops facilitated the founder’s mission to spirit almost 200 pets out of the war-torn country.

While LGBTQ people, women, and Afghans who worked with Western forces desperately try to flee the Taliban, Pen Farthington, a former British Royal Marine, flew home in a chartered Airbus without even his staff on board. Instead, the cargo hold was stuffed with dogs and cats.

Farthington’s misplaced priorities spawned days of controversy as some social media users and celebrities rallied to his cause to save as many animals as possible. He founded an animal shelter, Nowzad, after serving in the country.

When the orders came to evacuate, Farthington’s staff were given visas, but he refused to leave without the animals. Instead, he started a social media campaign dubbed “Operation Ark” to pressure the British government to help get him – and the animals – out of the country.

When Defense Secretary Ben Wallace stressed that the government was prioritizing people over pets, Farthington left a threatening voice mail berating officials, promising retribution by destroying a special advisor to the secretary’s reputation in media interviews and online.

“I regret that, but I don’t believe that the Taliban’s main point of target will be his workforce and indeed the pets and the animals he is looking after compared to some of those other people desperate in front of the queue,” Wallace told reporters. “Frankly I have to prioritize people at the moment over pets.”

Eventually, after an outcry online and alleged pressure from Prime Minister Boris Johnson’s wife, the military gave a slot to a chartered plane to bring Farthington and his menagerie out.

Farthington, his staff, and the animals reportedly arrived at the airport only to be turned away at the last minute – shortly before two suicide bombers attacked outside the checkpoints to the facility. When they returned, the Taliban reportedly refused to allow the staff to join him despite the visas that allowed them to leave.

Twenty-four staff members and their families were left behind as Farthington loaded the animals into the cargo hold and took off with empty seats.

The Taliban has already promised to institute Shariah law again, forcing LGBTQ people and women into hiding. Thousands of desperate Afghans have tried to flee as allied forces leave the country, abandoning the vast bulk of refugees and future victims.

Gay men are already being killed and dismembered in multiple cities.

In several Sunday newspapers, a source that has heard it confirms the words: pic.twitter.com/TCAT5VkcAi

Bullied trans teen found “crying, scared to death” but school says it was his fault