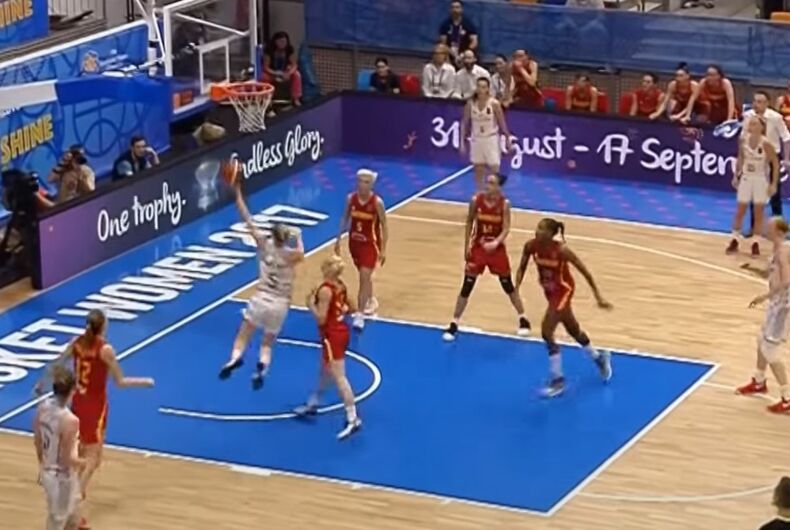 A sportscaster has been temporarily suspended after making sexist and transphobic comments about his own country’s women’s basketball team on the air.

Now he’s saying he was caught up in “the euphoria after the honoring of the returning medalists” when he called the women gay and men as insults.

Eddy Demarez is a sports announcer for Sporza on VRT in Belgium and he was commenting during a live broadcast of a tribute to his country’s returning Olympic athletes. He said he didn’t know that he was still on the air when he started making comments about the women’s basketball team, the Belgian Cats.

“That’s a man,” he said about guard Marjorie Carpreaux, according to SB Nation.

Demarez referred to power forward Emma Meesseman as “Emma Meeste-man” – a play on words that changes her last name to “mostly man.”

When he saw Kim and Hanne Mestdagh – sisters who are both on the team – he said, “The Mestdaghs: One’s a lesbian, the other not.” He was referring to Kim, who is out.

Demarez also claimed that “there’s only one straight player on this team,” even though only two are out.

VRT has already distanced itself from him, saying that his words were “inappropriate” and that he has been suspended. They said that they are examining “whether and how Demarez can resume work.”

The station said that a video channel remained open and Demarez didn’t know he was on the air.

“In the euphoria after the honoring of the returning medalists, I made statements during a private conversation far from the studio where I seriously crossed the line,” Demarez said in a statement. “I never had the intention to offend anyone due to their sex or sexual orientation. I am sincerely sorry to the Belgian Cats and their team as well as anyone who felt offended. I have already given a personal apology to the players. I will learn the necessary lessons and be vigilant that this never happens again in the future.”