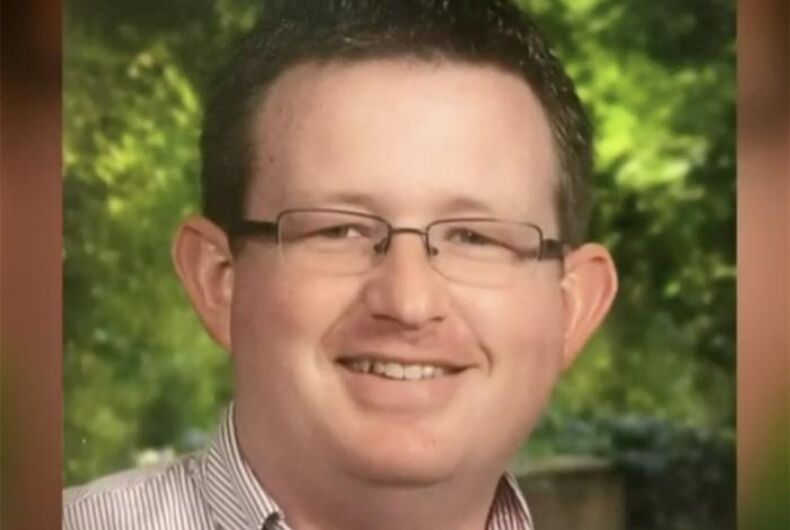 The family of a Texas schoolteacher arrested by authorities and charged with online solicitation of a minor has sued, saying that police targeted the gay man for no reason and hid evidence that would have proven him innocent.

Brian Petersen died by suicide days after he was released from jail following his arrest. But the note he left behind has raised a lot of questions that the police can’t answer.

Related: Halo video game announcer was asked to say “Trans rights.” He went well beyond that.

“I am deeply angry at law enforcement as they destroyed me and gave me no other solutions,” Petersen wrote. “This is the type of accusation that destroys a career and a life, no matter the outcome. I cannot live the rest of my life getting a doubting eye every time I talk to a kid near me. I will not spend the rest of my life barely surviving after losing everything. So, I choose oblivion.”

Petersen claims that he wasn’t trying to meet a minor for sex. He knew he was meeting an adult man, he said; he just didn’t expect to be arrested.

Before he would agree to meet, Petersen requested that Dunn send him a voice memo over the Grindr app. Conroe police detective Darrick Dunn complied and sent it, but police say they cannot provide a copy of the message because they’ve lost it.

Petersen thought he was doing roleplay with another man after hearing his voice, he said, and addressed Dunn directly in his note.

“Having a lot of experience with teens, these mannerisms, amongst many others, made it glaringly obviously clear that you were an adult,” he wrote. “I wasn’t going to meet a teen.”

The family’s attorney alleges that Petersen was only told that his chat partner was “under 18.” The age of consent in Texas is 17.

It “was almost adorable how funny the message was as you pretended to be a 14-year-old,” Petersen wrote to Dunn. “You were, to me, a guy my age role-playing as a younger guy.”

Petersen’s parents are suing for false arrest and malicious prosecution.

Sting operations have targeted gay men for decades, trying to entice men into agreeing to have sex with undercover officers and have also frequently been faked. Stings targeting public bathrooms, for example, have been dubbed “bag a fag” operations by police.

But police targeted Petersen specifically, the attorney says, and his family wants to know why since his only offense was being a gay teacher.

“Had people complained? Had parents complained?” Kelly Strader, a law professor who has studied sting operations told the Daily Beast. “What was the basis for this? Or was it simply the police saying, ‘OK, let’s go out and grab some gay guys?’”

“Evidence. A tip. Something,” he said. “From what I’ve read about this case, there was nothing like that. To me, that’s what is heartbreaking.”