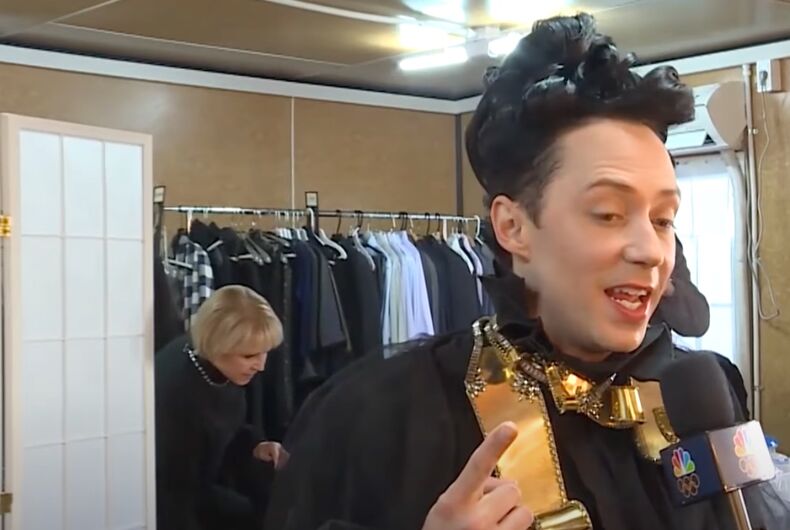 Olympic figure skater Johnny Weir responded to a fragile former top Trump official with class after she insulted him for not dressing masculine enough.

Jenna Ellis was a legal advisor to Donald Trump’s 2020 campaign and has a long history of anti-LGBTQ activism. And Trump losing the 2020 election hasn’t stopped her from focusing on what’s important: gay people brazenly appearing on her TV.

“#WokeOlympics closing ceremony clown,” she tweeted with a picture of Weir, who was announcing for NBC. His hair was done by TV stylist Mariola Zysk and he was wearing a partly transparent asymmetrical jacket by Ukrainian designer Ivan Frolov. Ellis made it clear that she called him a “clown” because his look wasn’t butch enough for her deeply held religious beliefs.

“Bring back the days when boys cared about growing up to be actual men,” she wrote. “Biblical masculinity over woke fragility.”

Bring back the days when boys cared about growing up to be actual men. Biblical masculinity over woke fragility. https://t.co/HTNwvLNPJl

“The man I’ve grown into is a human that embraces the strength of the man & woman who raised me to be myself,” Weir responded. “If you feel squashed by the boot of someone else’s beliefs, remember you are free to live your life the way YOU believe.”

“Also, religion isn’t an excuse for hate,” he concluded, responding directly to Ellis’s demand that Weir follow her interpretation of “Biblical masculinity.”

Ellis is an outspoken supporter of squashing others with her religious beliefs, including supporting conversion therapy and calling for an end to the separation of church and state. So she conceded that Weir was right about her… she just said that “genuine love” was motivating her to call Weir a pervert for wearing clothes she doesn’t like.

“Far from being hate, it’s actually genuine love to speak truth, not relativism and embracing every form of casual perversion under the banner of ‘being myself,'” she responded, citing Ephesians 4:17-22, which doesn’t say anything about designer jackets or clothes more generally.

“Eventually, Johnny, you’ll have to answer to God for your choices & beliefs. Choose truth & Jesus.”