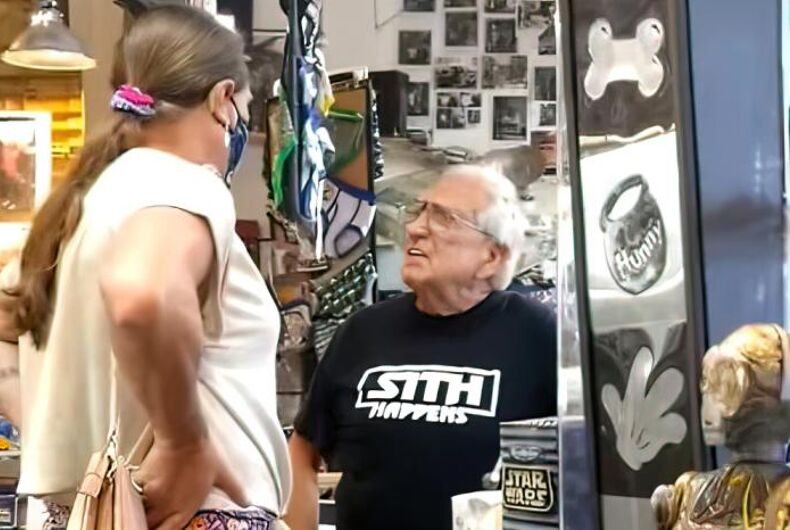 When Aberdeen, Washington City Councilor Tiesa Meskis heard about a sign posted by Don Sucher, owner of Sucher & Sons Star Wars Shop, inside his store, she went to see for herself.

The ugly handwritten sign sparked a war of words between the two that ended with Sucher following Meskis into the street to hurl abuse and declare himself a patriot for insulting women.

Right wing media ran stories earlier this year claiming the children’s author Dr. Suess was being canceled after his estate announced they would stop selling a handful of his older books that included racial slurs. Sucher’s sign references the fake controversy by proclaiming he sells the author’s “new book.”

Sucher titled the imaginary tome, “If you are Born with a Dick, you are Not a Chick.”

Meskis entered the store to tell Sucher that “what he wrote there was so demeaning and so dismissive of who I am, who any trans woman is,” she told the local NBC station.

“There is a store downtown that I used to think was pretty cool, even though the owner had some wild beliefs,” Meskis posted on Facebook with photos and videos from her encounter. “But, today I learned that he put up a sign that was a direct attack on me personally as well as every trans member of our community.”

“So, I went down to just see if this was real and if so I was going to grab a picture and leave. The business owner had other plans which are in the videos.”

The confrontation inside the store turned ugly and Meskis posted videos of the argument online with photos of the sign. She calls the owner a “bigot” as he insults her and other transgender people.

When Sucher ordered her to leave his shop, Meskis complied but he followed her outside to continue berating and insulting her.

“Trans women are women!” she yelled at him.

“You’re nuts,” he replied. He also repeatedly asked Meskis about her genitals.

“You don’t get to ask that,” Meskis told Sucher. “You are a fucking idiot.”

Sucher admitted that his only motivation is to antagonize a minority group.

“I want to be in your fucking face because nobody confronts your stupid ass,” he said.

“I don’t care what they do, but don’t come in here and complain to me about stuff. I have free speech,” Sucher told the station before proudly saying he doesn’t care about completely rejecting the entire point of the movies his store is wrapped around.

The bad guys belong to the dark side in Star Wars and Sucher says he’s not interested in equality and justice for everyone. He’s a loyal stormtrooper.

“I don’t give a fuck about feelings anymore,” Sucher said. “I went to Vietnam to fight for all this shit. Do you think I care about some fucking feelings? Absolutely not!”