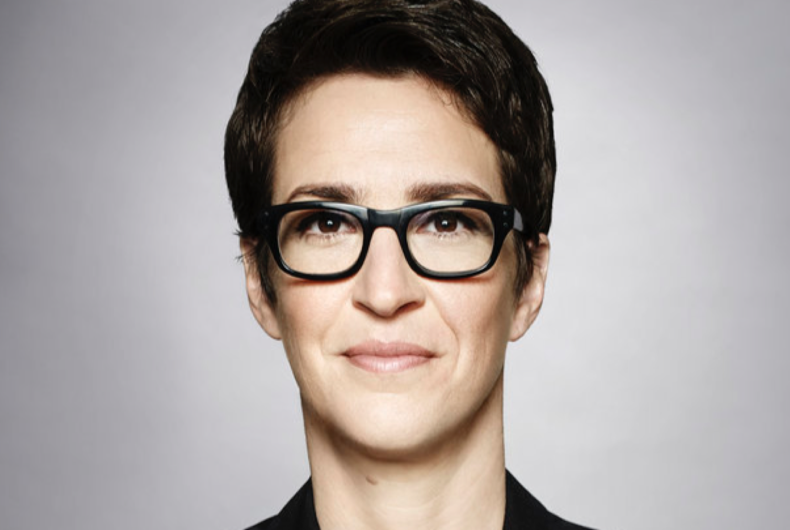 Out MSNBC host Rachel Maddow has reportedly agreed to a new contract, meaning she will remain with the cable network after widespread speculation that she was considering an exit from her on-air home of 13 years.

Just over a week ago, executives were scrambling to figure out how to retain Maddow, while negotiations with her newly hired agents got “heated” that many believed the veteran journalist could jet. Now, they reportedly came to terms on a “multiyear” deal that keeps Maddow at MSNBC through into 2023, when she will turn 50.

Insider first reported the agreement and Variety, the Daily Beast and several other outlets report that sources confirmed the news to them, although the network declined to comment further and no official announcement has been made.

Sources said that Maddow’s contract will allow her to pursue new projects with NBCUniversal, the parent company of MSNBC, in addition to hosting her daily weekday show. “This uniquely positions Rachel and MSNBC to capitalize on the evolving and fast growing media landscape for years to come,” one told the Daily Beast.

The Rachel Maddow Show is currently, and has consistently remained, the top show in the 9:00 pm EST primetime slot among MSNBC’s cable competitors, including Cuomo Prime Time at CNN and Hannity at Fox News.

The show is also huge for MSNBC’s bottom line. In 2020, even after the pandemic ravaged advertising, advertising slots for Maddow still bought in over $66 million on its own.

Maddow has hosted her eponymous show since 2008. Her draw has always been her in-depth nuanced reporting as versus the competition’s tendency to rely on guests and talking heads to discuss current events.

But Maddow has also stretched herself thin, undertaking multiple books, podcasts and special coverage events, among other projects. She’s previously expressed desire to spend more time with her wife. The two women live in Massachusetts and Maddow commutes to work every day in New York City.

The Daily Beast reported that if she were to leave, it isn’t likely that Maddow would jump to another network. Instead, she’d expand her reach into online media, specials, and podcasts.

Earlier this year, MSNBC inked an extraordinary deal with out correspondent and election season sensation Steve Kornacki that anchors him with the company through 2025, paying him in the “multi-million dollar” range.

The new deal firmly put Kornacki on the NBCUniversal team for each election night from now until the 2024 presidential election. The company also agreed to extend Kornacki’s coverage duties outside of political events, allowing him to take part in NBC Sports coverage of the Olympics and horse racing, among others.

Conservatives are turning school boards into a battleground for culture wars