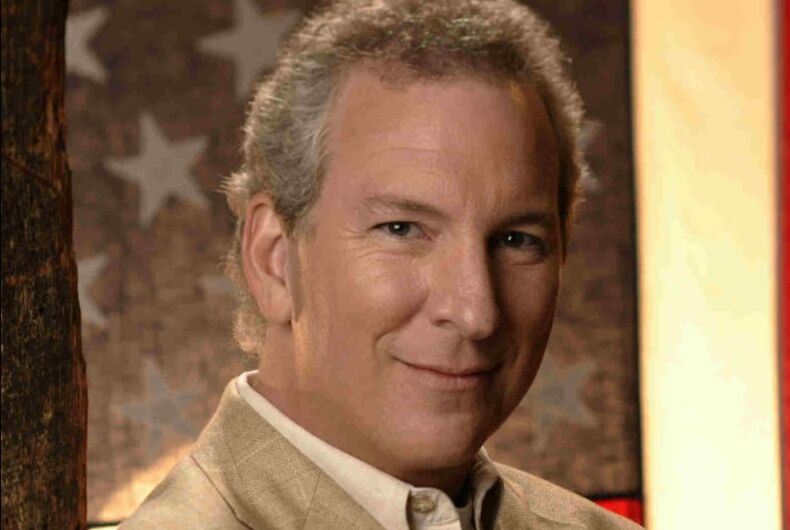 An anti-LGBTQ radio host who refused to get vaccinated against COVID-19 has passed away due to complications from the virus.

“One of the greatest talk show hosts this town and probably this country’s ever known, Phil Valentine, passed away today,” a representative of SuperTalk 99.7 WTN in Nashville said in an on-air statement this past Saturday.

Last month, Phil Valentine’s family announced that he had been hospitalized with COVID-19 after he had spent months on the radio telling his listeners that he would not be getting vaccinated because he believed he had “a very low risk of A) getting COVID, and B) dying of it if I do. Why would I risk getting a heart attack or paralysis by getting the vaccine?”

“Phil contracted the Covid virus a little over a week ago & has since been hospitalized & is in very serious condition, suffering from Covid Pneumonia and the attendant side effects,” his brother Mark Valentine said in a statement at the time.

Tennessee has seen a rapid increase in hospitalizations since the beginning of July and last week the Tennessee Hospital Association said that intensive care units (ICUs) are full at hospitals in most metro areas in the state because of the latest surge in COVID-19.

“This means that if you or a loved one need treatment for any type of serious healthcare, problem like a severe injury, heart attack, or stroke, you may not be able to access the care you need, when you need it,” said the association’s president Dr. Wendy Long.

The exact number of days that Phil Valentine spent in the hospital is not yet known. He first announced he caught the virus in a July 12 social media post, weeks after he mocked vaccine efforts with a parody song called “Vaxman” on his show. His brother announced his hospitalization by July 23, and news of his death was made public on August 21.

In a later interview, Mark Valentine said that his brother “recognizes now that him not getting the vaccination has probably caused a bunch of other people not to get vaccinated.”

“This is a real threat, it is a real public health crisis and it is something that if he had to do over again… his cavalier attitude wouldn’t have been what it was and he would have gotten vaccinated and encouraged everybody to get vaccinated,” he said.

Tennessee House Speaker Cameron Sexton (R) – who this month has been calling for a special session of the state legislature in order to prevent schools from implementing mask mandates – tweeted that Phil Valentine “made a difference in life as a strong conservative voice.”

“He will be greatly missed by all! Our heartfelt prayers & deepest sympathies go out to the Valentine family & Phil’s radio family,” Sexton wrote. Just days earlier, Sexton was tweeting that Gov. Bill Lee’s executive order allowing parents opt their children out of school mask mandates as “good news in affirming a parent’s right to make healthcare decisions for their children.”

Valentine also had a history of anti-LGBTQ statements and opposed LGBTQ rights. During a radio show episode on marriage equality, he repeatedly compared being gay to incest.

“The problem is the slippery slope, of course,” Valentine said. “And when I say this to folks, they say, ‘Oh! That’s ridiculous!’ But how can anybody that supports gay marriage sit there and say that they’d be against a father marrying his daughter if it’s a consensual relationship?”

“It’s not ridiculous, it’s the same thing you’re saying,” he stressed in the radio debate. He went back to the incest comparison several times throughout the show.

Valentine also wrote a bizarre courtroom novel where he imagines a future where a doctor finds out how to turn gay fetuses straight and the fictitious organization “GALLANT (Gay And Lesbian Liberation And National Tolerance)” sues to stop the scientist from de-gaying a baby. A Christian organization led by “Lucius Gaylord” helps the gay group because Christians hate genetic research more than they hate LGBTQ people in his book.

The book is called The God Players, because it’s about people playing God.

“There is no more controversial subject than homosexuality,” the book’s description on Amazon says. “The primary argument has been over nature vs. nurture. Are homosexuals born that way?”

“The God Players will challenge everything you’ve ever believed… no matter which side you’re on,” the back cover promises.

Gov. Lee, who signed several anti-LGBTQ laws this year, also offered his prayers for Phil Valentine’s family as he continues to clamp down on local governments trying to fight the virus.

“Maria and I are deeply saddened by the loss of Phil Valentine and pray for his family as they navigate the difficult days ahead,” he tweeted.

.@ValentineShow made a difference in life as a strong conservative voice & leading the fight to stop the state income tax two decades ago. He will be greatly missed by all! Our heartfelt prayers & deepest sympathies go out to the Valentine family & Phil’s radio family @997wtn. https://t.co/xPVtRh2wRa

@GovBillLee’s executive order issued today is good news in affirming a parent’s right to make healthcare decisions for their children.