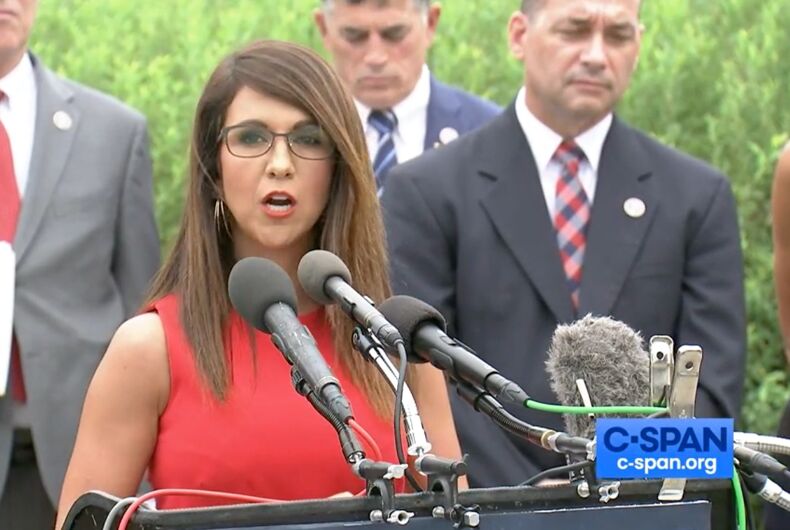 Rep. Lauren Boebert (R-CO) cannot help herself. She opens her mouth and words fall out that are best kept inside.

This time, at a Freedom Caucus press conference, the congress member decided to call for the impeachment of Vice President Kamala Harris for a reason so ridiculously stupid even her fellow legislators could barely keep a straight face.

Related: Oldest ball python in captivity lays eggs despite not being near a male in decades

President Joe Biden’s handling of the pull out of American troops from Afghanistan so badly, she says, Harris should be impeached for not invoking the 25th amendment to the Constitution. The move would require a vote of cabinet members and the Vice President to remove Biden from office for mental deficiency or disability.

While the move was reportedly considered during the Trump administration as the former president careened wildly from scandal to scandal while spewing obvious lies and threatening his perceived enemies, Vice President Mike Pence opposed the move despite lobbying by cabinet members.

“The blame starts at the top,” Boebert said during the performance for reporters, “with Biden and his handpicked vice president who bragged that she was right there making the same bad decisions. And if not for her own dereliction of duty, she should be impeached for not demanding we invoke the 25th Amendment.”

Boebert strangely stressed “handpicked” as if total strangers are randomly tossed together to form presidential tickets.

“Impeach Biden, impeach Kamala Harris, and throw in the secretary of state if you can get him back from vacation,” she added. None of the three have broken any laws.

She went on to decry the military for becoming too liberal and concerned with the troops’ health and well-being, declaring, “Woke doesn’t work! Cutting and running doesn’t work! Being asleep or senile or sucking on applesauce obviously doesn’t work!”

While Boebert is full of fire and fury, earlier this month she praised the Taliban for “building back better” in an attempt to mock Biden that failed miserably.

Nominations for LGBTQ Nation Hometown Hero close tonight. Who inspired you this year?