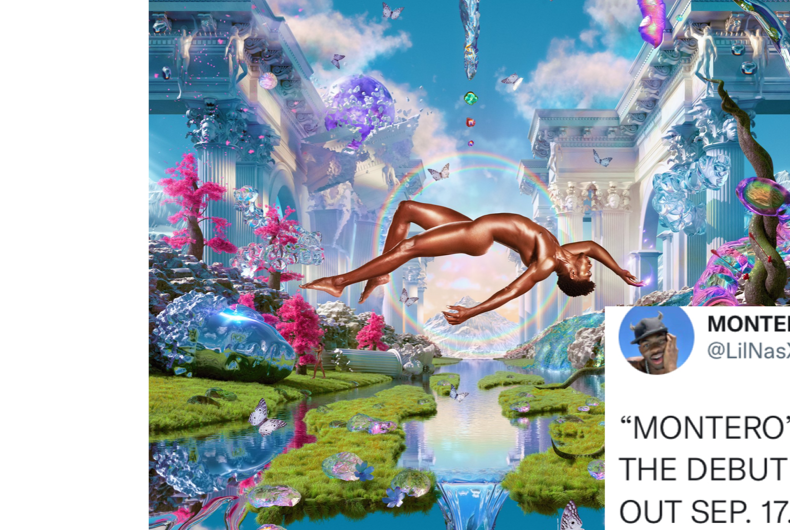 Lil Nas X works hard. Whether he’s working hard on his music, his partnerships with brands, or maintaining his jokester persona, depends on the day.

After he spent the weekend reigniting uproar over a past controversy of his, the out rapper then trolled everyone with a light-hearted video about it with legendary skater Tony Hawk. Then he released a mock album cover based on rapper Drake’s upcoming album’s cover, before he released the actual cover art today.

The first of Nas’s social media escapades began last week, when news that the Liquid Death beverage brand announced it was releasing a limited edition $500 skateboard with the blood of Hawk infused into the paint on it.

Many users pointed out how this release was received with much more fanfare and almost no controversy around the inclusion of Hawk’s blood, which was a stark contrast from the controversy that arose from Lil Nas X’s so-called “Satan Shoes,” which were unofficially altered Nike shoes that also included a drop of blood in them and were available for limited sale in promotion of “Montero (Call Me By Your Name).”

“Now that tony hawk has released skateboards with his blood painted on them, and there was no public outrage, are y’all ready to admit y’all were never actually upset over the blood in the shoes? and maybe u were mad for some other reason?” Nas tweeted on August 25.

Many presumed Nas’s issue with the double standard was directed at Hawk from the tweet, but that likely wasn’t the case. Not only do the two not appear to have any issues, but they got together to record a video where Nas shows off his “skating.”

Instead, Hawk is the one taking the trip down the ramp.

After engulfing social media with that reveal, Nas took time to jab at one of his fellow rappers.

After keeping mum on details, star rapper Drake revealed over the weekend that his next album, Certified Lover Boy, is coming out September 17. The album cover was revealed to be three rows with four emojis each, depicting a pregnant woman, each in different skin tone, hair colors, and outfits.

Naturally, Nas took the opportunity to use Drake’s cover for some artistic inspiration for his own supposed album cover. The finished result was three rows of four emojis depicting pregnant men.

Just as naturally, the cover “reveal” went viral and became a sensation online.

After days and days of trolling, Nas finally released the actual album cover for MONTERO today.

It features Nas floating in the air like a butterfly, naked, in front of Greek classical architecture, various plants, and a mystical body of water, juxtaposed with grass below and clouds above. He tweeted that the art is supposed to represent “a continuous loop” and the “circle of life.”

the album art is a continuous loop, to represent the circle of life. pic.twitter.com/YIqbCJ17s0

“Thus the heavens and the earth were completed in all their vast array. By the seventh day God had finished the work he had been doing; so on the seventh day he rested from all his work” pic.twitter.com/0Ba9SJ6m2a

In every instance, the “Industry Baby” rapper’s posts garnered the attention of hundreds of thousands of social media users, proving that he is one of music’s biggest attractions.

very important to know putting maximum effort into 1 song at a time takes much more “work” than dropping a bunch of songs every 3 months. just because you don’t see the work i’ve done doesn’t mean i haven’t done work. https://t.co/hOtFSurlvV

Regardless, Nas promised the tracklist for MONTERO on September 1, just over two weeks before the album comes out.

Cemetery to fans of Divine: “Please be respectful” of others