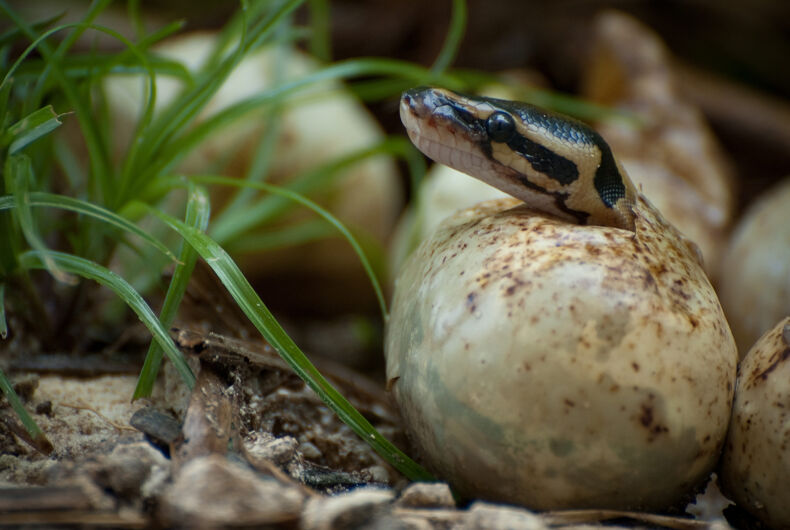 Snake #361003 at the Saint Louis Zoo has laid a clutch of eggs despite not being near a male snake in decades.

The ball python, at least 62-years-old, surely deserves a name after pulling off the remarkable feat.

The snake has been at the zoo since 1961 and hasn’t even seen a male snake in more than 15 years.

“We’re saying 15 plus years, but I mean, it’s probably easily closer to 30 years since she’s been physically with a male,” Mark Wanner, the Zoological Manager of Herpetology told CNN.

Male and female snakes were mixed in the 80s and 90s when they were placed in buckets to clean their cages. That was the last time she could have physically been with a male python.

Ball pythons are able to store sperm for later fertilization, but the longest documented case involved eggs produced seven years after contact. The snakes are also able to reproduce asexually.

The snake also laid a clutch of eggs in 2009, but none hatched. Of the seven eggs produced this time, three are still viable and are being incubated.

Genetic testing will show whether or not the eggs were produced asexually or with stored semen. The results should come back in about a month – around the same time the other eggs will hatch if they survive.

“If they continue to live and continue to develop, we expect hatching to be in the next two to three weeks,” Wanner said. “We’ve got our fingers crossed that one of these animals will hatch, but we don’t know for sure.”