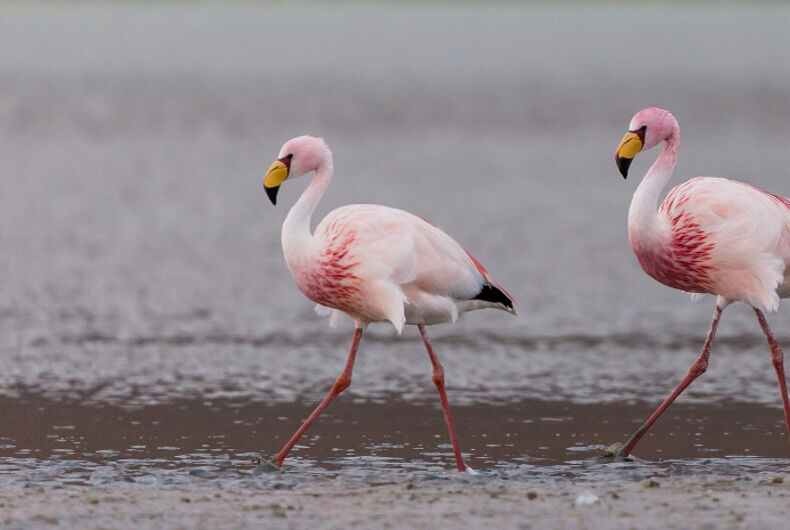 Lance Bass and Freddie Mercury are an item. Which might sound really strange, but not when you learn that the two are flamingos at the Denver Zoo and not actual people.

“Did you know that Denver Zoo is home to a same sex flamingo couple? Chilean flamingo Lance Bass and American flamingo Freddie Mercury have paired up for several years,” the zoo posted on Facebook for Pride month.

“While these two males won’t be able to have a chick of their own, they are able to act as surrogate parents if a breeding pair is unable to raise their chick for any reason.”

Not only are the couple binational, they’re also into Daddy scenarios. Freddie is almost 50 years old, but Lance was hatched in 2001. So, hey. It’s legal. Who are we to judge?

Related: No one knows how these lesbian penguins laid an egg

Same-sex pairing are common in the animal kingdom, despite the religious right claims that homosexuality is “not natural.”

This year alone, LGBTQ Nation has reported on a bald eagle thrupple raising chicks together as a family, two male penguins who had a lavish wedding ceremony, and an aquarium where most of the penguin couples are same-sex pairs.

Did you know that Denver Zoo is home to a same sex flamingo couple? Chilean flamingo Lance Bass and American flamingo…

This cop called for America to slaughter all ‘sodomite reprobates.’ They’re letting him ‘retire.’