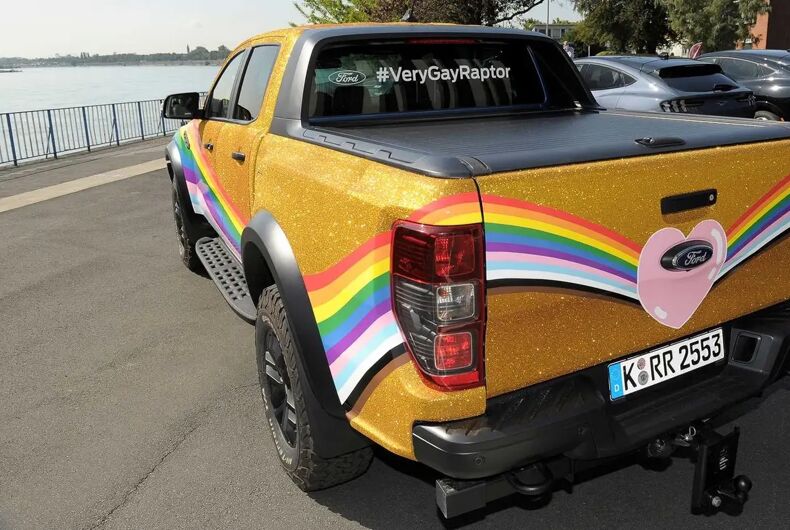 Ford's "Very Gay Raptor" is making a splash ahead of the Christopher Street Day celebrationPhoto: Ford

A Ford distributor in Germany has made a splash with a loud clapback to customers who denigrated the color of the car company’s F-150 Raptor pickup trucks.

The truck is adorned with rainbows and a big heart and covered in a sparkly gold wrap.

Ford clapped back by showing what a really gay car would look like and showed an animation of the car being painted gold and rainbow colors and wished viewers a happy Pride. The video was released to chastise people who used the word “gay” as an insult.

But then Ford actually produced a rainbow truck like in the video. The company also wrapped a 1998 Ford KA in rainbow colors to commemorate the first year they participated in the LGBTQ Pride parade.

Both vehicles were used in the Christopher Street Day parade in Cologne.

Social media lit up with folks tweeting when they saw the truck out and about around town for days before the festival.

So a while back we were introduced to a fantastic video of the #VeryGayRaptor by @FordEu – well they've only gone and made us a real one! Currently in Cologne for Pride #LGBTQ #ally https://t.co/Mu2IPDTWQG pic.twitter.com/kBGdOCXlMP

Happy CSD all around the world ! #VeryGayRaptor #pride #LGBTQ pic.twitter.com/CRO1fZ11tz

Can we talk about the #verygayraptor and #verygayka? #Ford wrapped them for the Cologne Germany pride parade.

That Ka is like the smallest el camino ever. pic.twitter.com/yp04PDW9VP