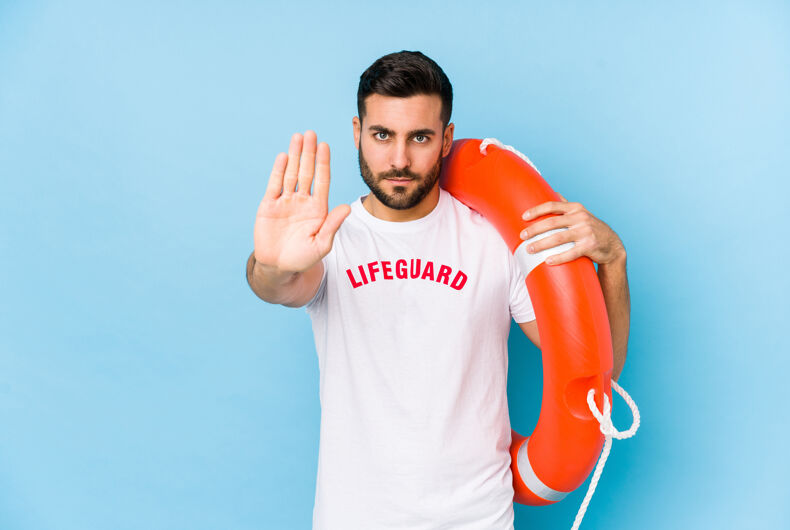 A transgender man has filed a complaint with the New York City Human Rights Commission after he was initially denied entry into a pool at an Equinox gym due to the fact that he wasn’t wearing “a female one-piece” when he tried to swim.

Equinox said it is taking the matter “very seriously,” but the man is now “an emotional mess” following the incident, and no discipline has been announced.

Gabi Young said the incident took place at the Lexington Avenue and East 63rd Street location of the large fitness chain on August 20. Young, who uses he and they pronouns, became a member of the club specifically to use the pool for therapeutic purposes.

Wearing a blue swim shirt and blue swim shorts, Young was just a few steps from the pool when a female lifeguard confronted him. She asked Young, “Excuse me, can I help you?”

The lifeguard allegedly told Young, “You need a bathing suit to go into the pool,” adding in further comments, a “One piece. A female one piece.”

Young objected to the lifeguard’s suggestion that his attire wasn’t appropriate, and eventually, the lifeguard allowed him to use the pool — but after being “judged” in front of his fellow Equinox members, Young no longer feels comfortable at the gym.

“I was embarrassed that she came up to me in front of everyone, actually in front of the people that I did the yoga classes with,” Young told Gay City News. “I’m being policed for what I’m wearing like I’m supposed to fit into a ‘female’ box just because I have breasts. No, they’re men and non-binary people with breasts. Why should I fit into a box?”

Young told managers at the location, who said they would discuss the issue privately with the employee but have not responded to further inquiries from Young.

Meanwhile, Young is “an emotional mess.” He tried to return the next day, but “I was having panic attacks just to return to that location,” he admitted.

“I never thought of it before, but now I’m thinking, ‘am I being judged on how I’m dressed going through the door?’”

Young has chosen not to return to the pool since then, despite the fact they love the community and classes.

“That’s why a lot of trans people don’t want to go to gyms,” he said, they feel uncomfortable. It’s not welcoming.”

Responding to Gay City News inquiries, an Equinox spokesperson said that staff at the Manhattan club looked into the incident and said the lifeguard mistook the clothes for streetwear. Still, they declined to share their LGBTQ inclusion policies or handbook with the publication.

“We strive to be supportive of all members and want everyone to be able to enjoy the benefits of membership in the way that maximizes their comfort,” their statement said. “Equinox takes the member’s concern very seriously and is reviewing it with club staff.”

The New York City Human Rights Commission acknowledged Young’s complaint has been filed and encourages anyone else that has experienced similar incidents in the city to follow suit.

“The New York City Human Rights Law provides strong protections for transgender, non-binary, and gender-nonconforming people, including prohibiting discrimination and harassment in accessing facilities in places of public accommodation,” they said in a statement.

In 2019, Equinox and related fitness chain SoulCycle came under fire when one of their investors, Stephen Ross, held a fundraiser for Donald Trump that netted him over $12 million.

Equinox itself tried to distance itself from Ross, describing him as a “passive investor” and not involved in managing the business, as if the controversy is about his business decisions and not about Equinox’s profits going to reelect Donald Trump.

The luxury gym company tried to launch a misguided public relations campaign meant to convince members not to cancel their memberships. Equinox chairman Harvey Spevak announced the company would donate a million dollars to charity in an attempt to bolster its former reputation as an inclusive and welcoming environment.

Spevak and his fellow executives then decided to pit five charities against each other, asking Equinox members to choose which of the five would get more money than the rest out of the $1 million.

His friends dumped him when he came out. So a park full of strangers helped him celebrate.