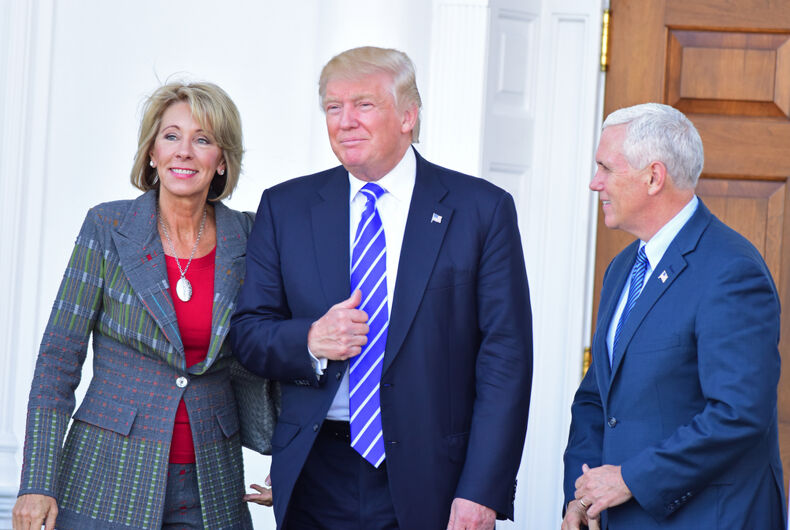 The Department of Education (DOE) has announced that it is starting the process to change a Trump era rule that requires colleges and universities to give funds and resources to student organizations that violate the schools’ anti-discrimination policies if they claim a religious exemption.

In a statement posted to the DOE blog, Acting Assistant Secretary for Office of Postsecondary Education Michelle Asha Cooper wrote that the Department “is currently conducting a review” of the “Free Inquiry Rule” passed in September 2020 under then-Secretary of Education Betsy DeVos.

The Free Inquiry Rule requires public colleges and universities to give “faith-based student organizations” an exemption to their non-discrimination provisions, rules that other clubs on campus are required to follow in order to get school funding and official status. The rule allows student groups to reject LGBTQ people, women, people of color, and others from leadership positions and exclude them if they cite their religious beliefs.

“I fear for my safety and the safety and mental health of my fellow students,” said Declan Galli, a sophomore at California Polytechnic State University and a member of the Cal Poly Transgender and Queer Student Union. Galli is a plaintiff in a lawsuit filed against the DOE to overturn the rule, saying that the DOE and DeVos overstepped their authority in creating the religious exemption.

“If colleges now have to promote student organizations that discriminate, it’s hard to believe the campus can keep us safe,” he said in a statement when the lawsuit was filed. “This isn’t a hypothetical situation. Last year, a professor and a dozen students rallied on campus, shouting that being gay is a sin. This Department of Education regulation allows these same students to start a group that would discriminate against me while still receiving funding from the fees I’m required to pay.”

Most of Cooper’s announcement is about how important religious freedom is to the Biden administration and doesn’t explain much about possible changes beyond “rescinding parts of the Free Inquiry Rule.”

“The Department is currently conducting a review of those regulations while keeping in mind the importance of several key elements, including First Amendment protections, nondiscrimination requirements, and the promotion of inclusive learning environments for all students,” Cooper wrote.

But the groups that sued the Trump administration over the rule are considering this the first step towards victor.

“We applaud the Department of Education for its willingness to reconsider this harmful regulation and for sending the message to colleges, universities, and their students that this wrong may soon be righted,” said Richard Katskee of Americans United for the Separation of Church and State. “We anticipate that the Biden administration will agree with us that discrimination has no place in our public colleges and universities – even if religion is used to justify it.”

“No college should ever face the threat of losing federal dollars for refusing to fund discrimination,” said Alison Gill of American Atheists. “Nor should religious student groups receive special privileges to discriminate.”

COVID-19 is on the rise again. Should we be traveling right now?