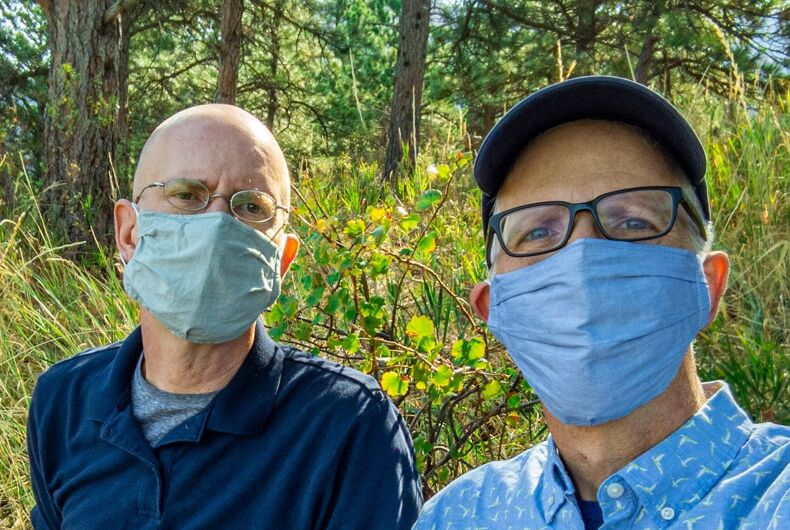 It seems that some people on social media have, uh, strong opinions about people who travel right now. Or, frankly, travel at all.

This doesn’t surprise me. Public shaming has been a part of almost every health epidemic in recorded history — from the Bubonic Plague to Typhoid, to the flu epidemic of 1918 and, more recently, to AIDS and SARS.

And in the Social Media Era, public shaming has become easier than ever.

Related: How do two gay digital nomads afford a life of continuous travel?

My friends know I flatly refuse to participate in public shaming: it’s far crueler than most people know, and it isn’t nearly as effective in changing behavior as they think. I suspect people mostly do it because it feels good, giving them a little burst of moral superiority.

Of course, after listening to COVID-deniers and anti-vaxxers for the last year and a half, even my patience has been seriously tried.

As for the specific issue of travel, well, that’s complicated, even more so during this pandemic. And yes, we are still in a pandemic.

Even so, after being on lockdown for more than a year, Michael and I have made the choice to continue our travels as digital nomads. We’re currently in Romania, where we’ve lived for a month, about to take the night train to Budapest, Hungary.

And, frankly, I’m a little frustrated by people who indiscriminately — and sanctimoniously — condemn what we’re doing.

For one thing, we’re making a point to travel responsibly. We’re both vaccinated, and we’re also still following fairly strict guidelines on mask-use and social distancing. On that night train, we reserved a sleeper car for ourselves.

In fact, we’ve been a lot more careful than the vast majority of people we’ve seen — travelers and locals alike — in our last three nomad destinations: Mexico, Turkey, and now Romania.

Since we left America, the delta variant has changed the equation slightly. We’re now even more likely to closely monitor local infection and vaccination rates.

But here’s a big piece of the puzzle that a lot of the critics of travel are missing: In the places we’ve visited, things simply couldn’t go on the way they’d been going for the past year.

In Puerto Vallarta, Mexico, where we spent most of the last winter in lockdown, the economy exists, in part, with day-laborers. This basically means if people don’t work that day, they (and their families) may not eat that night.

In April 2020, when the tourist industry basically evaporated overnight, it caused a hell of a lot of pain and suffering around the world. And especially in Mexico, which doesn’t have nearly the social “safety net” of the United States and Western Europe.

By the time Michael and I arrived in Puerto Vallarta, in November 2020, locals couldn’t have been more appreciative of our presence. We were as frustrated as anyone by the GaysOverCOVID phenomenon (where some gay and bi men gathered over the 2020 holidays for weeks of carefree partying), but locals seemed much more upset by the public nudity and obnoxious drunkenness than by the presence of tourists per se.

Things were also pretty bleak for the locals in Turkey, where we lived this past June and July. Our Turkish friend Duman, who had once owned a shop selling souvenirs, saw COVID wipe out his entire livelihood. He had to sell everything he owned at a massive loss and also lost his apartment. With the slow return of travelers, he’s just starting to stand on his own two feet again.

And our neighbor Resul, who had opened a wonderful little bakery just months before the pandemic, was right on the verge of losing his entire life savings too.

Are tourist-dependent economies and inadequate social systems in these countries the legacy of colonialism or past exploitation by more powerful countries? Probably!

But most locals still seemed incredibly eager to see the return of travelers like Michael and me.

The truth is, on Earth of 2021, Americans are incredibly privileged. But Americans have that privilege whether we’re living in Seattle or Sibiu, Romania. And by living in Romania — or Turkey, or Mexico — we’re able to directly share some of our American wealth with people who very much need it.

There are, of course, fair objections to the tourism industry: most of the actual money spent goes to corporations or local residents who are already very wealthy.

So we personally try to patronize small businesses as much as possible and tip generously. When the U.S. government sent out stimulus checks, we donated much of ours to the Puerto Vallarta food bank.

Critics of travel also point out that tourism can destroy, or at least greatly alter, local communities and cultures. But to some degree, this is happening with or without tourism. At this point, most people on this planet now consume some form of mass media, and they’re aware of differing standards of living. And, understandably, they want modern conveniences too.

Sure, you can call mass media a form of capitalist propaganda. But come on: modern medicine and contraception, and sanitation, and the communication of information — these are objectively good things.

Tourism and the travel industry give many people a fairly immediate way to raise their standard of living — and it doesn’t involve clear-cutting rainforests.

Besides, I’m really not comfortable seeing anyone as a helpless pawn — or telling them they simply have to wait a little longer in abject poverty for the inevitable “revolution.” Shouldn’t all people get some say in their own destiny?

Unfortunately, you can’t have it both ways: a more modern standard of living and no development at all. At least not outside of Fantasyland.

No, tourism isn’t a perfect industry. But it sure beats a lot of the completely centralized, environmentally devastating alternatives.

So yes, like most things in life, the issue of travel is complicated. But the idea that long-term travelers such as Michael and me — and, frankly, literally every good nomad friend we have — don’t seriously consider these issues is flat-out wrong.

Is this entire article just a case of “nomad fragility”? Nomading and travel, in general, were getting a lot of snide criticism and bitchy commentary even before COVID, and it’s hard not to take it personally.

But maybe I should just let it roll off my back. Who cares if some idiot on Twitter accuses me of perpetuating colonialism? Hey, the criticism of nomading is nothing compared to the criticism of “influencers” on Instagram — or even SJWs on Twitter.

Here’s the thing, though: I really believe in travel, especially the nomad lifestyle. I don’t think it’s merely a net-neutral thing in the world — I think it’s a massive net-plus. Nomading has personally made me a better person, and I think the world would be better off if a lot more people did it.

Travel fosters a greater awareness of the massive American and Western European privilege and the world’s almost overwhelming economic inequality. Nomading has made this much less abstract and very, very real for me, because some of the victims of this inequality are now my good friends.

Nomading essentially requires some form of Simple Living, which is better for the environment (and the soul!).

Travel often reveals the arbitrary, artificial nature of borders while encouraging a sense of oneness with the world. At the same time, it can make a person more respectful of the incredible beauty of cultural differences. There are so many wonderful roads to the same destination, which is, for most of us, simply to love and be loved (and also share good food!).

And yeah, responsible travel can help local economies financially. Travel isn’t a selfless act, but I still think Michael and I, with all our American privilege, are doing much more “good” out traveling than if we were back at home — even now, in the middle of a pandemic. Longer term, responsible travel can also help preserve the environment and the planet, especially considering some of the truly terrible alternatives.

So, hey, let’s tone down the simple-minded hyperbole and cut it out with the silly stereotypes, okay? We have enough problems in the world right now without people lying about what travel is really all about.

Betsy DeVos protected religious orgs’ funding even if they discriminate. Joe Biden is changing that.