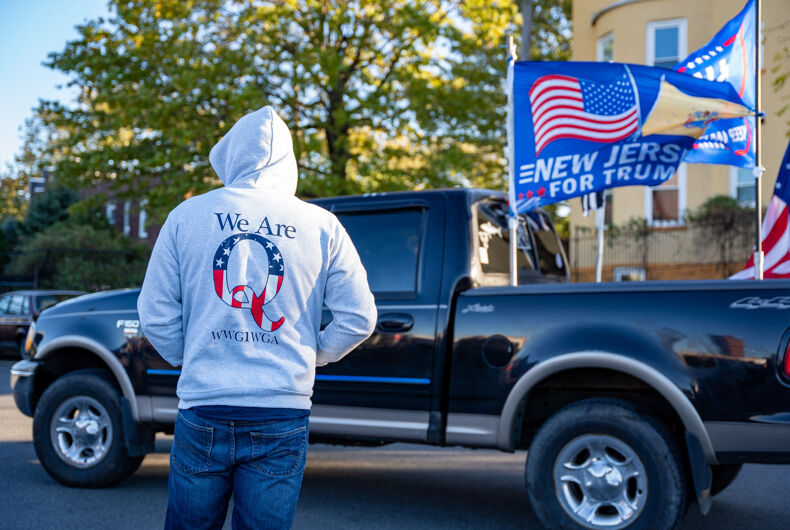 An alt-right online personality that became an influencer to hundreds of thousands in online circles on Telegram and Twitter has been unmasked as a man from Florida by a fact-checking technology company.

GhostEzra began a major figure in the QAnon conspiracy movement following Donald Trump’s loss in the 2020 general election. He amassed over 330,000 followers just from spreading falsehoods, conspiracies, and bigotry, like claiming that President Joe Biden is actually dead and sharing a film that tells viewers that Jewish people created communism to advance their plans for world domination.

Related: Bisexual man who duped Donald Trump gets arrested for scamming thousands from his base

“Folks listen up closely. We need some honest, non Zionist, non trannies running for Congress in 2022,” one post on Telegram from the account read as recently as June. He urged his followers to run for office because “The bar is low, you don’t even need to have all your teeth” and “Anyone who’s been in DC for years isn’t to be trusted.”

“Also got to grab em by the pussy to make sure nothing’s hanging,” GhostEzra claimed, referencing Donald Trump’s infamous remark on the Access Hollywood tape. “Now, do we have any applicants?”

The account regularly impersonated other figures on the right, most notably Ezra Cohen-Watnick, to the point that Cohen-Watnick’s attorney stated on Twitter that this was “The usual conspiracy laden Q’Anon garbage” and emphasized, “This is NOT my client.”

The account also spread conspiracies about the COVID-19 vaccines.

Today, the artificial intelligence company Logically revealed that after months of research they can positively identify the person behind GhostEzra as Robert R. Smart of Boca Raton, Florida. The company describes Smart as “an evangelical Christian and serial entrepreneur who attends several churches.”

Vice reports that he ran several Amazon reseller accounts that sold all kinds of products, including dog food and gardening equipment.

I will never stop laughing at GhostEzra accidentally outing himself thanks in part to him using his real Yelp account to review bomb a synagogue. https://t.co/PF96N1stO0 pic.twitter.com/OSOTnUxeH3

Smart, 39, was identified based on several bits of information he put online as GhostEzra via live videostreams, photos, and comments, such as times he streamed TV Emergency Alerts Systems, which helped researchers conclusively narrow down his location to specific regions in Florida.

GhostEzra also posted pictures of prices at gas stations and gave details of places he visited or drove by, such as the JFK Medical Center, which is in Atlantis, Florida. GhostEzra also posted a screenshot of a YouTube livestream, which identified the person watching the video as “Robert S.”

In a nutshell, here’s how we found him:

⁰⁰By identifying his state and a local gas station he posted a picture of on Telegram, alongside a few additional geographical clues, we were able to narrow down GhostEzra's location to within a ~8 mile (13km) radius. pic.twitter.com/qgyxr2NzgT

From there, researchers could use the information he provided to find Google reviews of gas stations and pinpoint exactly who was behind the account and where.

We then found a Google account used to review local restaurants, amenities, and that very gas station. It belonged to Robert R Smart, the man behind the GhostEzra persona.

GhostEzra used the time after the election to gain attention among QAnon users. Then he differentiated himself from others on the right by “routinely bad mouthing and separating himself from others on the far-right,” according to Amarnath Amarasingam, an extremism researcher and assistant professor at Queen’s University in Ontario. Amarasingam called this process “factionalism.”

GhostEzra attracted a unique faction of online users, first on Twitter and then on Telegram after being banned from Twitter following the January 6 insurrection. By March, GhostEzra had a following north of 300,000.

“[GhostEzra] routinely criticizes other influencers as basically sellouts, as not true to the heart of the movement,” Amarsingam said. “For one, the faction who follow him closely will be drawn deeper into his ideological bubble, which consists of anti-trans, anti-vax, antisemitic, and white nationalist content.

“Second, once these sorts of views become normalized and become part of your everyday consumption, it is not difficult to find other channels and groups on Telegram that are much darker and more dangerous.”

In turn, others in QAnon circles also became weary of GhostEzra, with one opponent even posting that his anti-semitism hurt the QAnon movement. “Do you see how disinformation ruins our movement?” they posted.

But GhostEzra’s following and influence continued to grow. After the figure deemed “Q” had “disappeared,” GhostEzra was deemed next in line.

“Since the Twitter crackdown, GhostEzra has quickly become one of the biggest influencers in the QAnon community by weaving together a tapestry of blatant antisemitism, transphobia, and outrageous conspiracy theories,” journalist Mike Rothschild said of the account’s rise.  “GhostEzra has emerged as a potential leader for a community desperately in need of one.”

Now that the QAnon “leader” has been identified, Smart has not commented publicly and posts have not been made to the GhostEzra Telegram account.

In October, Smart was quoted in the South Florida Sun Sentinel, which described him as “convinced” that socialism is a “menace” to America. He was attending a Trump rally with his Colombian wife and their son led by Donald Trump Jr.

“It starts small, a little bit here and a little bit there, and it turns into a Venezuela,” he told the paper.

This is a good question – will revealing GhostEzra shut his gimmick down?

It might. The last three big Q influencers to be identified were QMap, IET, and Neon Revolt. All three have either vanished or greatly reduced their profile and stopped making Q content. https://t.co/wHsgpEr573

Robert Smart has a family. Does he really want to go down with the sinking ship of a conspiracy guru whose gimmick is posting antisemitic memes and guessing who and who isn't lying about their gender? I sure wouldn't.

Superman is going gay in shocking twist for decades-old franchise

Betsy DeVos protected religious orgs’ funding even if they discriminate. Joe Biden is changing that.