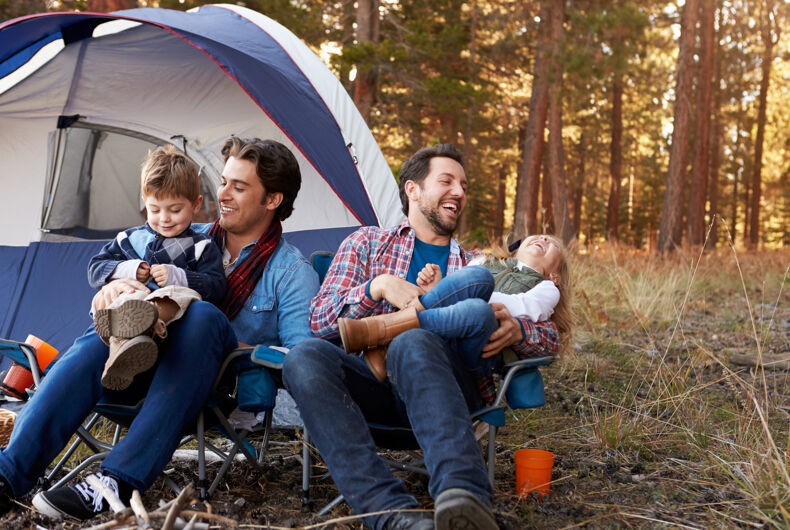 As a global pandemic changed the day-to-day lives of the entire country, it inevitably caused shifts in the ability for people to find an escape from their responsibilities, work, and careers. Families across America have had to rapidly adapt to spending much more time together or apart, navigating much more difficult obstacles than many were accustomed to, and figuring out some outside-the-box ways to find leisure.

So it’s not a surprise that many turned to a tried-and-true way to spend their free time: camping. LGBTQ families, especially ones headed by a same-sex couple, represented a large percentage of those entering the camping world.

Camping, of course, is far from a new convention, but it is a new option for many families who are unsure how to adjust to vacation time in a post-pandemic world. The activity was already growing in popularity in recent years, but data compiled by Kampgrounds of America (KOA) shows that camping has started trending among a much younger, and more diverse, population than before.

KOA sponsored a wide-ranging survey of campers for the 2021 North American Camping Report. In total, the research found that approximately 48.1 million people camped at least once in 2020, which was an increase from the year before by about six million people.

Another key finding from the data is the revelation that the people that are camping are more diverse than ever before. For example, more than 60% of first-time campers in 2020 were non-white identifying individuals, underlying that campers are “becoming more representative of many diverse populations and communities of people.”

LGBTQ people are showing up more at campgrounds too.

Toby O’Rourke, the CEO of KOA, explained to LGBTQ Nation what this information means for her company, considered the largest network of dedicated campgrounds in North America. O’Rourke is the first woman to helm the company, which was founded in 1962.

This week we named a new CEO. Toby O'Rourke is KOA's first female CEO and President. She inspires us today and always! https://t.co/200jwaAJl9 #InternationalWomensDay2019 pic.twitter.com/TNmAp2GGRz

“Even when I started at K.O.A 10 years ago, I’ll tell you that it was definitely considered more of a ‘predominantly baby boomers, Caucasian’ activity. We have seen that shift dramatically over the past 10 years, shifting younger and a dramatic increase in diversity,” O’Rourke reflected.

As she understands what breaking a representation barrier can mean for a community, KOA has made several diversity, equity and inclusion (DEI) efforts under O’Rourke, and she has committed to the Outdoor Industry CEO Diversity Pledge in KOA’s name.

“There’s something very special about a campground that it’s pretty hard to even articulate, but it’s almost like a small town,” she said.

This figures in with the overall findings from the report, and KOA’s expectations for 2021.

“We’re still seeing in our report from early June that 30 percent of people are still hesitant about travel because of COVID,” she said, “and I think that those people may be turning to camping as a great vacation option. That’s what we saw last year.”

How and why LGBTQ people went camping is different than other campers, according to information shared with LGBTQ Nation. While a majority of non-LGBTQ identifying campers credit their love of the outdoors as the reason they first took interest in camping, LGBTQ people said getting away from crowds or noise influenced them to look into camping.

Overall, camping offers a generally safe getaway for LGBTQ people, as people can find solace camping away from most of society where there are constant instances of discrimination and prejudice.

39% of LGBTQ campers say they camp to escape stress, and 37% because they find it relaxing.

“I truly believe that there is no better activity for bringing people together than being outside and camping,” O’Rourke said, “that’s the whole mission.”

O’Rourke pledged that KOA is going to “refresh” past research efforts to assess the perception of inclusion and safety at KOA sites. They have also previously partnered with Chris and Rob Taylor, creators of the blog “2TravelDads,” to produce content explicitly for LGBTQ campers.

“We want to actively work to make sure everyone is welcome in the outdoors,” she said.

O’Rourke reminded LGBTQ Nation that camping doesn’t look one specific way, and like in other areas of life, LGBTQ people are more likely to explore the non-conventional ways to camp.

KOA is similar in that way, as the company has segmented their business line of experiences, and offers a variety of accommodations.

“We primarily serve the RV [camper], as 85% of our business is RVs,” O’Rourke said, “but most KOAs have some form of lodging, in the form of cabins or ‘glamping’ accommodations like canvas, tents, or yurts [a portable round tent]. Then, all KOAs have sites for tents as well.”

Leave a 👍 if you'd like to be here right now.
📷 IG's thejohnswerehere pic.twitter.com/otlpm6nBpk

LGBTQ campers also tried new camping activities for the first time more than other campers in 2020. 32% of LGBTQ campers tried backpacking, and another 32% tried “overlanding,” which is travelling off-road by vehicle and without established streets.

35% of LGBTQ campers took the “glamping” approach, which is a more “glamorous” camping experience accompanying more non-camping amenities than typically involved in camping.

33% of LGBTQ campers would consider purchasing an RV, and 43% are interesting in staying in an RV for travelling in the future, otherwise called “van life.”

“We have about 25 resorts across the country which are meant to be places you don’t even have to leave the campground to have a vacation,” O’Rourke said, referring to the KOA Resorts division.

Essentially, camping in less charted environments, but maintaining access to some form of “indoors,” is notably common among LGBTQ campers. For example, LGBTQ campers are twice as likely to first camp in a cabin than other campers.

O’Rourke expressed that she expects these trends to continue throughout 2021. Noting that KOA does research monthly, she said, “To put it in perspective, we’re tracking 30% above [business from] 2019 right now, our best year in history. So a lot of those people that came up to camp last year are returning to camp.”

So as the demographics of camping continue to change, LGBTQ people are helping to revitalize the popularity of getting outdoors — even if it looks different from the idea of camping that people have gotten used to.

Some things will likely remain, though. Hopefully, the s’mores will be one of them. KOA’s s’more of the month during June — Pride month — was fittingly the “Cool S’more,” but this month’s, the “Firework S’more,” is right on time to fire up the summer.

We bet you've never had a S'more this cool. Beat the summer heat with ice cream inside our June S'more of the Month. pic.twitter.com/9rvUwvnKvi

There's no better way to celebrate Canada Day and Independence Day than with our July S'more of the Month!

Will you give it a try? #CanadaDay2021 #IndependenceDay pic.twitter.com/IoNaEGzEDX