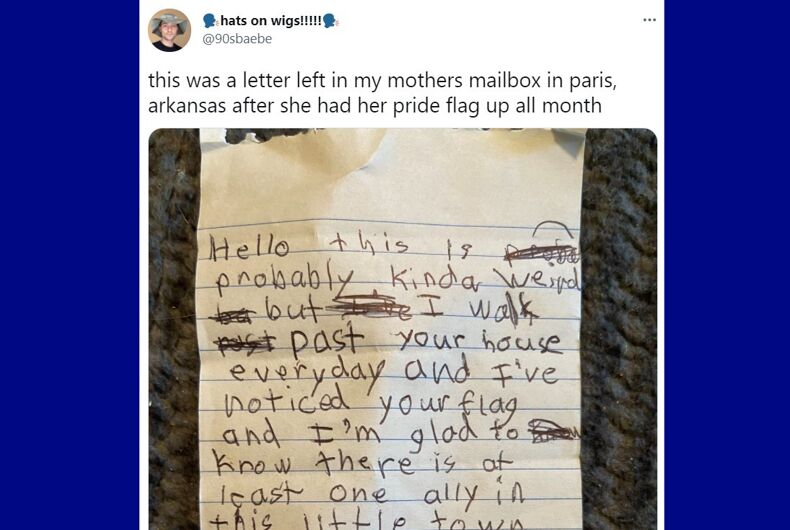 A “young LGBTQ+ person” has gone viral after they left a grateful letter for a neighborhood mom who put up a Pride flag in front of her house.

Stephanie Robertson of Paris, Arkansas (population 3,413) put up a Pride flag in front of her house after her 30-year-old son Levi gave it to her last year.

But Robertson wasn’t expecting the flag to have the impact it had, particularly on one young person in the neighborhood.

“She was excited to hang it up for the first time this year and kept it hanging up outside her home all throughout June,” Levi told PinkNews. “She texted me yesterday and was like, ‘You’re not gonna believe the letter I found in our mailbox,’ and sent me a photo of the letter.”

“Hello this is probably kinda weird but I walk past your house everyday and I’ve noticed your flag and I’m glad to know there is at least one ally in this little town,” the wrinkled note read.

It was written on piece of paper from a small notepad with several words crossed off as the letter-writer tried to best convey their gratitude for feeling supported in what one can imagine isn’t the easiest place to grow up LGBTQ.

Robertson doesn’t know who wrote it other than that they were “a young LGBTQ+ person,” which is how they signed the note.

“I immediately called her and told her how profound and awesome it was that her hanging it made a child feel seen,” Levi recounted. “She agreed and kept saying how she couldn’t get over how sweet it was.”

this was a letter left in my mothers mailbox in paris, arkansas after she had her pride flag up all month pic.twitter.com/O5a7Rh80BJ

The tweet has been liked over 750,000 times so far, and Levi is happy that the world is seeing how great his mother is.

“She’s such an incredible person,” he said. “She’s going to find a Progress Pride flag window sticker for the front of her house to keep up all year.”