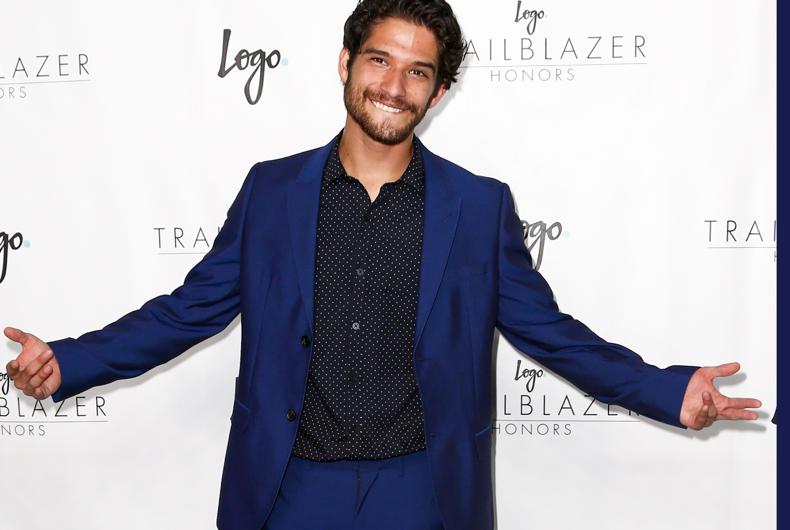 Entertainer Tyler Posey, most recognized for starring in MTV’s hit series Teen Wolf, has come out as sexually fluid in an interview with NME.

The actor and musician – speaking on recent accusations that he’s “gay-baiting” fans with an OnlyFans account – described himself as sexually fluid, after previously sharing that he’s had sexual encounters with other men. His girlfriend Phem helped him realized “that I fit under the queer umbrella.”

“[Phem] helped me realize,” Posey said, “that I fit under the queer umbrella and that I’m sexually fluid, I guess.”

He then emphasized, “No, not ‘I guess,’ I don’t want anyone to take this [interview] and be like: ‘Well, he was kind of wishy-washy about it.’”

Posey starred on Teen Wolf from 2011 to 2017 as high school outcast and werewolf Scott McCall. During much of the show’s six year, 100-episode run, it averaged over 2 million viewers a night and a huge fandom online. Posey starred opposite of fellow out actors Dylan O’Brien, Adelaide Kane, and Colton Haynes. They also co-starred with Crystal Reed, Tyler Hoechlin, Holland Roden, and Dylan Sprayberry.

Posey is also a musician and currently co-headlines the Internet Killed the Rockstar Tour with the bands Mod-Sun and Girlfriends. He sat down for an interview with the music magazine NME, where he clearly announced his public coming out.

Posey made waves by starting an adult page on the subscription site OnlyFans in early 2020. The site allows users to receive direct access to an array of content from creators, most of whom are adult entertainers, while the creators tease that content online – although only subscribers could access the full view.

In a post in October, Posey shared that he had sexual experiences with men. This led Posey to receive allegations of “gay-baiting.”

Posey responded to the allegations in the interview, saying that one person is behind them. “Someone asked if I’d been with men, and I said yes,” he said.

“Since then there’s been this really loud person online – I’m pretty sure it’s only one person – and they’re trying to call me a ‘gay-baiter’: pretending to be gay to get money, essentially.”

He called the allegation “bizarre,” and noted that the accuser “made this one comment that kind of sparked me wanting to do something about cyberbullying. They said: ‘I killed your mother’ – like, this person actually claimed they killed my mother.”

“I’m sober now,” he said, “and I’ve been working a lot on my mental health, so I’m in a place where I can somewhat laugh at that kind of thing. But I know that other people who deal with this kind of shit may not be as strong mentally.”

He has decided to pledge his OnlyFans subscription money and donations “for only good and spreading awareness for bullying and cyber bullying,” he wrote in a recent post to his page.

Posey has been frank about his past issues with mental health and substance use. That influenced his participation in sex parties and other sexual encounters with men, he shared.

But, now that he’s sober and seeking mental health care, Phem – an alt-rock singer who is also out, who Posey’s dated for a few months – has helped him come into his present identity.

“I’ve been with everybody under the sun, and right now I’m in the best relationship that I’ve ever been in with a woman, and she’s queer too.”

In 2016, Posey walked down Gay Street in New York City, proudly proclaiming in a Snapchat video, “I am this and this is me. I never felt more alive. I’m gay!” He later clarified that he was not seriously coming out at the time, and apologized for having “lessened how big coming out is.”