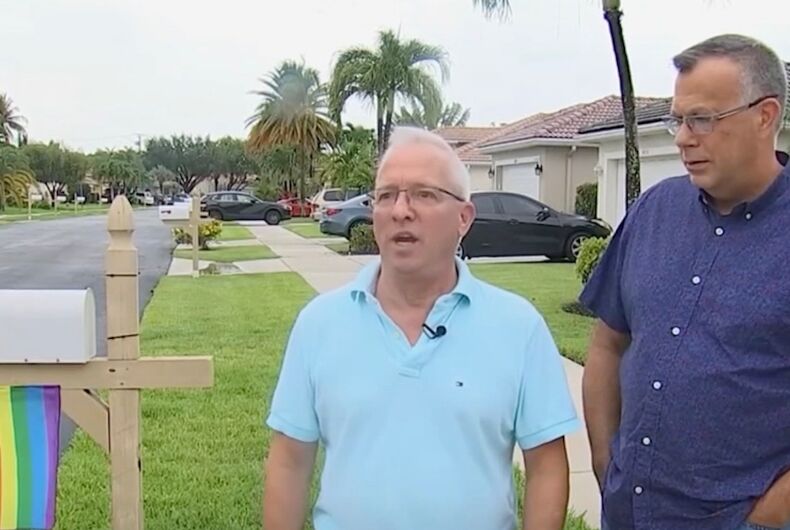 A Florida couple won’t back down after their homeowners association threatened to fine them for hanging a small Pride flag outside their home for Pride month.

Mike Ferrari and Bob Plominski were shocked to receive a notice from the Eastland Cove HOA in Broward County saying they will be fined $50 a day if they do not remove their flag.

For ten years, the couple has flown a variety of flags–including the Pride flag–outside their home. While technically, the HOA rules say residents can only fly the American or military flags, the couple has never received a violation notice for flying other flags, such as one in support of the March for Our Lives.

“I really think the citation is because it’s a gay pride flag and someone in the neighborhood is offended, simple as that,” Ferrari told NBC.

“I got upset. We’ve done this before and it’s a simple showing of our pride to the community and it’s up for 30 days,” Plominski added. “We were in shock they were going to do that.”

HOA president Bob Brosseau told the New York Times he supports the couple flying the flag, but it was out of his hands after a resident complained. Legally, he explained, the HOA has to act once a complaint is filed or risk being sued.

“As a board member, I was very upset that it was even brought up,” he said. Brosseau and one other board member voted against issuing the violation notice in a 3-2 vote.

In July, the couple can appeal the violation before a committee, which will determine whether they will have to pay their fines for refusing to comply with the order to take down the flag.

In the meantime, the situation has only fueled Plominski and Ferrari’s desire to display their pride even louder. Not only have they hung more Pride flags outside their home, but they have also gone door to door passing them out to neighbors who want to stand in solidarity with them.

According to the New York Times, eleven of their neighbors are now flying Pride flags outside their homes.

“My husband and I decided we weren’t going to stand by and take down our flag because somebody, I feel, was offended by the flag in our community,” Ferrari said. “Ten dollars, $50, $100 a day — it’s staying up.”

“It’s going to stay up until June 30th,” Plominski said to NBC. “We as a community worked really hard to earn and get to where we are today. We’re not going to back down on this one.”