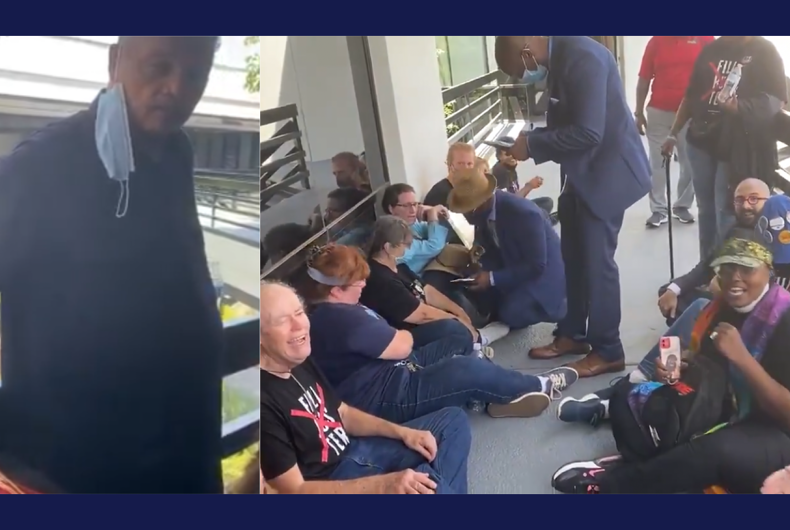 The protest, a sit-in organized by the Poor People’s Campaign, sought to persuade the out lawmaker to support reform of the filibuster rules in the Senate. That would allow key civil rights legislation like the Equality Act, which Sinema nominally supports, to pass into law.

The arrests came after the owner of the property where Sinema’s office is located reportedly called the police. All were charged with trespassing and released after brief detainment, the Phoenix police stated.

Rev. Barber, the co-chair of the campaign, organized the “Moral Monday” rally, which started at Kachina Park before the crowd marched to Sinema’s office, inside the Biltmore Talon Center. Rev. Jackson, 79 and four years from a Parkinson’s disease diagnosis, led the march of almost two miles.

Rev. Jackson said the protest was necessary as America is amidst a “civilization crisis” with “battle lines drawn,” according to the AP.

“The power’s in you, the people,” he said to the protestors.

Barry Smith, a retired schoolteacher, told his fellow protestors, “I taught kids for 25 years that this is what you have to do to change things, and now it’s time to step up. We’re supposed to be a democracy, so having a minority running the Senate is just so infuriating.”

Revs. Barber and Jackson rang the bell to Sinema’s office, which was not open at the time, than sat outside and even began singing. They were arrested soon after.

On the way to jail, we’re gonna let it shine!

No. Rev. Jackson and Rev. Barber knocked on the door and rang the bell. My understanding is that they received no response at all. https://t.co/tSABdWAsKQ

State Sen. Martin Quezada (D) was also arrested. He said that he knew that Sinema was watching the developments from the protest.

“My hope is that, after the events that took place today, she will take a closer look at this and she will start to reconsider what her position is on the issue,” Quezada said.

This window of opportunity won't be open forever. We need @SenatorSinema to act with urgency and #EndTheFilibuster before it closes. pic.twitter.com/iucUJ7RwIK

Rev. Jarrett Maupin said after the arrests, “All these people here get credit for having this rally. It has been a very successful one, and they will be getting out momentarily.”

“We are willing to pay the price to help our nation,” Jackson said after his release.

Rev. Jesse Jackson emerging from suv after civil rights icon was arrested by Phoenix PD in protest at @SenatorSinema’s district office. Rev William Barber was also in vehicle after his arrest. Protesters were charged with misdemeanor criminal trespass. pic.twitter.com/g8DHiQ7Uob

To the @Mississippi_PPC & to all our #PoorPeoplesCampaign state families & partners who joined us across the nation for a powerful #MoralMonday taking nonviolent moral direct action to save our democracy:

Sinema released a statement following the sit-in, expressing her continued support for the filibuster, despite the protests and growing pressure from constituents, progressive advocates.

Claiming the filibuster “compels moderation and helps protect the country,” Sinema said, “To those who want to eliminate the legislative filibuster to pass the For the People Act (voting-rights legislation I support and have co-sponsored), I would ask: Would it be good for our country if we did, only to see that legislation rescinded a few years from now and replaced by a nationwide voter-ID law or restrictions on voting by mail in federal elections, over the objections of the Senate minority?”

Sinema, along with Sen. Joe Manchin (D-WV), has refused to reform the filibuster, a procedural move used to stop legislation from moving through the body. It is a relic of Jim Crow and is currently being used to stop voting reform, raising the minimum wage, and landmark LGBTQ civil rights legislation.

While LGBTQ activists and donors pointedly issued an ultimatum demanding Sinema get on board or lose support from the community, the senator published an op-ed in the Washington Post defending her decision to scuttle bills that tackled issues she campaigned on. By refusing to remove the filibuster, Sinema has essentially doomed her own priorities.

John Waters confesses that “country music made me gay”

They’ve been together for 35 years. Now their love has gone viral.