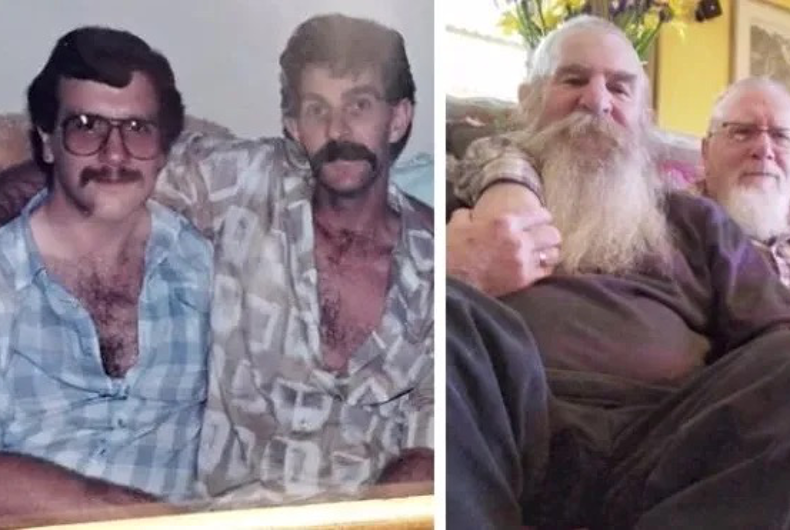 Peter Robinson and his partner, Murray Buchanan, have been together for 35 years and their love is just as strong as ever.

But now the internet is celebrating the Australian couple’s anniversary after Robinson tweeted photos of the pair when they first started dating and now.

Robinson told our sister site, Queerty, that the two met while out on the town.

“We met at a nightclub on a Friday night,” he said. “I was introduced to him by his ex-partner.”

“It was just before the AIDS epidemic hit in Australia.”

“We registered our relationship as significant other as marriage wasn’t an option at that time. That was not legal until 2017 in Australia,” he said. “The registration gives us the same rights as a married couple and doesn’t bring religion into it. We did not see a reason for it.”

Robinson says the secret to a long and happy relationship is easy.

“We basically have two rules: 1. Never go to bed on an argument. 2. And resolve an argument before leaving each other for work, etc. Always part with a kiss. It may be the last one you ever have. Sounds silly and simple,” he said, “but it has worked for us.”

35 Years ago I met this amazing man. Love him even more today. pic.twitter.com/63o5gusCAn

As Robinson’s photos swept the social media site, users quickly responded. The tweet racked up hundreds of thousands of likes and hundreds of well wishes. Others sent photos of themselves with their longtime partners.

sending you guys so much love! you two are precious pic.twitter.com/UvEOT5jsQi

For real though EVERYONE deserves to find someone special to grow old with and be happy just like these two wonderful men.

To anyone reading this, your special someone is out there. And to those who already found theirs, don't let them go and be happy

I send my virtual hugs💕 pic.twitter.com/ed7D51KKVT

this is so wholesome, i hope y'all have a good day pic.twitter.com/lWT6DSzlce

Awesome. Congratulations. I’ve been with my mate and husband 51 years and counting. I am so glad to see “us” who love who we love out in the public eye.

This brings me the energy to believe in love at what your age is. I'm so proud of you guys. And thank you for inspiring so many people in here. Wish you the best and health for the rest of your lives. I want to cry so hard rn 😓😥😭😭😭 pic.twitter.com/fCLQtrlF5L