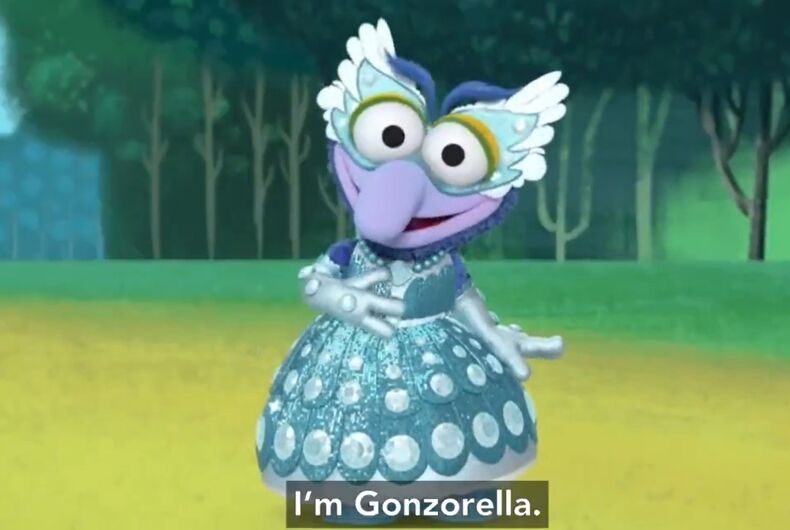 The animated children’s show Muppet Babies is teaching kids an important lesson about acceptance and gender in a new episode that shows the popular character Gonzo coming out as a princess.

Gonzo is a little blue monster who has always been assumed to be male. But, Gonzo says in the episode, that’s not “me.”

Related: Meet the gay man behind many of your favorite Muppets characters

Miss Piggy throws a ball in the episode and when Gonzo says they want to wear a dress, she pompously tells him that girls wear gowns and that the boys will come as knights. Kermit and his pals try to reassure Gonzo that being a knight is cool, but they’re obviously dejected and walks away.

Gonzo’s friend Rizzo becomes a “fairy ratfather” and grants they’re wish to become a princess for the ball, complete with gown and glass slippers. They have a wonderful time and when the other characters catch back up with them, the group excitedly tells them about the mysterious princess who attended the ball.

Gonzo comes out as the princess to the other muppets and is met with immediate acceptance as their friends apologize for putting them in a box based off their own expectations of how Gonzo should dress.

“You all expected me to look a certain way,” Gonzo tells them. “I don’t want you to be upset with me, but I don’t want to do things because that’s the way they’ve always been done either. I want to be me.”

Gonzo’s declaration was met with just as much enthusiasm online as the LGBTQ community celebrated with them.

I'm sobbing the they/them pronouns and gonzo got to wear the dress 😭 this is so cute https://t.co/gdD9g4jab9

I rise for my Queen Gonzo💚🌈

Anita Bryant’s granddaughter is marrying a woman. Grandma isn’t happy for the bride-to-be.

John Waters confesses that “country music made me gay”