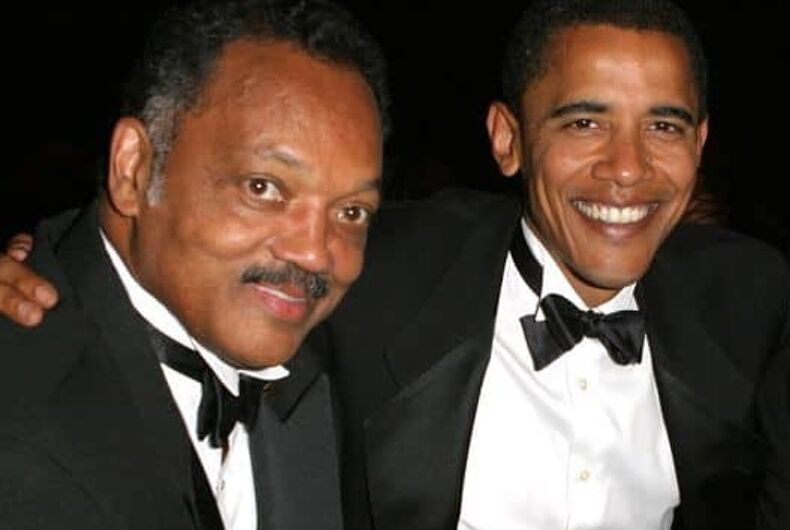 In the 1970’s, Democratic presidential candidates didn’t talk to gay and lesbian organizations, and LGBTQ people were either largely ignored in national politics or the victims of Republican attacks.

In 1992, the New York Times ran the headline “Gay politics go mainstream” as Democratic presidential candidate Bill Clinton made a push for the LGBTQ vote while Republicans made their opposition to all things gay a national campaign theme that continues to this day.

The change among Democrats was rapid, but it hardly happened overnight: It took three presidential elections in the 1980s to show progress.

A big part of that progress is owed to an important event in black history. In 1984, Jesse Jackson became the second African-American to run a national campaign for president in a major party’s primary. In 1988, he was the first black candidate with a shot at winning, getting 29% of the popular vote in the primary, behind Massachusetts governor Michael Dukakis’s 42%.

In those years, the Democratic Party was evolving from an ideologically diverse coalition of state and regional parties to the national coalition of diverse populations that it is today. Jackson foresaw this change, and his candidacies helped make LGBTQ people a major part of today’s Democratic coalition.

From “unmentionable” to the DNC

Jackson was a prominent activist in the Civil Rights Movement in the 60’s and continued his organizing work in the 70’s and 80’s.

In 1984, he entered the Democratic presidential primary. He was written off as a fringe candidate, but he did manage to win 21% of the popular vote, losing to Walter Mondale.

The 1984 election was the first Democratic presidential primary in which all the major contenders – former Vice President Mondale, Senator Gary Hart, and Jackson – spoke with gay and lesbian organizations. In 1980, only Senator Ted Kennedy had.

While Jackson ended up losing, he made a strong showing and spoke at the Democratic convention in 1984. There he delivered his famous “Rainbow Coalition” speech, the first speech at a national convention to mention gays and lesbians.

Jackson’s speech presciently described the evolution of power and politics in the U.S., referring to “the Rainbow Coalition,” which he described a coalition of oppressed groups that started as the as the “shared passion” of black and Jewish activists in the 60’s.

Jackson said the Rainbow Coalition had to be put together again, but this time it was going to “make room” for populations like Arab-Americans, people with disabilities, Hispanics, and gays and lesbians.

“We must address their concerns and make room for them. The Rainbow includes lesbians and gays,” he said. Some people cheered when he said the word “lesbian.”

“No American citizen ought be denied equal protection from the law.”

This was in 1984, when thousands of people had already died from AIDS, there was not treatment on the horizon, and Reagan had yet to mention the growing epidemic in public. Mondale did not make gay rights or HIV/AIDS an issue in his campaign.

In October of 1987, after Jackson had announced his second bid for the presidency, he spoke at the Second National March on Washington for Lesbian and Gay Rights. He was the only Democratic candidate to do so.

“We wanted Reverend Jackson because his platform embraces the kind of social and political agenda we in the gay community are seeking,” March co-chair Pat Norman told the New York Times. “And the gay community also played a major role in his 1984 Presidential bid.”

The contrast between Jackson and Dukakis on gay and lesbian issues could not have been more stark. As Massachusetts governor, Dukakis signed a law that banned same-sex couples from being foster parents if there were any opposite-sex couples available.

He spent the primary campaign defending the homophobic policy. “I just happen to think that’s better,” he said, referring to heterosexual parents.

Dukakis was also criticized for failing to save an anti-discrimination bill in the Massachusetts legislature, for saying he would not sign an executive order banning anti-gay discrimination in the federal workforce, and for supporting a state policy that allowed insurance companies to require customers to get HIV tests.

Still, he did meet with LGBTQ organizations. At a meeting with gay rights activists in Pasadena just before the California primary – with gay protesters outside calling Dukakis a “killer” for his non-existent HIV/AIDS policies – someone shouted “You’re anti-gay. Why not say it?”

When pressed on his opposition to gay foster parenting, he replied, “There is no constitutional right to be foster parents.”

Jackson capitalized on his opponent’s anti-gay record, with a surrogate telling the press that Dukakis had “a very fundamental homophobia.”

At a primary debate, Jackson mentioned the Second March on Washington: “I saw people in their wheelchairs who are dying of AIDS…. Not one of the [Reagan administration] officials would come downstairs and shake their hand.” He drew cheers when he talked about AIDS “hysteria.”

At the Democratic convention that year – where he conceded to Dukakis – Jackson described his vision for the Democratic Party again. For him, leftwing politics were fundamentally about identity, even as those identities are woven together for broad support social justice.

He compared various marginalized groups’ demands to patches on a quilt where each patch was individually “not big enough.” And his list still included gay people.

“Gays and lesbians, when you fight against discrimination and a cure for AIDS, you are right – but your patch is not big enough,” he said.

“But don’t despair. Be as wise as my grandmamma. Pull the patches and the pieces together, bound by a common thread. When we form a great quilt of unity and common ground, we’ll have the power to bring about health care and housing and jobs and education and hope to our Nation.”

In the 1988 campaign against Bush, both candidates took similar positions on HIV/AIDS and neither made LGBTQ equality a major campaign issue. But Democrats generally were getting used to hearing about us.

Jackson’s campaign represented a competing vision for the Democratic coalition as a coalition that is defined by America’s racist history and focused on social and economic justice so that it is open to other marginalized groups. And gay people were included in that coalition.

It’s hard to say that he didn’t win in the end: the voters who put Barack Obama in office in 2008 looked a lot like Jackson’s vision.

This Muslim country’s support for transgender rights shames the U.S.