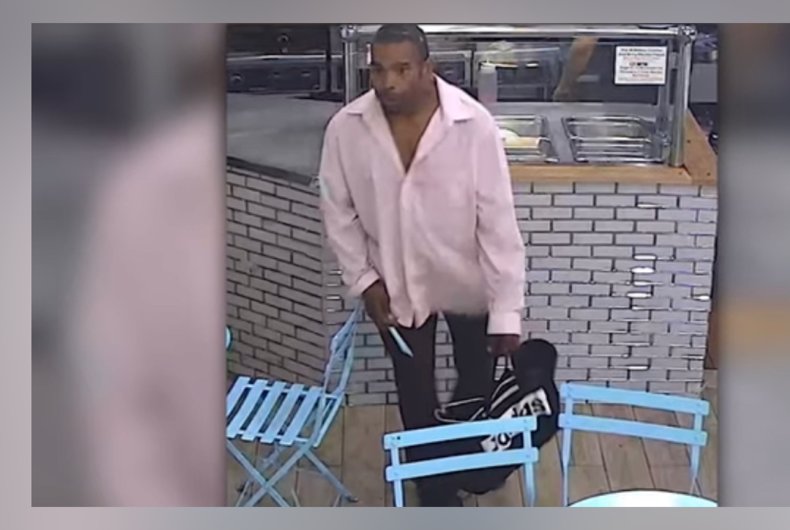 The New York City Police Department (NYPD) have made an arrest in an assault that took place earlier this month in Queens.

Fifty-five-year-old Ramon Castro has been arrested and charged with the assault of an 34-year-old man, whose identity was being publicly withheld. The victim has since spoken out about the assault.

The assault took place on July 6 outside of an apartment building in Jackson Heights.

The victim and a group of friends were waiting for their orders outside a food truck in the early morning hours. That’s when a verbal dispute started, which prefaced the slashing.

The NYPD said that anti-LGBTQ remarks were yelled by the perpetrator, who had a blade and then slashed the victim. The other friends chased Castro for a number of blocks, leading him to a yogurt store where he appeared in surveillance footage.

The victim suffered at least one laceration to his left cheek. He was taken to Elmhurst Hospital and released.

The NYPD Hate Crime Task Force had released a picture of the alleged suspect after the assault.

Castro was apprehended on drug charges earlier this week, before he was identified as the suspect and charged with assault, menacing and aggravated harassment, all during the course of a hate crime.

According to the New York Daily News, Castro is a homeless man with an arrest record dating back to 1982 which includes being booked at least 90 times in an almost-40 year span. He is currently being held in jail, unless he can obtain the bail of $500,000 bond or $250,000 cash ordered by a judge on July 15.

Milton Lobos Salguero identified himself as the victim and said, “Everything gives me anxiety now.”

Castro apparently called him and his friends “Latino faggots” repeatedly. Castro then pulled out a knife — previously described as an unidentified object by the NYPD — and began swinging it at the group.

Salguero’s wound required about 16 stitches, he reported. “I looked down and I saw blood everywhere,” he said. “Just dripping. All my friends started to freak out.”

He shared a picture of the bleeding with the Daily News.

“Think about it — if it was two inches lower he would have hit my neck and I wouldn’t be here,” Salguero said, “I’d be dead lying on the floor.”

The close call with death has started to mentally affect Salguero, who says, “[When] I fall asleep at 6 a.m. I close my eyes and I see him — his face looking down at me.”

Salguero, who moved to the U.S. from El Salvador about 15 years ago after being sexually assaulted there, told the Daily News, “I hope he rots in jail.”

The sight of knives set off his anxiety and stress, making him unable to go to his job at a restaurant in Long Island. Additionally, his stress-induced vitiligo condition has made pale patches on his skin. He’s only able to drink water and eat soups after the assault.

“I had to flee my country because of the crime and the gangs that wanted to kill me,” Salguero said, just to face similar violence here.

“Everything hurts… it’s given me a terrible depression,” he said.

Castro also faces separate charges stemming from multiple burglaries, including an attempt to steal an ATM from a nightclub, all within the last month.

Castro’s attorney asked for all the charges to be consolidated because it is hard for him to keep track of his trial dates.

Hong Kong has become a police state. So why are the Gay Games still being held there?