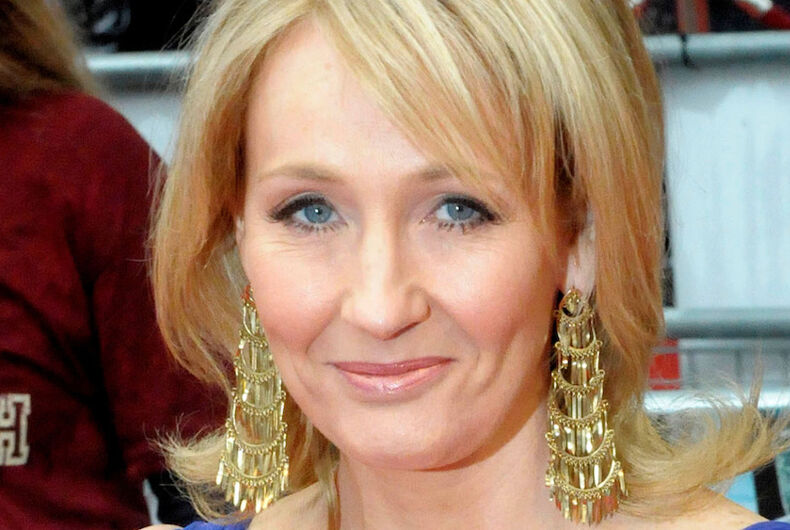 Harry Potter author J.K. Rowling says that she has received a “tsunami of supportive emails and letters” since making anti-transgender statements from women who she believes were told to “sit down and shut up,” putting her anti-LGBTQ beliefs back in the public spotlight.

Rowling – who has 14 million followers – was responding to a trans man who goes by @ftmlorastyrell on Twitter and has several hundred followers, and the responses to her tweet attacked trans women even though the original discussion was about trans men and non-binary people.

The whole discussion started with Positive Birth Movement founder, author, and journalist Milli Hill, who got mean responses on Instagram when she said that obstetric violence – poor treatment and abuse directed at people giving birth, usually in a medical context – is only violence against women in response to someone else who wrote that obstetric violence affects trans men and non-binary people.

Hill wrote a long article about the ordeal. From her account, it doesn’t appear that she lost any paid work, faced physical violence, or got death threats. The comments she quoted in her piece called her “harmful,” “vile,” and “transphobic.” A few said they would discourage others from buying her books. She also reiterated that patriarchy is “a system that oppresses and damages women on the basis of their sex,” which she stressed meant “sex as in biological sex,” as if trans women aren’t oppressed by patriarchy.

She put the title “I will not be silenced” on top of the article – because of course – and then @ftmlorastyrell on Twitter wrote a short and polite response to her.

“You obviously haven’t learned from the response J.K. Rowling got from her post,” he wrote. “You aren’t incorrect that obstetric violence is sex-based. But how difficult is it to acknowledge that not everyone who is capable of giving birth identifies with the female or woman label?”

Despite her hundreds of millions of dollars and celebrity status, Rowling is not above checking her Twitter mentions and calling out someone she never heard of when she feels her honor has been insulted.

“Judging by the tsunami of supportive emails and letters I’ve received, if women learned anything from the response to my post it wasn’t that they should sit down and shut up,” Rowling wrote, even though @ftmlorastyrell didn’t tell anyone to “sit down and shut up.” Rowling sent “solidarity” to Hill, who she called “brave and fabulous” for not changing her opinion in the face of online criticism.

Judging by the tsunami of supportive emails and letters I've received, if women learned anything from the response to my post it wasn't that they should sit down and shut up. Solidarity to the brave and fabulous @millihill (and I love your books, by the way!) pic.twitter.com/dLdsYR73Qd

This isn’t the first time Rowling has said that she has received massive support for her anti-trans views. In a Good Housekeeping interview last year, she claimed that 90% of the response she has received for her opposition to trans rights was positive and from people who said they were “afraid to speak up” because of their “personal safety.”