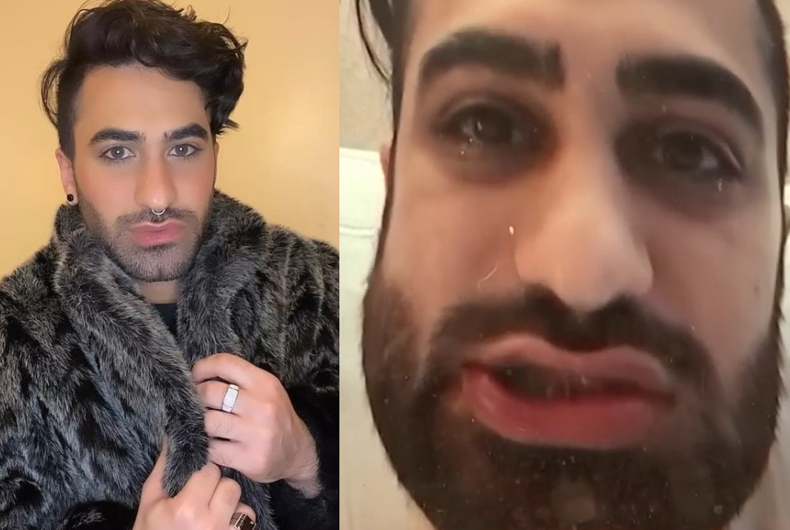 Dr. Sina Rezaie, before the attack and afterPhoto: Screenshot Instagram/NBC 4

A doctor’s jaw was wired shut after he underwent constructive surgery after he was the victim of an apparent anti-gay attack in New York City.

“He called me a faggot and then half a block later, he came from behind and kicked and punched me multiple times,” Sina Rezaie told NBC New York in the hospital, struggling to speak with his jaw broken in two places, swollen from emergency surgery, and wired shut with screws and metal plates. He described the brutal attack that happened as he got off the train by himself in Greenwich Village at 3 a.m. on Saturday.

Authorities say that the 29-year-old victim was attacked in the street and that witnesses saw him stumbling, bleeding, toward a bar where his friends Laurie Beck and Richard Delay were working.

“I just kind of saw our friend walking outside kind of erratically and I called [Delay’s] attention ‘Go see what’s going on with our neighbor, it looks like he’s distressed,'” Beck said. She grabbed paper towels and ran out to help.

Delay said that Rezaie was “holding his mouth, blood running out from the face. He said that he had gotten attacked by some guy who said something to him as he came off the train. Apparently, the guy called him a slur and then threw him to the ground, and started kicking him repeatedly.”

“I don’t know why this happened to me,” Rezaie later said, explaining that he always felt “safe” being himself in the neighborhood.

Police are reviewing security camera footage from the neighborhood but have not found a suspect.

Rezaie’s mouth will have to be wired shut for a month and doctors say that his recovery will take time.

A friend has started a GoFundMe to help Rezaie with medical expenses. It has raised over $11,000.

Pride in Pictures: The first time I felt proud