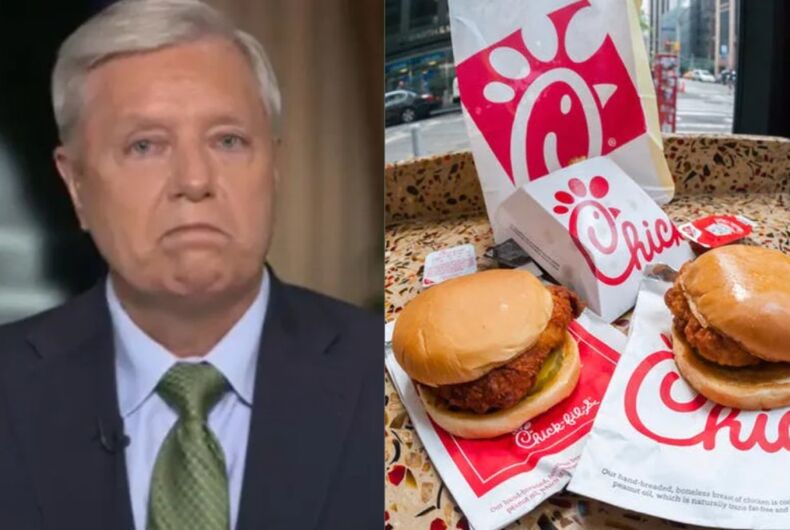 Sen. Lindsey Graham (R-SC) (who is very much straight so why would you ask otherwise?) is in a tizzy over a petition by University of Notre Dame students to keep the fast food chain Chick-fil-A off campus.

Students and faculty have objected both to the fast food chain’s history of homophobia and their lack of healthy options for meals. The group says the chain doesn’t offer sufficient healthier options or many choices for vegetarians and vegans.

“Fried chicken and potatoes,” they explained, “does not supply an array of options suitable for a diverse campus community.”

About 180 people have signed on to an open letter urging the university to consider, but that’s a declaration of war for poor Lindsey who pinky promised that he’d don camo to fight the fast food wars.

“I want everyone in South Carolina and across America to know I have Chick-fil-A’s back,” the senator tweeted with a link to a breathless Fox News article about the request.

“I hope we don’t have to,” he continued, “but I will go to war for the principles Chick-fil-A stands for.”

Chick-fil-A has become a cause célèbre for Christian conservatives. Ever since it faced criticism in 2012 for its donations to extreme anti-LGBTQ organizations, Evangelicals have flocked to the restaurant to show their support for its conservative values. So any criticism of the fast food chain can be perceived as an attack on conservative Christians themselves.

After Chick-fil-A was first caught donating to extremist groups that promote, among other things, conversion therapy, CEO Dan Cathy said that the company was “guilty as charged” because they want to promote “the biblical definition of the family unit.”

Chick-fil-A later walked back that support and said that they would stop funding organizations with “political agendas.”

Years later, they were again caught donating to groups that oppose LGBTQ equality, and the chain again promised to stop donating to them. But a report last month showed that Cathy – one of the heirs to the Chick-fil-A fortune with an estimated net worth of $8 billion – is giving money to organizations that are working to pass anti-trans laws in dozens of states this year and blocking the Equality Act in Congress.

Sen. Graham earned a zero on HRC’s latest Congressional Scorecard because of his staunch opposition to LGBTQ equality. He has consistently earned low scores from the LGBTQ organization.

I have always thought @NotreDame was one of the greatest universities in America, if not the world.
https://t.co/E4LwJjJ9oA

I want everyone in South Carolina and across America to know I have Chick fil-A’s back.

I hope we don’t have to, but I will go to war for the principles Chick fil-A stands for.