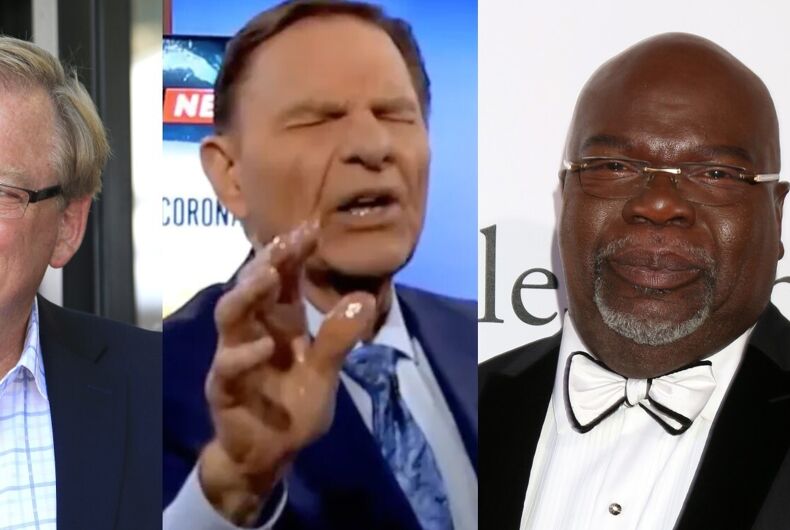 Evangelical Christians comprise a large segment of the Republican party and their influence in the larger conservative movement has led to culture wars around abortion, LGBTQ rights, and racial equality.

Recently they’ve supported and piggy-backed off the QAnon conspiracy theorists to shiv politicians they deemed too liberal, but now Evangelical leaders are starting to discover what happens when you make a deal with the devil.

QAnon is a conspiracy theory that the FBI has deemed a domestic terrorist threat. Its believers think that a shadowy international child-trafficking ring — run by Satan-worshipping Democrats, Hollywood elites, lizard-humanoids… and Tom Hanks — sexually abuse and torture kids in order to extract a psychedelic, youth-rejuvenating chemical from their victims’ pituitary glands. QAnon has been linked to death threats against LGBTQ politicians and a 2016 shooting at Comet Ping Pong, a gay-owned pizzeria in Washington, D.C.

Now that Donald Trump is out of office, the group has made thousands of predictions that he would be restored to the presidency – and a lot of the true believers were Evangelical “prophets.” One of them, Johnny Enlow, is making a different prediction, warning that “many of our most famous pastors and Christian leaders are about to be exposed as sexual deviants, pedophiles and worse.”

Madyson Marquette, a woman who says she is a former adult film actor, has stepped forward now to level allegations that turn the tables on the conspiracy theories fiercest supporters. She says she was sexually abused by Kenneth Copeland, T.D. Jakes, Rick Warren, and the late Billy Graham. She also claims that Joel Osteen was present at other pedophile “parties,” but he “didn’t do that stuff.”

“I can tell you since I’ve started speaking, now more women have come forward,” she said in a podcast with other QAnon believers. “I named Kenneth Copeland and another brave soul, she’s like, ‘Listen, I want to come forward, will you share my post?’ And people went and attacked her on her post for coming forward. … The women do come forward and say, ‘This happened to me, I have the evidence,’ and and then you’re gonna go attack them because you maybe were fooled by these pastors? The same thing with Tyler Perry, Greg Laurie, Rick Warren, all of these pastors trafficked me, and we’ve put them on a pedestal and made them gods.”

“I say a million times over, Billy Graham and the ones that have trafficked and done things to me and that are doing it now. They have a demon inside them.”

“People are like, ‘Oh, yeah, his son is sick, but we don’t believe you about Billy,’” Marquette said. “I’m like, ‘Well, probably Franklin learned it from somewhere.’”

Graham, a fervent Trump acolyte, was so dedicated to Trump he compared Republicans who voted in favor of impeachment with the Christian disciple Judas Iscariot, who betrayed Jesus Christ.

QAnon believers have not partnered up with any international organizations that actually work to prevent child trafficking. God, apparently, did not want Trump to have a second term in office.