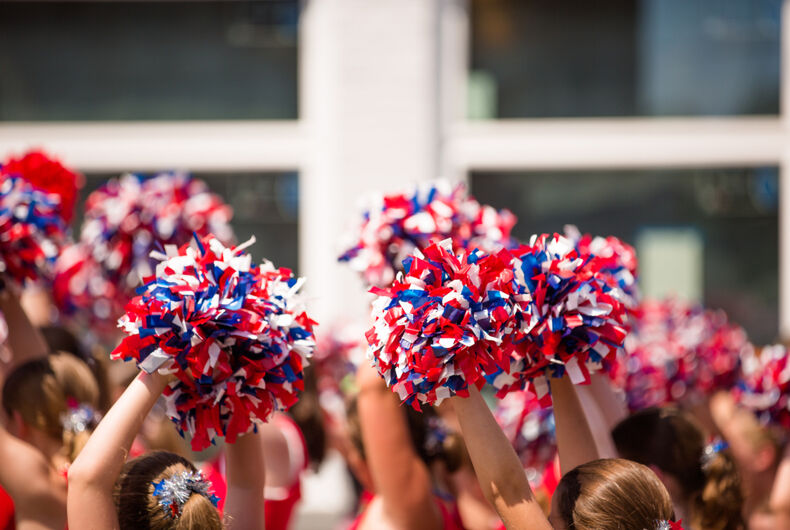 Students at Murrieta Valley High School in California are rallying for their cheerleading coach Michael Henderson, who they believe was fired after three years on the job. He says he was let go because he is gay.

Dozens of students and family members attended a rally for him yesterday, wearing school spirit colors and holding signs with messages to support him like “SAVE Coach Mike” and “Bring Back Coach Mike.”

Related: Football players taunted a 14-year-old male cheerleader, but he handled it like a pro

Henderson is now suing the school district for wrongful termination, alleging that a religious member of the school board called around asking people about his sexual orientation just before he was fired.

Henderson was good at his job, according to students, colleagues, and his record. He helped the cheer squad get to the National High School Cheerleading Championship the past two years, where they ranked sixth in 2020 and fourth in 2021.

“He always wants the best for you,” senior Kendell Winters told Patch, describing the 31-year-old coach as tough. “I hope we’re able to get him back.”

Henderson said that this past June he received a “glowing” job review from Athletic Director Darin Mott and Principal Ryan Tukua.

“There was no hint that anything was wrong,” Henderson said.

Two days after the report, though, he found out that someone had sent the school district an anonymous complaint about him. He didn’t know what the complaint alleged and he was told to just wait for it to be investigated.

“I never saw the letter,” he said. “I wasn’t even given a chance to respond. I was never interviewed about any of it.”

By June 16, he was fired and told that the schools “was taking a different direction” with the cheer program.

Henderson hasn’t been allowed to see the letter, nor does he know exactly what he was accused of. His lawyer says they have reason to believe that the letter was by “a couple of disgruntled cheer parents who were angry with their child’s position or participation level in the team.”

District Board Member Paul Diffley was in charge of the district’s investigation into the letter. Henderson’s lawyer said that Diffley is a “devout Mormon” who made phone calls to several unnamed people about the letter. Those phone calls, he argued, violated Henderson’s due process rights.

“One question related to his sexual orientation raised red flags, leading many to believe that it was a substantial factor in the district’s decision to terminate Mr. Henderson’s employment,” the lawyer said.

Diffley is not commenting on the matter, citing Henderson’s lawsuit. The school district said that it will not comment on “specific personnel actions.”

Kim Altenhofel is the parent of a cheerleader and said that Diffley and Principal Tukua contacted her about Henderson several times in the investigation. She said it sounded like he was being accused of mental abuse.

“The kids loved him,” she said, saying that she never witnessed any abusive behavior from Henderson. “They are heartbroken.”

The day after he was fired, the school district’s Board of Trustees held a meeting that was packed with students and families supporting Henderson, even though his employment was not on their agenda. Several cheerleaders spoke at the meeting and expressed support for Henderson, but the trustees were not allowed to respond.