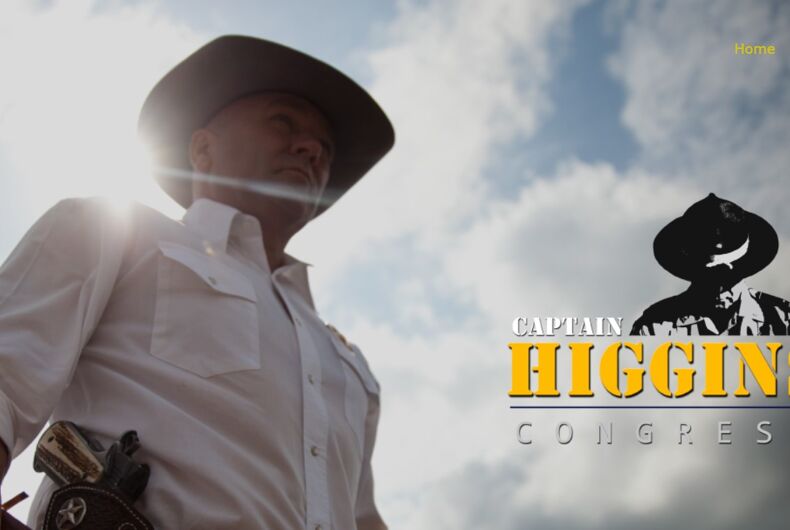 An anti-LGBTQ Congress member, who refused to wear a mask because he claimed masks are “part of the dehumanization of the children of God,” has caught COVID-19 for the second time.

Rep. Clay Higgins (R-LA) announced on Facebook that he and his wife Becca have caught the coronavirus for the second time and their son has caught it for the first time.

Related: Gay man goes on anti-mask rant in discount store before exposing himself to employees

“I have COVID, Becca has COVID, my son has COVID,” he wrote. “Becca and I had COVID before, early on, in January 2020, before the world really knew what it was.”

He said that this is “our second experience with the CCP biological attack weaponized virus,” referring to the Chinese Communist Party and the conspiracy theory that China deliberately created the virus to kill people all over the world.

Despite his criticisms of China, he stressed that “our treatment of any health concern always encompasses western, eastern, and holistic variables.” He did not explain what that means – he has opposed vaccine mandates but has not opposed the vaccines themselves. He has refused to say whether he is vaccinated.

He's declined to say whether he's been vaccinated. pic.twitter.com/XicCprnzNN

This past May, Higgins said that he would never wear a mask, citing both religious and fake medical reasons.

“Can you smell through that mask?” asked Higgins at the time. “Then you’re not stopping any sort of a virus. It’s part of the dehumanization of the children of God. You’re participating in it by wearing a mask.”

“What you’re wearing is a bacteria trap; it’s not helping your health or anybody else’s.”

Higgins, a former police officer, previously made headlines for filming a political video at the Auschwitz-Birkenau Memorial and Museum, a former Nazi concentration camp in Poland. He walked in front of the gas chambers and claimed that they were so deadly that the U.S. military “must be invincible” to have been able to defeat Germany.

The Auschwitz Memorial’s Twitter account reminded him that there is a sign telling visitors that many people died there and asking people to be silent out of “respect for their memory.”

Higgins also opposes LGBTQ rights. His campaign website promises that he will “protect marriage” and says that “non-Traditional marriage is both an individual’s rights issue and a States rights issue” (capitalization his) and “I define marriage Biblically, as between one man and one woman.”

He has even claimed that he had “one very good gay friend, he lives in Nevada,” and said that he would consider going to that friend’s wedding if he were invited.

Higgins has gotten a score of “0” on HRC’s Congressional Scorecard every session of Congress since he was elected in 2016, showing solid opposition to LGBTQ rights.

If he got the coronavirus in January 2020, he would be one of the first known cases in the U.S. He has not previously talked about how he knows he had the virus then.