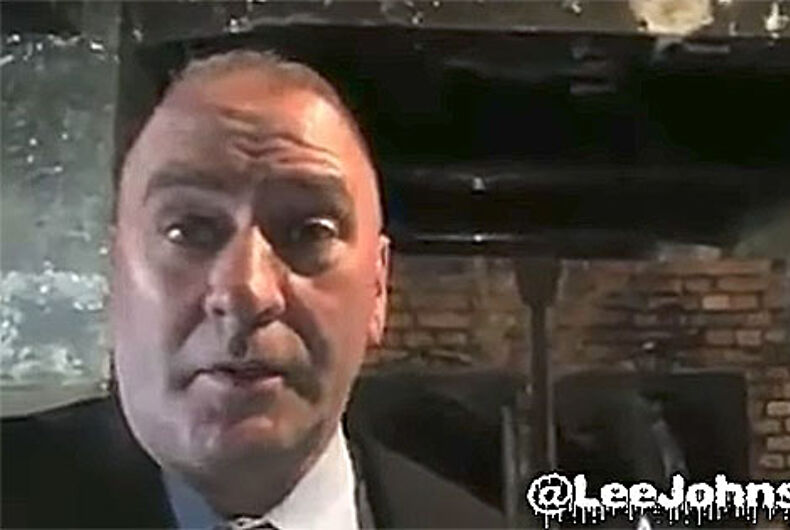 Officials at the Auschwitz-Birkenau Memorial and Museum have criticized a Louisiana congressman for narrating part of a five-minute political video from inside a former gas chamber at the former Nazi concentration camp in Poland.

U.S. Rep. Clay Higgins posted the video on YouTube Saturday, as JoeMyGod and news outlets in Louisiana reported. Recording his thoughts with what appears to be the front-facing camera of his cellphone, he walks from the tracks where millions of victims were herded into the camp, and into the museum.

The video is no longer viewable at its original page, but NOLA.com shared it on its YouTube channel.

Talking to the camera, the Republican says the gas chamber killings took only about 20 minutes and show why the U.S. military “must be invincible.”

A post on the Auschwitz Memorial’s official Twitter account Tuesday said that the former gas chambers are not a stage but a place where there should be respectful silence.

Everyone has the right to personal reflections. However, inside a former gas chamber, there should be mournful silence. It's not a stage. https://t.co/AN5aA1bYEU

Later Tuesday, museum officials posted a photo of the entrance sign to that building, asking visitors to “maintain silence here.”

This is what all visitors see at the entrance to the building where first homicidal gas chambers of Auschwitz was created by the SS. pic.twitter.com/6Mm5gTkfSl

Late Wednesday, Rep. Higgins issued a statement apologizing for what he did.

I filmed the Auschwitz message with great humility. My intent was to offer a reverent homage to those who were murdered in Auschwitz and to remind the world that evil exists, that free nations must remember, and stand strong.

My message has caused pain to some whom I love and respect. For that, my own heart feels sorrow. Out of respect to any who may feel that my video posting was wrong or caused pain, I have retracted my video…and my sincere apology for any unintended pain is extended.

As LGBTQ Nation has reported, the Nazis kept files on 100,000 people, mostly men, as part of their persecution of gays. About 15,000 were sent to camps, and at least half were killed.

Unlike their persecution and murder of more than 6 million Jews, however, there was no grand Nazi plan to exterminate gays. Nazis viewed being gay as a “public health problem” since those German men did not produce children, said Deborah Dwork, director of the Strassler Family Center for Holocaust and Genocide Studies at Clark University in Worcester, Mass.

The Nazis outlawed being gay and the Gestapo set up a special unit targeting homosexuality. In the Buchenwald concentration camp, the Nazis carried out experiments to try and “cure” homosexuality. Those sent to the camps were forced to wear pink triangles, compared to the yellow stars that Jews bore on their clothing. Gay Jews wore an emblem that combined the two colors.

Editor’s note: This story was updated to reflect that the original video was taken down, to add a new source to view that video, and to add the apology issued by Rep. Higgins.