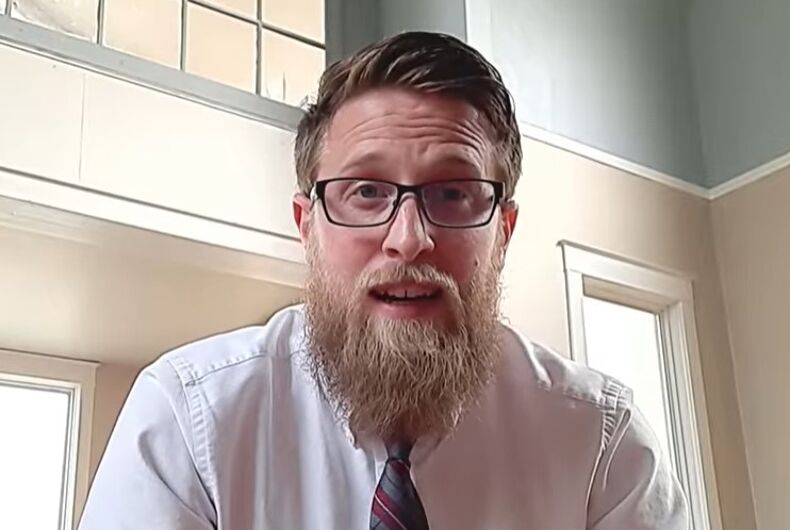 An administrator at a public college in Idaho has come under fire for extreme anti-LGBTQ statements he has made as a church pastor, but his school is sticking up for him, saying that he has never brought his hatred of LGBTQ people to work.

Logan Fowler is the director of marketing and communications at Lewis-Clark State College, and videos of his sermons at Truth Baptist Church, where he’s the pastor, have been getting attention online for their hateful rhetoric.

In one sermon, he said that Pride is actually about pedophilia and that the LGBTQ “agenda” is “coming for your children.” In another video, he said that gay men and lesbians are “vile” and complained about transgender athletes.

“Our world hates God, hates Christians, and hates the Bible,” he said.

“When we have an administrator who speaks in contrast to what we say we believe as an institution, how do we develop trust between the community and the college?” she asked.

“I feel betrayed, honestly,” GSA President Kason Seward said at the meeting. “How can we as an institution foster trust in our community when we actively protect people who are anti what we believe?”

But Pemberton said that she couldn’t do anything because Fowler made his comments when he wasn’t at work and the college “respects the First Amendment rights of its employees to express their personal beliefs.”

Fowler didn’t attend the meeting but told the Lewiston Tribune that his “impeccable 15-year track record that verifies my ability to be respectful in the workplace.”

“I am a Christian who believes the Bible is true,” he said. “I believe sin is real and so is the Savior Jesus Christ. I will not be bullied into relinquishing my First Amendment rights to practice my religion and exercise free speech as a private citizen and as a pastor in my place of worship.”

People protested across the street from the Truth Baptist Church, holding signs promoting acceptance of others, including one that said, “God created the rainbow.”

But inside the church, Fowler was back to preaching hatred.

“The sodomite lifestyle is wrong,” he said. “Repent and have God’s mercy.”

In other posts, he said that the publicity he’s getting is spreading “the truth that sodomy is still sin.” In another sermon posted to Facebook, he says that “sodomy” is “an abomination.”