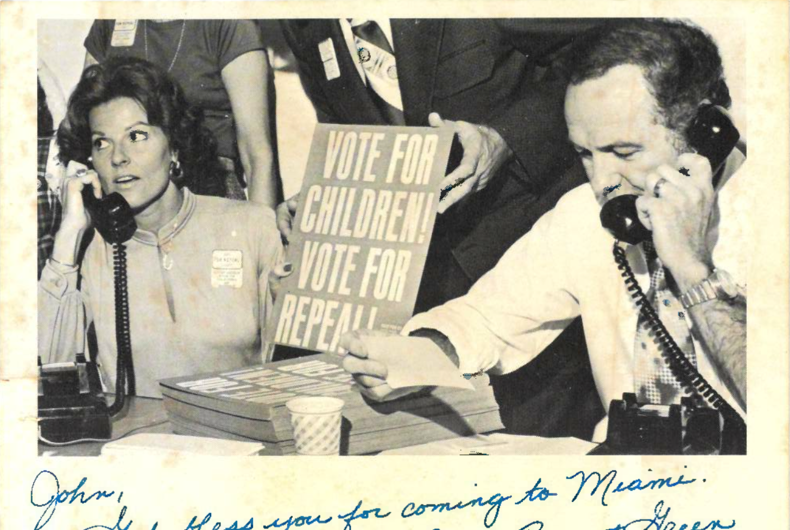 The granddaughter of arch anti-LGBTQ activist Anita Bryant is getting married to another woman, and she doesn’t know whether to invite her homophobic grandmother to her wedding.

Bryant’s granddaughter Sarah Green said that her grandmother refused to even believe that she’s gay after she came out on her 21st birthday. The 81-year-old Christian conservative activist is still praying for Green to find a husband.

Related: A public school teacher says he was fired for coming out to students

Now Green is getting married. Like many queer people, she’s not sure whether to invite her grandmother. But unlike most people, her grandmother organized one of the first major anti-LGBTQ campaigns in the country, accusing gay people of being pedophiles.

Bryant won the 1958 Miss Oklahoma pageant and was a brand ambassador for the Florida Citrus Commission, but she’s best known for mounting the infamous “Save Our Children” campaign in the 1970s to repeal a local ordinance in Dade County, Florida, that banned discrimination on the basis of sexual orientation.

Bryant focused on gay teachers, saying that gay people are child molesters who go into teaching to hurt kids.

“Homosexuals cannot reproduce, so they must recruit,” she said, also saying that gay people were “human garbage.”

“What these people really want, hidden behind obscure legal phrases, is the legal right to propose to our children that theirs is an acceptable alternate way of life,” she said in 1977. “I will lead such a crusade to stop it as this country has not seen before.”

And she did. Jerry Falwell Sr. flew to Florida to help out as she put together the first major anti-LGBTQ campaign, coming up with arguments and tactics that would be used by anti-LGBTQ activists for decades.

That didn’t stop her granddaughter Sarah Green from coming out to her on her 21st birthday.

Green said that Bryant sang “Happy Birthday” to her and told her that she would have a husband one day.

“And I just snapped and was like, ‘I hope that he doesn’t come along because I’m gay, and I don’t want a man to come along,'” Green said on the podcast One Year.

Bryant then told her granddaughter that homosexuality doesn’t exist.

Robert Green – Sarah Green’s father and Anita Bryant’s son – said that his mother’s “face froze” when his daughter came out.

“All at once, her eyes widened, her smile opened, and out came the oddest sound: ‘Oh,'” he said. “Instead of taking Sarah as she is, my mom has chosen to pray that Sarah will eventually conform to my mom’s idea of what God wants Sarah to be.”

“It’s very hard to argue with someone who thinks that an integral part of your identity is just an evil delusion,” Green said. “She wants a relationship with a person who doesn’t exist because I’m not the person she wants me to be.”

She said she doesn’t know if she should invite her grandmother, unsure whether Bryant will be offended if she’s left off the invitation list.

“I think I probably will eventually just call her and ask if she even wants an invitation, because I genuinely do not know how she would respond,” she said. “I don’t know if she would be offended if I didn’t invite her.”