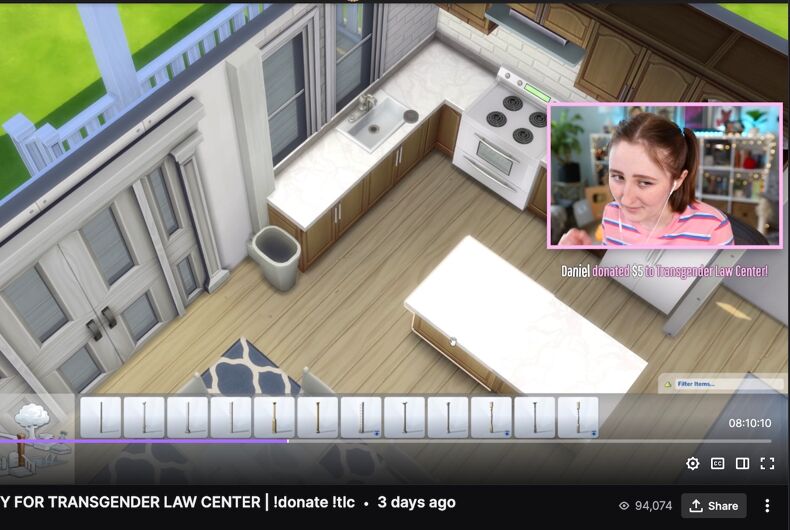 A twitch streamer and trans ally raised $15,000 for the Transgender Law Center by playing The Sims 4.

Kayla Sims, who goes by the username lilsimsie, decided to host a charity stream for her 443 thousand followers. Her goal was to raise $10,000.

Sims emphasized the responsibility she feels to use her platform to do good.

“I know there are a lot of trans kids that watch my content online, and I want them to know that they are loved and supported,” she said. “I’ve been given a massive platform, and it’s really important to me to use that platform to give back.”

“I don’t do this alone,” she continued, “I am constantly blown away by the kindness and generosity of the people in my Twitch community. Together we can do so much, and this weekend we raised over $15,000 in just a few hours for the Transgender Law Center.”

The Transgender Law Center is the largest trans-led organization in the United States and fights for equitable laws and policies for the transgender community.

Sims couldn’t believe the outpouring of support she received.

“Not only did we raise $15,000 for the transgender law center today,” she tweeted, “our community has now raised $800,000 for charity on our twitch channel. you are the coolest, and i am so lucky to be apart of such an incredible, generous group. thank you.”

not only did we raise $15,000 for the transgender law center today, our community has now raised $800,000 in total for charity on our twitch channel. you are the coolest, and i am so lucky to be apart of such an incredible, generous group. thank you 💜 pic.twitter.com/5390lAS11H

Her most recent fundraiser comes about a month after Twitch announced it has added the option for users to include a transgender tag on their videos, along with hundreds of other new identity tags. The transgender community had been petitioning the company to allow this tag for years, as Twitch already allowed the use of a variety of tags based on users’ interests.

The trans community wanted to use the identity tag to connect with one another, but Twitch maintained it would only lead to increased online harassment.

“We intentionally designed that system for creators to be able to describe what they were streaming, not who they were or what they stood for,” Twitch explained in its announcement of the new tags. “We have maintained this distinction since that time, and we were wrong.”

“We’d like to thank our trans community for originally requesting the ‘transgender’ tag,” the company added, “and for their passion and persistence in pursuit of that request. This has been one of the most popular requests we’ve heard, and the simple truth is that we should have done this sooner.”

A Pride playlist: 10 songs to change your life