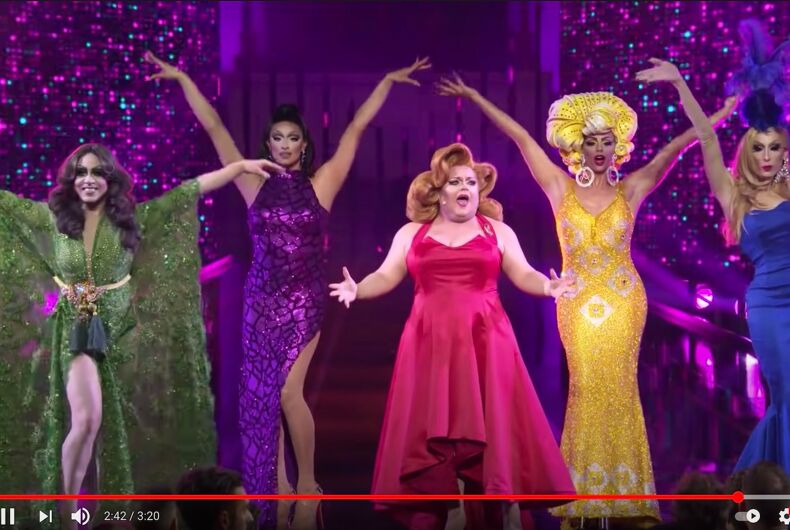 You may not realize it, but you have one of the strongest tools for self-empowerment right at your fingertips. YouTube is full of fun, catchy,  thought-provoking, and moving songs and music videos with LGBTQ-affirming lyrics. These tunes can help you gain emotional strength when coming out and take pride in who you are. They can also serve as the ideal prom song or wedding dance tune and will just plain make you feel happy.

When David Bowie died, the world lost one of its most beloved queer icons. Though the jury is still out on whether he was queer, he always embraced gender fluidity and sang about queer issues when it was not the popular thing to do. The genius of “Rebel Rebel” lies in its vagueness. We do not know the gender or orientation of the person Bowie is singing about in this love song — or if the protagonist even has a gender — nor do we need to. The underlying message is that being authentic is something to be admired and loved.

Sara Bareilles wrote this song with Jack Antonoff about a friend who was coming out. With lyrics like, “You can be the outcast/Or be the backlash of somebody’s lack of love/Or you can start speaking up,” it encourages listeners to take a stand against bullying and come out to fight prejudice. “Maybe,” sings Bareilles, “there’s a way out of the cage where you live/Maybe one of these days you can let the light in/ … Why don’t you tell them the truth?”

Lady Gaga, who proclaimed her bisexuality in 2009, took her career to new heights with the ultimate Pride anthem. This song is the perfect antidote to the attitude that queer people decide to be queer, or that God won’t love us for being gay. Gaga sings that her mother told her “we are all born superstars” and encouraged her to be whoever she wanted to be. It goes on to give the perfect set of instructions for a happy existence (“Don’t hide yourself in regret/Just love yourself and you’re set”). And yes, the LGBTQ+ community gets a direct shout-out.

Aretha Franklin’s dance song is not specifically for queer audiences, but its lyrics and constant repeating of the word “pride” make it a natural anthem. It is the perfect song to listen to when you are dealing with people who are trying to dim your light. The deepest love, the song argues, is not the one you have with a partner, but the one you have with yourself.

Macklemore and Ryan Lewis are among the finest of straight allies. “Same Love” is a beautiful ballad that puts a mirror up to an America that thinks all LGBTQ people are equal, but hasn’t afforded us the same respect our straight counterparts have (“The right-wing conservatives think it’s a decision/And you can be cured with some treatment and religion/Man-made rewiring of a predisposition/Playing God/Ahh nah, here we go/America the brave/Still fears what we don’t know”). The song is also critical of a homophobic hip-hop industry. It is a romantic song too, with out artist Mary Lambert declaring her love for a female partner (“She keeps me warm”).

Diana Ross is another beloved queer icon and this song is a big reason why. The message is simple but powerful: “I’m coming out/I want the world to know/Got to let it show. … I’m completely positive. … Oh, I’ll make it through.” It also has a message for judgmental folks. “I’m spreadin’ love/There is no need to fear.” This song can give you so much strength on your coming out journey and is just really fun to dance to and sing along with. This clip comes from her famous Central Park concert in the early 80s.

Blur’s dance-pop hit “Girls and Boys” encourages love with anyone as long as it’s “someone you really love.” The lyrics bask in the glory of gender ambiguity: “Girls who are boys/Who like boys to be girls/Who do boys like they’re girls/Who do girls like they’re boys.” Love is love is love.

It’s still a sad fact of life that being queer — or being different in any way — can make you a target of bullying, whether at school, online or both. Christina Aguilera knows what it’s like. In elementary school, she was made fun of at talent shows, according to US Weekly (And who’s laughing now? Hmmm). In this stunning ballad, written by out songwriter Linda Perry, she sings, “Now and then/I get insecure/From all the pain/I’m so ashamed.” The accompanying video shows a young girl being beaten up by a gang; a girl who seems like she might have an eating disorder examining her very thin body in the mirror; two gay teens sitting on a public bench, about to kiss; a trans woman getting dressed for the day. Aguilera reminds us that being different is in fact wonderful, even beautiful, and as far as she is concerned, “Words can’t bring me down.” This is a song that had a deep impact on me when I was younger, and I think it will move you as well. When you are verbally teased, heed Christina’s advice, and remember they are just words and only have as much power as you give them.

“I Am What I Am” was composed for the gay musical La Cage aux Folles. It is one of those songs that has enjoyed a life far beyond what it was originally created for. It is a song that encourages queer people — especially gay men and trans women — to live openly, without explanation or “excuses,” and to enjoy a full life, regardless of anyone’s judgment. Our time is short on this earth, the song says, so “it’s time to open up your closet.” And it, of course, also encourages the straight community to embrace us. It was recently sung by RuPaul’s Drag Race All Stars 2 in the LOGO clip below.

Before Katy Perry released “I Kissed A Girl,” Jill Sobule came out with a song that shares the same title. Sobule’s song is about the joy and discovery of a first lesbian or bisexual kiss. It acknowledges that because of society you might feel guilty at first, but then you’ll realize you have to be true to yourself. It may not change the world, the song says, but you’ll feel good for being honest with yourself.

Katy Perry’s song is similar, but more about bi-curious experimentation, as the protagonist is still in a relationship with her boyfriend. Both songs encourage you to kiss whoever you want — and it doesn’t mean you have to label yourself queer or in love or that you have to embrace any kind of label at all.

Dr. Logan Jones, Psy.D., an NYC-based Clinical Psychologist. He is the Head of Practice at Clarity Therapy NYC, a therapy group that provides personalized and customized counseling services based on who you are, what you need, and the life you want.

A Twitch streamer raised $15,000 for the Transgender Law Center by playing The Sims 4