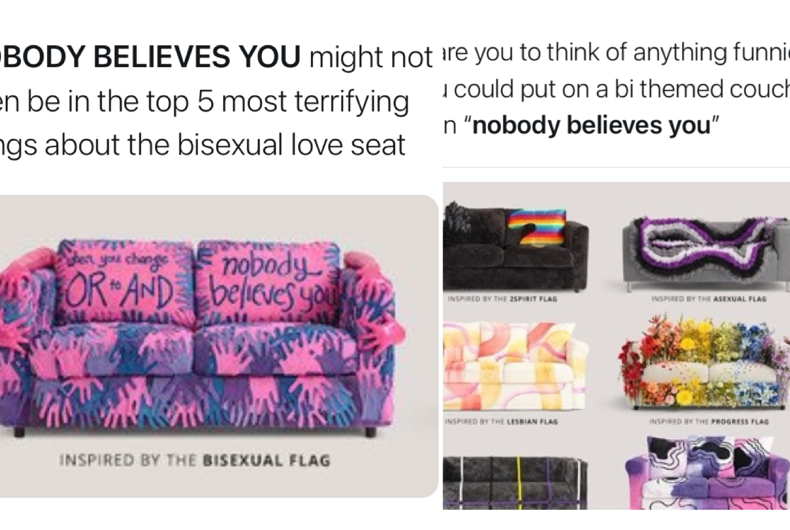 Out of all of IKEA's Pride-inspired ones, the bisexual flag-inspired loveseat design didn't go over well the most.Photo: Screenshots/Twitter

IKEA Canada has launched a Pride campaign, LOVE SEAT, featuring “10 loveseats inspired by different Pride flags.” It doesn’t appear the loveseats are actually available for sale (yet), and they were actually designed by LGBTQ designers from Canada.

Of course, this did not stop Twitter from being either surprisingly impressed or absolutely repulsed by them. The bisexual design, however, was universally panned despite the good intentions.

The bisexual loveseat was designed in blue, purple, and pink after the bisexual Pride flag. Sticking out of the loveseat, though, is a bunch of fake two-dimensional and three-dimensional hands, and the two cushions read, “When you change OR to AND / Nobody believes you.”

The Ikea pride collection is so insanely cool??? pic.twitter.com/yNfbcvrfjx

Be on the lookout for my new chapbook, Unusable Progress Couch

Unsurprisingly, anti-LGBTQ people also took the opportunity to bash the “creepy” design and suggest it’s part of some agenda.

IKEA is selling a “BiSEXUAL” love seat, that’s covered with creepy looking hands, with the words “nobody believes you” written on it.

If you have not seen the documentary film #BuckBreaking it is imperative you watch it now at https://t.co/JcGCoxPOqC pic.twitter.com/SkF794IAIX

Much of the backstory for the design was also online, but not in the screengrabs shared to Twitter. The inspiration behind the loveseat, Brian Lanigan, took to Twitter to explain it.

“The line “when you change ‘or’ to ‘and’, nobody believes you” is from a poem I wrote in high school about bisexual erasure I experienced from an ex-partner and others,” he shared.

“I’m a spoken word poet and the hands are meant to represent the audience reaction, especially those of other bisexual folks who would approach me after performances and share their story with me.”

Hey y’all, I’m the featured bisexual community member whose story this love seat is based on! “When you change ‘or’ to ‘and’, nobody believes you” is a line from a poem I wrote in high school about my experiences with bisexual erasure.

He shared the poem, which he delivered at the Toronto Poetry Slam Finals in 2015.

“The original full line is ‘it’s okay to love boys or girls, but when you change ‘or’ to ‘and’, nobody believes you.'”

Hey everyone, I’d love to explain the NOBODY BELIEVES YOU love seat! The line “when you change ‘or’ to ‘and’, nobody believes you” is from a poem I wrote in high school about bisexual erasure I experienced from an ex-partner and others.

Btw for those confused by the excerpt from the poem, the original full line is “it’s okay to love boys or girls, but when you change ‘or’ to ‘and’, nobody believes you”

I’d like to preface your watching of it with the fact that I was 15 when I wrote this, so over 10 years ago. Still it means a lot to me that others want to hear it!https://t.co/9Px2uqtdWo

The bisexual loveseat, in addition to the non-binary and genderfluid loveseats, were designed by Charlotte Carbone, a queer woman who was the winner of the Canadian reality competition show Stitched.

The other IKEA Canada Loveseats are representing the two-spirit flag, pansexual flag, lesbian flag, the Progress Pride flag, two different renditions of the transgender flag, and the asexual flag. They were designed by Madison Van Rijn, Ali Haider (not the singer), and Bianca Daniela Nachtman. Van Rijn and Nachtman are queer, while Haider is described as an ally.

The ten seats are not actually available for purchase, but they will be on display in select stores, according to IKEA Canada’s website. The actual loveseats were also featured in a video released last week by the company.

The stories of ten LGBTQ+ people, including Lanigan, were shared while they sat on the loveseat designs they inspired.

Sorry to be a pride grinch but Ikea hired designers (mostly queer, not sure if any are trans or nb and including one who identifies as an ally to the 2SLGBTQ+ community) to come up with ideas for pride flag themed couches,,,,,,
https://t.co/dyAKxjlKJU

While the designs had a much more meaningful backstory than many assumed, the explanation, unfortunately, came well after they became the source of Twitter users’ ire or humor.

Lanigan got in on some of the jokes too, though.

Apparently they’re not available for purchase but will be on display at some stores [more info: https://t.co/ddr5gFCgvl] https://t.co/0z9ksErzNc

i go to ikea. i sit on the bisexual couch. the couch whispers “nobody believes you” in my ear while its disembodied pink arm touches mine. this is the true bisexual experience.

I think the line from @braino_drano 's poem I would have picked for the bi Ikea couch is "I don't want to fuck everybody in this room."

Like go on, sit there I dare you. pic.twitter.com/K8WtyuHnTo

“Okay now put pink hand no. 36 on left arm rest, decide you love more than one couch, then accept that nobody will believe you” https://t.co/EAnqC19xHg

Dressing up as the NOBODY BELIEVES YOU bisexual couch for Halloween pic.twitter.com/oDsoO3uEJF

NOBODY BELIEVES YOU might not even be in the top 5 most terrifying things about the bisexual love seat pic.twitter.com/vzQxEgvNFu

buying two bisexual couches so i can have one that just says nobody believes you twice https://t.co/LScBGXsC58

Inviting my friends to drop acid at my place and as soon as we do I flip around the cushions on my sofa to 'NOBODY BELIEVES YOU' https://t.co/Ix5T4BqGod

I want this so badly but I can't see where to buy them. Looks like it's more of an art project, which is cool for Pride month but I'm sad I can't buy it 😂 pic.twitter.com/p6OLtMmcuS

(ik they’re “art pieces” btw)
how the FUCK are you gonna sit on this pic.twitter.com/C6XEBS7Lit

Ikea Bi Pride couch – I know it was a Bi designer. I think it is an impactful peice of art. It is not something I feel exudes pride. Its message is a real one. So the negative reaction makes sense in that way. We get treated as illegitimate all the time as Bi folx. pic.twitter.com/MDpDj4enB0

A Pride playlist: 10 songs to change your life