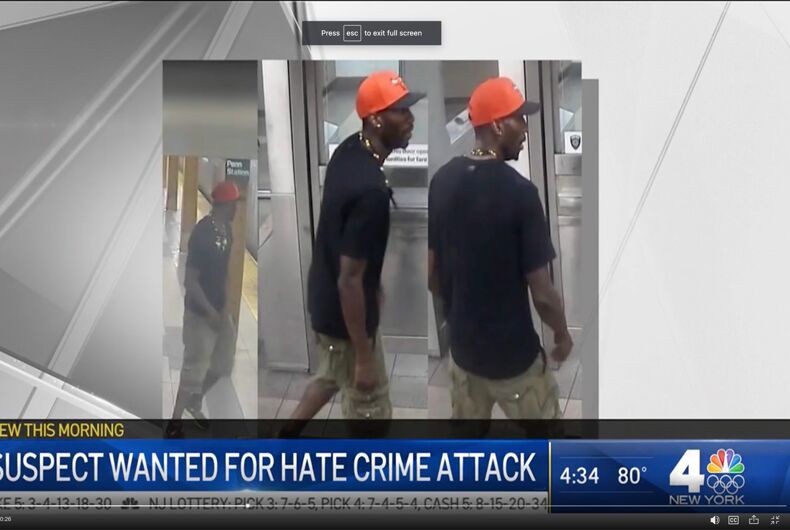 In an apparent hate crime, a man stabbed a 29-year-old man on the New York City subway early Monday morning.

The suspect was reportedly shouting anti-gay slurs to several passengers on the northbound 2 train before zeroing in on the victim.

Related: A block party protest is held outside of gay bar where Black woman was dragged by hair

The attacker approached the victim and said, “Yo big ass want to sit down with your legs crossed, faggot.” The victim and suspect then began to argue and ultimately got off the train together during the confrontation.

On the platform, the suspect stabbed the victim in the side of his chest and torso before running away.

The victim did not notice he had been stabbed until he got back on the train. He was then able to get himself to a hospital and escaped without life-threatening injuries.

The NYPD Hate Crimes Task Force is investigating the incident but still has not identified the suspect. Pix 11 reported that the NYPD released surveillance photos of the suspect and is asking the public to help identify him.

He is described as approximately 5′ 11″ and was last seen with a gold chain around his neck and wearing a red Chicago bulls hat, as well green cargo shorts, a black shirt, and multi-colored sneakers.

Just last week, a 27-year-old transgender woman was also stabbed on the subway with a screwdriver.

Nina Grey was on the southbound A train on June 23 when a man yelling anti-trans slurs approached her. Grey got off at the next stop, but the attacker followed. She maced him, but he still managed to stab her in the ankle and forehead before fleeing. The NYPD Hate Crime Task Force is also investigating this attack.

Both attacks occurred amidst a rise in subway crimes, though the MTA recently announced that crime has sharply decreased over the past couple of weeks due to increased police presence.

“We have seen a downward trend which is great,” MTA Chief Safety Officer Pat Warren said, “but it is not sufficient to, to make us take our foot off the pedal, we realize that we have got to get to a point where our customers feel comfortable in our system.”

A Twitch streamer raised $15,000 for the Transgender Law Center by playing The Sims 4