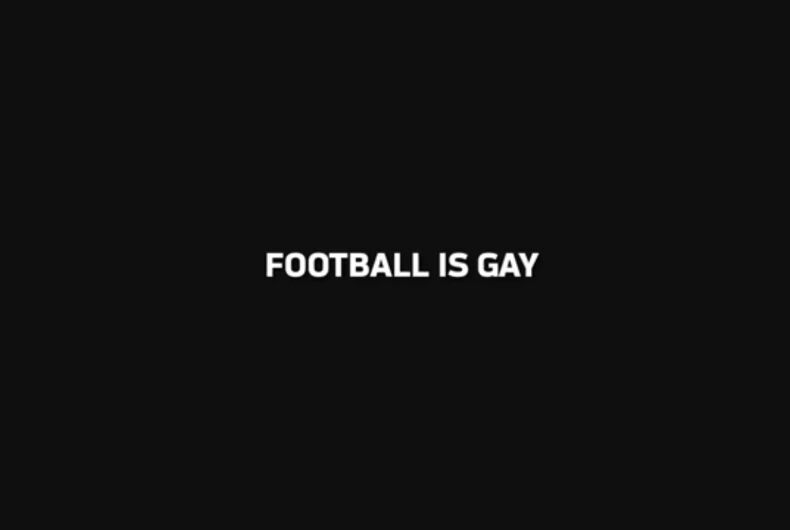 The National Football League (NFL) has partnered with the Trevor Project after NFL player Carl Nassib’s coming out to “redefine” football as “inclusive of all different types of fans, coaches and players.”

“The NFL stands by the LGBTQ+ community today and every day.”

The video shows simple text reading “football is gay,” then, the last word is consistently replaced, first to say that “football is lesbian,” followed by “beautiful,” then “queer.”

“Football is everything. Football is for everyone,” the video concludes before encouraging viewers to support or seek the support of those at the Trevor Project, a non-profit advocacy group for LGBTQ youth.

The NFL stands by the LGBTQ+ community today and every day.

For more information on how you can help the @TrevorProject, visit https://t.co/YtauzLAHIF pic.twitter.com/bkdWkAZ3vF

The league’s director of diversity, Sam Rapoport, said in a statement to Outsports,  “I am proud of the clear message this spot sends to the NFL’s LGBTQ+ fans: This game is unquestionably for you. I will be playing its first line over and over in my head all season.”

“This spot is about celebrating Pride, and the importance of inclusion. It’s imperative that we use our voice and leverage the NFL platform to drive positive change, which includes supporting what our players care about and what they stand for,” the league’s chief marketing officer Tim Ellis said.

Nassib, a defensive lineman for the Las Vegas Raiders, came out publicly last week as gay in an Instagram post. Nassib included a video and several screenshots of notes from his phone, explaining his decision to share the news now.

He also announced a donation of $100,000 to the Trevor Project and encourage his fans and supporters to do the same. Nassib said in his announcement, “Studies have shown that all it takes is one accepting adult to decrease the risk of an LGBTQ kid attempting suicide by 40%. Whether you’re a friend, a parent, a coach, or a teammate — you can be that person.”

The NFL would later match his donation, and reiterated that message by sharing the 40 percent statistic in their ad.

In September, Nassib is set to become the first NFL player to take the field after coming out.