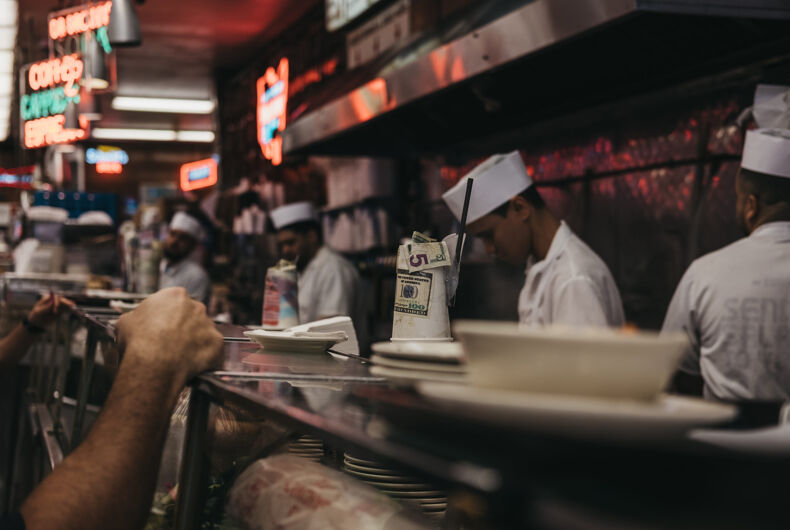 New York, USA - May 29, 2018: Customers waiting for food at the counter in Katz's Deli in New York, iconic kosher-style delicatessen that has been open since 1888.Photo: Shutterstock

The email message from Mendy’s delicatessen in Brooklyn was like many of the LGBTQ-friendly greetings and promotions that straight-owned businesses put out during Pride Month – a trend that has been referred to as Rainbow Capitalism.

“EAT WITH PRIDE,” the message beamed, in rainbow-colored letters, all caps, set above images of food that Mendy’s serves, also in rainbow hues.  “Celebrating diversity in all its many flavors, this month and every day.”

But that cheery message, from a kosher deli with Jewish owners and a largely Orthodox Jewish customer base, was followed by an apology that isn’t part of the standard Rainbow Capitalism playbook.

“To Our Customers,” it read, “Mendy’s would like to apologize for an email that went out this morning which you may have found offensive. We work with a non-Jewish company on marketing and promotions and, as a result of a miscommunication, the wrong campaign was launched on our behalf.

“We are now working with them in order to educate them so that they can better serve the needs of our community going forward,” Mendy’s continued. “We appreciate your understanding and look forward to serving you again soon. Shalom aleichem. [Peace be upon you].”

Offensive? Miscommunication? If this is “the wrong campaign,” what would the right campaign be?

To encourage customers to “EAT WITH PRIDE,” the email offered 10 percent off the price of one order, valid from June 21 to June 27. But again, the business subsequently said something was “wrong.”

“This is our old logo,” Kasbah said in a message on Facebook. “Something here is wrong and we are looking in to it.”

Whoops! Call it The Case of the Accidentally-Supportive Stance Toward the LGBTQ Community During Pride Month.

According to the Jewish Telegraphic Agency, a New York-based media company that first wrote about the Pride messages, both Mendy’s and Kasbah work with 9Fold, a marketing firm that promotes restaurants. Writer Shira Hanau quoted a Mendy’s employee as saying the LGBTQ-related email had been sent “without talking to the owner.”

In a separate posting on Facebook, the owners of Kasbah BBQ & Grill updated their previous statement, saying they didn’t put out the celebratory message that bore their logo.

“We did not send out any of the emails, not the first or the second, it was done by 9Fold, the delivery company that we work with,” Kasbah’s owners said.

“We the owners live in Israel and only found out about it late last night. We would not approve the first or the second email. We love every Jew and human equally no matter their race color or opinion.”

Hanau noted in her article that the “celebrating diversity” messages stood out because the Jewish community is not universally supportive of LGBTQ people or Pride Month.

The conflicting messages also caught the attention of Rabbi Mike Moskowitz, a Jewish scholar who has been a strong advocate for LGBTQ Jews.

A former campus rabbi at Columbia University, Moskowitz is currently the Scholar-in-Residence for Trans and Queer Jewish Studies at Congregation Beit Simchat Torah, a synagogue in Manhattan that serves the LGBTQ community.

Writing on Facebook about Kasbah’s promotion, Moskowitz said he sees no reason for the restaurant to take back its original positive message about diversity. “To be clear, we are very supportive of it and hope that you do not apologize for celebrating people,” he said.

Some commenters were critical of Mendy’s for backsliding the way it did, and critical of both businesses if they didn’t know what messages their marketing firms were sending out.

A few knocked companies that launch Pride-themed promotions in general, saying they tend to be “more about marketing than about sincerity.” Still others stayed positive and said they agree with the original message.

“Please do not retract,” one said. “We’re happy that you’re supporting Pride.”

“I was thrilled to see that you had a pride campaign,” another said, “and would definitely want to support any kosher establishment that does.”